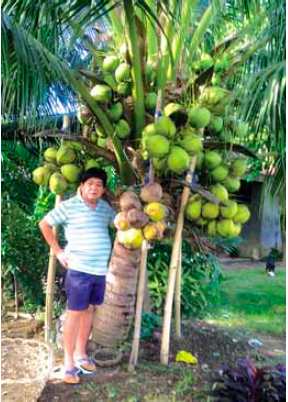 Dr. Pablito P. Pamplona, a DA Outstanding Agricultural Scientist Awardee in 1997, is now a coconut, oil palm, and rubber farmer who uses technologies generated largely in Malaysia which are transferable to Philippine conditions.

Why the Philippine Coconut Hybridization Program Should be Expanded

The term “Green Revolution,” as used in this article, is defined as “crops that provide abundant food supplies for Third World countries (while helping) bring prosperity to farmers in rural communities.”

“Green Revolution” crops came about through the work of the famous Nobel Prize winner Dr. Norman Borlaug on wheat in Mexico prior to the 1950s. The “Green Revolution” became more spectacular with the discovery of hybrid “Miracle Rice” or IR8 in the Philippines in the 1960s.

Prior to that time, Third World countries were on the brink of massive food shortages and famine caused by the increasing human population—whose rate of increase was higher than the rate of increase in food production. The yield of crops like rice, corn, and oil palm was less than a ton per hectare. With the advent of “Miracle Rice,” the forerunner of current generations of high yielding varieties (HYVs) of rice and its hybrids. It was created by crossing the tall Indica variety and a dwarf rice variety from China which increased rice potential yield to four tons per hectare (t/ha).

Hybridization was then applied successfully to many other food crops such as corn, oil palm, coconut, tomatoes, and eggplant. Biotechnology in the form of tissue culture was later applied to Cavendish and Lakatan banana, corn, eggplant, and tomato crops, among others. Pioneering breeders of oil palm confessed that the “Miracle Rice” was their inspiration for developing hybrid oil palm trees to increase yield from less than one to four tons per hectare per year.

The abandonment of the research on, and commercial production and distribution of coconut hybrid seedlings, to coconut farmers in the Philippines brought back the coconut industry to the pre-“Green Revolution” era of the 1950s. It is not surprising that the farmers in the coconut industry are in the survival mode rather than enjoying the thriving economy that farmers using “Green Revolution” crops are used to.

Today, more advanced tools of science, including biotechnology and epigenetic reprogramming, are being used by scientists (many with Ph.D.s) to push the potential yield of hybrid crops to over 10.0 ton/ha per year. The great potential and opportunities that increasing the potential yield of coconut can create has been obviated by the abandonment of the hybridization program as per Philippine government policy.

As a result, in the country, coconut has fallen out of the list of “Green Revolution” crops that have been cultivated for higher yields—and the losses in the form of the food that could have been produced and the prosperity the coconut farmers could have enjoyed is immeasurable.

2. The abandonment of the coconut hybrid program is bad science

It is a known fact that hybrid plants require higher levels of fertilization, but this is because the yields are also high.

Therefore, it was a wrong policy direction to abandon the hybrid program. What the government should have done was to show farmers the benefits of fertilizing coconut hybrids; it should also have given the farmers the means to apply adequate fertilization.

Success in crop production for high yields and income using hybrid seeds is generally tied to adequate fertilization, at
rates higher than those used for traditional varieties, but with yields two or more times higher. Irrigation is also needed at times for higher yields. Plants are living factories; the output is determined by the input. One of the major inputs for higher yield is nutrients in soil made adequate by fertilization.

A major advantage of the use of hybrids is the higher efficiency of land use. Four tons of food produced in four hectares using a traditional variety can be produced in just one hectare of land using hybrids. This will save agricultural lands which can be used for the production of other crops. Therefore, the coconut hybrid program should be restored and expanded to increase yield, help farmers overcome poverty, and for the more efficient use of land resources.

The massive commercialization of hybrid/high yielding crops has produced abundant supplies of food, helped farmers overcome poverty, and created prosperity and a thriving economy in many rural communities of Third World countries. These crops include wheat in Mexico, rice in China and India, and oil palm in Malaysia, Indonesia, and Thailand.

Farmers using hybrid rice, corn, oil palm, and other crops are thriving today as adequate fertilization of hybrid brings about high crop yields and helps increase farmers’ income. Rice and corn hybrids are fertilized with 12 to 14 bags of fertilizer per cropping or 24 to 28 bags of fertilizer of two croppings per year. These increase the yield of these crops from 2 to 8 t/ha per cropping. The income of a typical farmer planting and fertilizing hybrid rice and corn is five times that of the income of a typical coconut farmer.

Lakatan and Cavendish banana produced through tissue culture are fertilized at the rate of 43 to 45 bags/ha per year. Indeed the Cavendish/Lakatan farmers of Mindanao are among the richest farmers of the country today and probably in the ASEAN as well. The yield of fertilized Lakatan/Cavendish banana ranges from 25 to 50 t/ha per year depending on the level of fertilization.

Twenty years ago a typical Lakatan farmer could hardly buy a motorcycle to serve as farm service. When the increasing number of Lakatan farmers adopted the fertilization rate being used for the Cavendish banana, there was a spectacular increase in the yield of Lakatan. Lakatan fruits are now abundant throughout the country. Many Lakatan farmers now own brand new pickups, and more quality farm jobs have been created.

Since last year, the pummelo farmers of the Cotabato and Davao provinces have produced an abundant (and sometimes even a surplus) supply of fruits. The reason is that most pummelo farmers shifted from Department of Agriculture’s (DA) recommendation of using 3 to 4 kilograms (kg) of fertilizer to 12 kg/tree per year or 48 bags/ha per year. This resulted in a spectacular yield increase from less than 10 to over 40 tons/ha per year.

As a result, the supply of pummelo reaches many major towns and cities of the country. The incomes of pummelo farmers allows them to buy brand new vehicles, construct new concrete houses, and buy household appliances. Government assistance is needed so that pummelo farmers can export their surplus produce to Hong Kong and even Europe.

Malaysian oil palm farmers using high yielding oil palm hybrid coupled with adequate weeding and fertilization get incomes high above the poverty threshold level. Oil palm is fertilized at the rate of 18 to 22 bags of fertilizer/ha per year. Consequently, they produce an abundant supply of vegetable oil for the world, exporting US$ 5.0 billion worth of vegetable oil produced in 5.5 million ha.

At the other extreme are the Filipino coconut farmers, the poorest in the ASEAN, planting traditional coconut varieties and growing them weedy as jungle trees that hardly ever see a grain of salt, much less inorganic or organic multinutrient fertilizer. The volume of their exports is only US$ 1.2 billion but they use over 3.56 million ha.

A question often asked is: are the high levels of fertilization like those being used for banana detrimental to the crop and the environment? The answer is no. Soil health indicators of land used for Cavendish and fertilizer at 45 bags/ha per year since 1970 and oil palm fertilized at 22 bags/ha per year in Malaysia remain on the positive side.

A challenge to the maximization of the yield of coconut hybrid is to overcome the Philippine coconut farmer’s resistance to using fertilizer. Among the major food crops, coconut is the least fertilized crop in the Philippines. Rice and corn farmers are convinced they have to fertilize their crop to increase yield but this is not so with most coconut farmers. Rice and corn farmers fertilize their fields even before the crops are planted through basal application. Many of the government-distributed fertilizers intended for coconut trees end up in rice and corn fields.

The author noted in his research that coconut farmers have inherited the traditional resistance to fertilization. Government research and extension services have failed to overcome this resistance as they have with rice, corn, Lakatan banana, pummelo and other farmers.

Many coconut farmers believe that the coconut trees are a gift from God and don’t need fertilizer. They conform to the multigenerational unscientific belief that a coconut tree can become “addicted” to fertilizer—that coconut trees, once fertilized, will forever need fertilizer in order to bear nuts. This is not true. This wrong belief has brought about a multi-generational curse: poverty. The curse should be broken in this generation of coconut farmers so that they can begin to prosper. One approach could be to remind them that the Bible teaches that when a tree is not productive, it has to be cultivated and fertilized (Luke 13:6-9).

Fertilizer field trials carried out by Philippine Coconut Authority (PCA) researchers on a limited scale (as compared to extensive trials on rice and corn) show that even traditional coconut varieties show a significant increase in yield when fertilized with salt and/or multinutrient fertilizers. The effects, however, are not convincing enough for coconut farmers, as they cannot readily see the positive effects. In rice and corn, the effect of fertilization on growth and yield is seen in two to three months, but for coconut, the effect in yield is noticeable only after 1.5 to 2.5 years. Added to this long waiting period is how many farmers maintain their coconuts as jungle crops. When these trees are fertilized, the surrounding weeds absorb the fertilizer faster than the coconut trees, rendering coconut fertilization practically ineffective.

The resistance to fertilization could have been easily broken by an adequate number o well-trained top caliber agronomists and extension specialists given the resources to conduct onfarm demonstrations, farmers’ training, and other extension services. Unfortunately, the number of well-trained agronomists and extension specialists assigned to coconut by the PCA and LGUs was inadequate. A majority of those who were assigned had limited knowledge of the biology of the coconut tree, particularly when it came to adequate weeding, fertilization, and other necessary techniques for promoting growth and increasing yield. The lack of this kind of knowledge in many technicians met by the author only served to “confirm” the wrong beliefs of the farmers when it came to coconut and its cultivation practices.

In Part III: Cases that show there is great hope for the Philippine coconut industry.