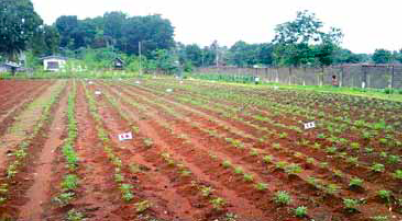 Under the system, marginal farmers in Zamboanga del Sur organically plant cassava in a one-hectare lot which is divided into 10 plots.

The AATSEA, an organization of scientists in Southeast Asia, bestowed the “Excellence in Agricultural Leadership Award 2015 for Policy Making and Governance” to Cerilles during the 4th International Conference on Integration of Science and Technology for Sustainable Development, which was held late last year in Hanoi, Vietnam.

During a recent interview with Cerilles in Pagadian City, Cerilles told Agriculture Magazine that he conceptualized the cassava (Manihot esculenta) production program back in 2001 during a brief rest from politics.

He narrated that at the start, his concept was just like the other conventional cassava production program which had already been adopted and implemented in many areas. But upon returning topolitics and assuming the top post in Zamboanga del Sur, Cerilles tapped the resources of the provincial government to promote the organic way of cultivating cassava.

Since then, he said the Gahung-Gahung Organic Cassava Farming System has been proven to be very practical and beneficial to the marginal farmers in the province. According to Cerilles, the innovative cassava program provided them with sufficient income because they were able to harvest the rootcrop even during times of drought or the dry season in the province.

Under GO-CFS,Cerilles mobilizes thousands of small farmers to organically plant cassava in a one-hectare lot which is divided into 10 plots.Other farmers in the province also adopted the gahung-gahung or pit method system, which was combined with organic farming technologies.

According to Cerilles, the system is very simple—just cultivate the cassava planting material in a pit which is about a square foot in area then fill it with organic fertilizers.

But in 2013, Cerilles said he re-engineered the province’s cassava program by creating an innovative microfinance economic enterprise to complement organic cassava production.

“Our organic cassava program has matured to a level that is worth replicating in other provinces and countries,” Cerilles explained.

Under the system, marginal farmers in Zamboanga del Sur organically plant cassava in a one-hectare lot which is divided into 10 plots.

The IFOAM or Organics International, which is based in Bonn, Germany, is the worldwide umbrella organization for the organic agriculture movement, representing close to 800 affiliates in about 120 countries.

According to Arbenz, the Participatory Guarantee System (PGS) approach which was used by Zamboanga del Sur to organize farmer groups is now applied around the world as a measure to facilitate trust building between producers and consumers, and for the development of deprived producer families.

He emphasized that organic agriculture is defined as a production system that sustains the health of soils, ecosystems, and people, and relies on ecological processes, biodiversity, and cycles adapted to local conditions, rather than with the use of inputs with adverse effects.

Organic agriculture combines tradition, innovation, and science to benefit the shared environment and promote fair relationships and a good quality of life for all involved. Thus organic agriculture is based on the principles of health, ecology, fairness, and care, Arbenz said.

He also explained that organic agriculture is widely recognized as being one of the most sustainable farming systems, providing high benefits to producers, society, and the ecosystem.

In recent years, the benefits from organic agriculture for smallholder farmers and for soil conservation, vitality, and fertility have been recognized while addressing major global challenges such as loss of biodiversity, climate change, natural resource depletion, poverty alleviation, and healthy nutrition.

The application and promotion of organic agriculture is a major contribution to mitigation and adaptation, Arbenzpointed out. Arbenz assuredthat the global organic community will take note of this outstanding example of good governance, one which can be copied and adapted to local conditions in other regions of the world.

Cerilles was also instrumental in making Zamboanga del Sur a founding member of the Association of Asian Local Governments for Organic Agriculture or ALGOA, and a member of the IFOAM.

For more information, visit the http://www.aatsea.org/.