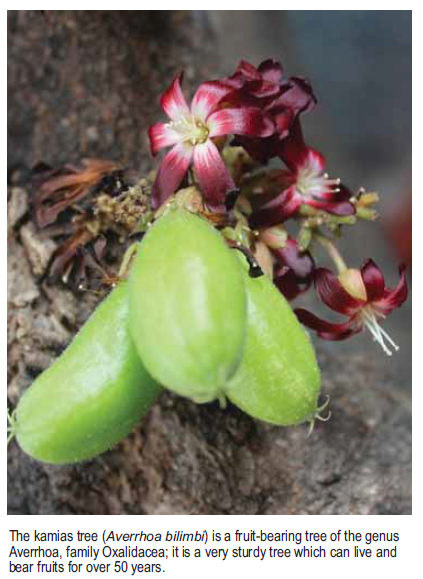 THE KAMIAS TREE (Averrhoa bilimbi) is a fruit-bearing tree of the genus Averrhoa, family Oxalidaceae, and is so sturdy,it lives for many years, particularly when well cared for.

One such example is in Quezon City; it is more than 50 years old but continues to bear fruit.The tree belongs to Ruben P. Cobangbang, and he describes it as already being a part of his family.

According to Cobangbang, or “Benru” as he is fondly called, even before he married his wife, the late Julita Villena, the kamias tree was already prolific in their front yard. After they had four children, all grown up now, their kamias tree remains as reliable, durable, and useful as it ever was.

Over the years, this tree always draws my attention when I visit Cobangbang. There is a roofed garage in Cobangbang’s yard which encompasses the tree, yet it continues to grow and has even branched out onto the outer part of the garage, as if seeking sunlight to remain prolific. It continues to bear fruit to this day.

A STURDY TREE WITH GOOD FRUIT

The mature kamias tree can reach between 5 to 10 meters in height; its trunk is fairly short and can quickly divide into several branches.The trunk and branches have to be exposed to sunlight for fruits to form. This can be encouraged by removing the leaves except from the branch end.

Averrhoa bilimbi probably originated in Indonesia, though the species is now cultivated and found throughout the Philippines and Indonesia, Sri Lanka, Bangladesh, the Maldives, Myanmar, and Malaysia. Essentially a tropical tree, kamias is less resistant to cold, and grows best in rich and well-drained soil.

The kamias tree usually begins to flower in February then blooms and bear fruits more or less continuously until December. The fruits are usually picked by hand; these need gentle handling because of their thin skin.

No pests or plant diseases have been reported specifically for the kamias tree.

Here in the Philippines, where it is commonly found in backyards, the fruits are eaten either  raw or dipped in salt or bagoong (fish paste).It can be used as a souring agent for sinigang, a popular Filipino dish, to cook the native “pinangat,” or eaten as an appetizer when sliced and dipped into bagoong or patis.The juice of the kamias fruit make a refreshing beverage with ice and sugar or honey added to taste.

There is one interesting variety of the kamias tree which is now available in the Philippines: the sweet kamias. It is being propagated and available at the Sarian Farm in Teresa, Rizal. It is also very prolific, and the fruit is very nice to eat.

MEDICINAL AND OTHER USES

When ground into a paste, the leaves can be applied to soothe itches, swelling, rheumatism, mumps, or skin eruptions.

Others claimed that a leaf blend is used as an after-birth tonic, while the flower infusion is used for thrush, cold, and cough.

In other countries, a syrup made from kamias fruit is used to treat inflammatory conditions.

However, there is as of yet no scientific evidence to confirm the effectiveness of such uses.

In Muslim areas, the acidic juice of the kamias is often used to clean kris blades. The juice can also be used as an alternative stain remover.

It is said that in Indonesia, the red flowers of the kamias tree are sought after as an ingredient for the natural red dye used for traditional textiles.

Whenever you may see a kamias tree, remember that it is very useful, prolific, and sturdy—and may even outlive us.