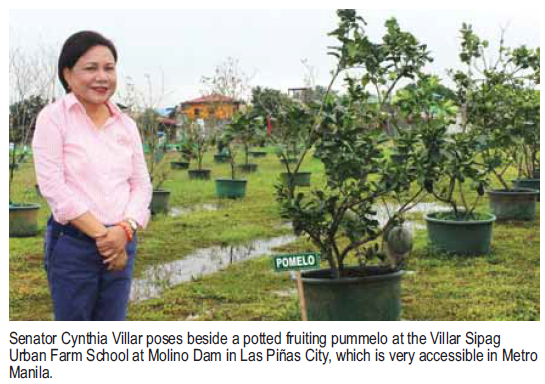 There is a need to include farm tourism destinations in school field trips and packaged travel itineraries to promote careers in agriculture, says Senator Cynthia Villar.

“Instead of taking our schoolchildren to accident prone areas, school authorities should consider [itineraries comprised] of [the] farm tourism spots and agricultural wonders sprouting all over the country,”she said, adding that this would make such trips more worthwhile among the youth and other concerned sectors.

“The Philippines as an agricultural country is blessed with abundant natural resources, biological diversity, and cultural heritage,” she noted. “We have what it takes to take a strong lead in farm tourism in the region, and even globally.”

The senator suggested the publication of a book showcasing the farm tourism destinations by province, along with information materials for farmers to teach them about the benefits of farm tourism.

Citing the Costales Nature Farms in Majayjay, Laguna as an example, Senator Villar pointed out that it offers educational and fun activities for students such as vegetable picking and planting, caring for farm animals, and an orientation on healthy eating habits.

Sen. Villar added that in Nueva Ecija, the Philippine Carabao Center or PCC, located in the Science City of Muñoz, is one of the best farm tourism destinations, with its training center, hotel, shops, and museum.

As the chairperson of the Committee on Agriculture and Food and principal sponsor of Senate Bill 3002 or “An Act providing for the development and promotion of farm tourism in the Philippines,”Sen. Villar also welcomed the passage of the bill on its third reading at the Senate and at the House of Representatives.

Among the salient features of the bill is the formulation of a Farm Tourism Strategic Action Plan consistent with the National Tourism Development Plan. She said this will provide the specific programs and activities that need to be done by government agencies and industry stakeholders.

Under the bill, the Farm Tourism Development Board composed of private sector/ industry stakeholders will also be created.

The incentives and tax exemptions identified in the original bills were removed since such incentives are already mandated under different laws.

“Farm tourism will be a major contributor in bringing back the glory days of agriculture in our country, given [its] potential to increase the income of people involved in agriculture as well as to help solve the problem of urban migration,”Sen. Villar said.

This appeared as “Villar: Field Trips Should Include Farm Tourism Destinations” in Agricultural Monthly’s March 2016 issue.