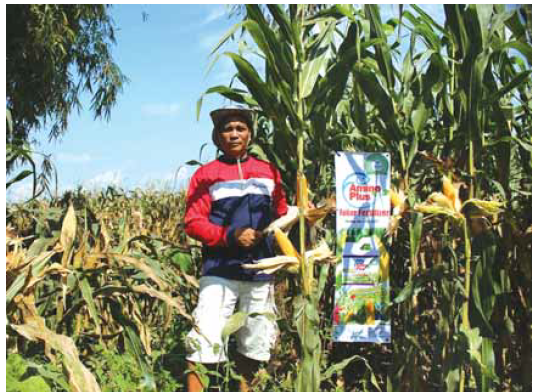 Several provinces in the northern part of the country were severely affected by either drought—brought about by the El Niño phenomenon— or flooding due to recent weather disturbances.

Several provinces in the northern part of the country were severely affected by either drought—brought about by the El Niño phenomenon—or flooding due to   recent weather disturbances.

These factors have greatly affected the rice and corn farmers in the provinces of Nueva Vizcaya, Isabela, and Kalinga in particular. Joel A. Cabanayan was one of these farmers; his corn plantation was among those affected by a prolonged period of drought that hit many parts of Region 2 late in 2015.

But this native of Bergoña, Bintawan Sur, Villa Verde, Nueva Vizcaya is a multi-awarded farmer; among his achievements are the Outstanding Corn Farmer of the Philippines award from Gawad Saka in 2015 after he harvested approximately 13 tons of corn per hectare from his fields. His other citations include a trophy for being one of the awardees in the Search for Agricultural Achievers for Region 2 for 2015; a Plaque of Recognition for his commitment to and compliance with the Code of Good Agricultural Practices (GAP); and a Presidential Citation for being an Outstanding Corn Farmer for 2014-2015 in Region 2.

Because he needed to address the problems presented by the drought, he opted to use Amino Plus Foliar Fertilizer to save his corn crop.

Cabanayan says, “Without the timely application of Amino Plus Foliar Fertilizer, I would have suffered  great losses.”

During a recent visit to his farm, the proof of his claim was easily seen; the corn fields belonging to other farmers which surrounded his corn plantation had almost dried up due to lack of rain.

As a result, his cousin Rosanna Duclayan started using Amino Plus on her corn plantation, which is adjacent to Cabanayan’s farm after noticing its  beneficial effects. Duclayan says it saved her corn plantation from the harsh effects of the El Niño phenomenon in their area.

Cabanayan’s wife Elizabeth also started using the product on her ornamental plants, which she claims have become healthier and have produced more colourful flowers.

Amino Plus is an organic fertilizer which has been reported on previously in Agriculture  Magazine; it has been seen to boost the growth and productivity of rice, corn, vegetables, fruit trees, ornamentals, and many other crops. Plants sprayed with Amino Plus are more resistant to diseases and other stresses in the field—including extreme drought or flooding. When sprayed on crops, it effectively adheres to the plant’s surface and provides quick nutrient supplementation.

It also contains effective microorganisms which give long-term beneficial effects on the physical, chemical, and biological condition of the soil.

It’s made of fermented trimmings and fish scraps, particularly those of mackerel-type fish. But unlike other fertilizers derived from fish and other natural sources, Amino Plus Foliar Fertilizer is not processed at high temperatures, preventing the denaturation of proteins while retaining the essential amino acids, enzymes, vitamins, and natural oil.Cabanayan expects a more productive corn harvest this year. With the proper farm technologies and Amino Plus, he is optimistic that he can equal, if not surpass, his previous record of harvesting 13 tons of corn from each hectare during this year.

Amino Plus is manufactured in Mandaue City in Cebu by Global Green Organic Fertilizer, Inc. The product has been registered with the Fertilizer and Pesticide Authority, and is also certified by the Organic Certification Center of the Philippines.