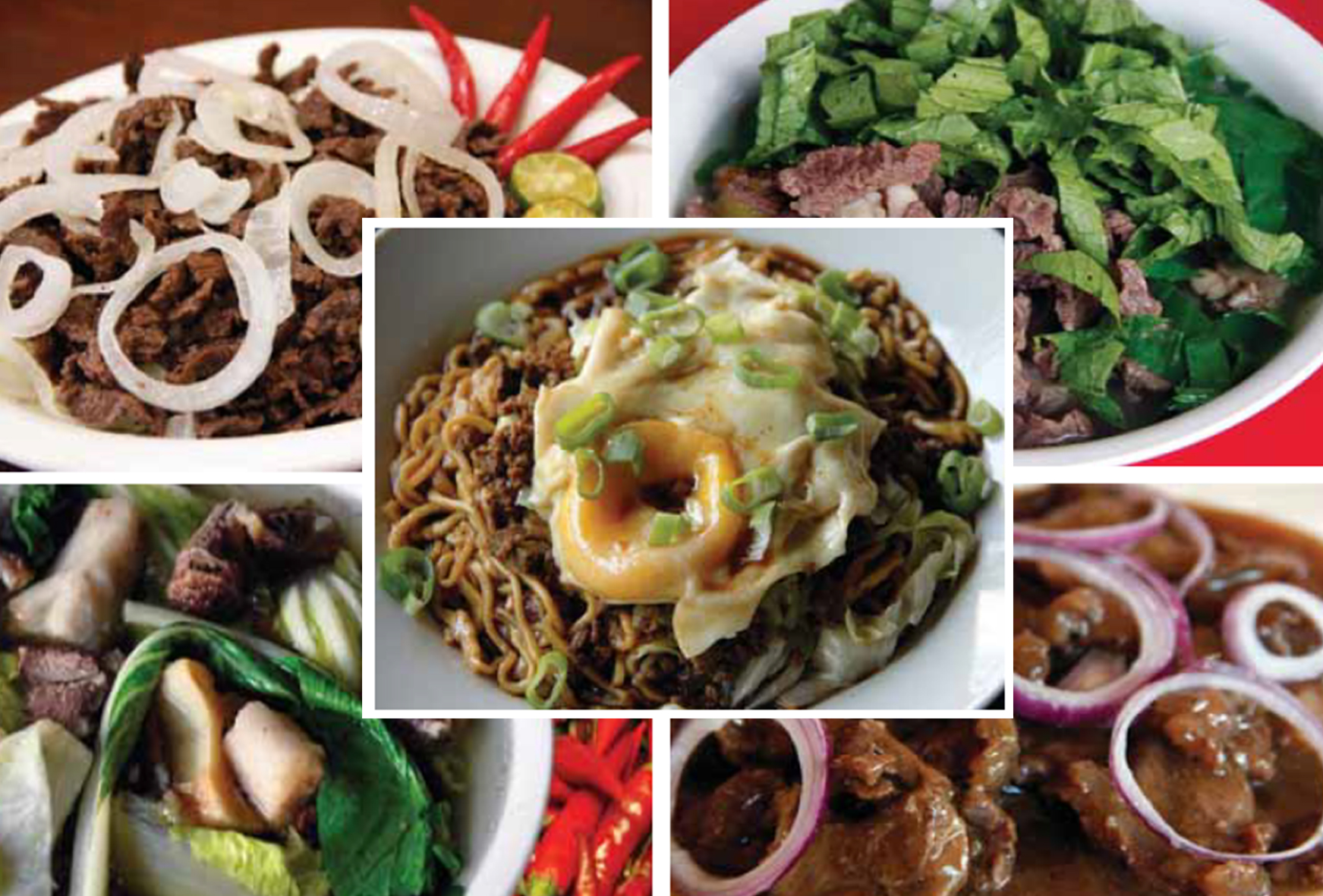 With more Filipinos discovering carabeef dishes, the demand for the meat of the water buffalo is increasing in local markets and many Filipino restaurants.

Its appeal increases when people note that recent studies have shown that buffaloes are a better source of quality meat than cattle due to their meat’s high palatability, physiochemical, and nutritional characteristics. It contains 40% less cholesterol and 55% less calories than beef, while having 11% more protein and 10% more minerals.

It has taken a long while for carabeef to become a top-of-mind meat for restaurateurs and home cooks alike. But carabeef dishes have long been popular across the country. Here is a brief overview of popular Filipino dishes made from carabeef and where one can find them:

Pigar-Pigar:  This dish is so popular in Dagupan City that it has its own festival. Originally created as part of the annual celebration of Bangus Festival, pigar-pigar is Dagupan City’s version of stir-fried beef, made of thin slices of carabao-seasoned with salt and pepper, deep-fried, mixed with cooked cabbage, and served with fried onion slices (and occasionally, liver).

The term “pigar-pigar” is Pangalatok (the native Pangasinan dialect) for “turning over” and this refers to constant turning over of the meat stripsas these are being sautéed in oil.

In Galvan Street, near the public market, entrepreneurs set up makeshift tents, tables, and chairs at night to serve pigarpigar. The street was the birthplace of Great Taste Pigar-Pigar Restaurant, which was hailed on a television networkas one of the top ten restaurants in Pangasinan. Now located on Gomez Street, it offers fine dining at a reasonable price, says owner Rommel Cerezo, adding that pigar-pigar orders are good for sharing.

On regular days, the restaurant uses about 10 kilograms (kg) of carabao meat and up to 100 kilograms (kg) during special occasions such as holidays and the celebration of the Bangus Festival. “We usually use the brisket, quarter, or rear flank since these are the leaner meats of the water buffalo, with less [fat],” says Cerezo.

At the restaurant, the meat is cleaned by removing the fat and ligaments then thinly sliced. Cooking pigar-pigar takes 15 minutes of deep-frying over moderate heat, during which constant stirring is needed. The cabbage and onion slices are added before the meat is removed from the heat. The dish is then served with soy sauce, vinegar, calamansi, and chili dips.

Cerezo plans to develop more carabeef dishes to add to his restaurant’s expanding menu. Currently he maintains three branches: at Gomez Street and Tambac, both in Dagupan City, and San Carlos City.

Batil Patong:  Tuguegarao is the capital of the province of Cagayan, and a highlight of any trip there is a meal that includes pancit batil patong (also known as “pansit batil patung”). “Batil”  means “beat the egg” and “patong” means “to place [something] on top.”

This locally produced noodle dish is made of pancit miki Tuguegarao, topped with fried minced carabao meat, bean sprouts, and other vegetables, fried egg, and chicharon.

It comes with an egg soup that can be poured onto the noodles or consumed separately. Soy sauce, chopped red onions, calamansi, and chili may be added according to the diner’s taste.

Many of the city’s restaurants offer their own version of pancit batil patong, with different recipes and ingredients used. But diners can generally expect the noodles to have been cooked in boiling water with soy sauce, seasoned with sugar and spices, mixed with a generous amount of carabeef, vegetables and topped with a sunny-side-up fried egg and chicharon. One serving of pancit batil patong is good for two and ranges from Php60-R 70.

“Pancit batil patong is not like other pancit… Its unique taste comes from the flavor that the carabeef adds to the noodles. It has become [staple food for] Tuguegaraoeños and Ybanags,” says city information officer Imogen Claire Callangan, adding that the Pancit Festival is held yearly during the weeklong celebration of the Pav-vurulun (Ybanag for a get-together or a sense of belonging) Festival, and that cooking and eating contests are part of the festivities.

Carabeef Tapa and Carabeef Longganisa:  Some of the most popular pasalubongs (homecoming presents) bought by tourists in Cagayan Valley come all the way from Tuguegarao, and include carabeef tapa (dried or cured beef) and the sweet and spicy carabeef longganisa (sausage).

These breakfast favorites are produced under the brand name “Carne Ybanag” by the Lighthouse Cooperative, and general manager Arthur Tabbu explains that the idea to produce their own version of tapa and longganisa came about when they were deciding on what products to offer to stand out from the rest of what was already being sold. The brand launched in 2004, and was named after the first inhabitants of Tuguegarao, the Ybanag people.

“At first, the marketing of our longganisa was successful. But when we introduced our carabeef tapa, consumers began to divert their attention to [it],” Tabbu says. They process a thousand kg of carabeef every month. A kilo of raw meat produces 1.4 kilos of  tapa. The meat is sourced from licensed butchers and delivered to their processing plant thrice a week. Their cooperative prefers to use choice parts (such as the rump) for leaner meat.

During processing, ligaments are removed from the meat. It is cut into balls and frozen for 24 hours for easy cutting. Slicing is done across the grain of the meat. The meats are then marinated overnight. The marinated meat is packed and retailed at Php 125 per 500 grams.

Carabeef Tapa is now recognized as one of the “One Town, One Product” (OTOP) offerings of Tuguegarao City under the Department of Trade and Industry (DTI) listings.

According to Tabbu, excess meat from processing tapa is used for making longganisa. The ground meat is seasoned with the same mixture and put in hog casings. Sixty kg of meat are used for processing longganisa, and for every 10 kg of carabeef, one kg of pork is added.

Each 500-gram package contains 12 pieces of longganisa. Chili and pepper can be added for stronger flavor.

The cooperative assures its clients of the quality of its products as its staff and workers have been trained on Good Manufacturing Practice (GMP) and Hazard Analysis Critical Control Point (HACCP). They are certified by the DTI and the Food and Drug Administration (FDA).

The coop’s tapa and longganisa are sold in the Lighthouse products outlet in Tuguegarao City. They are also regularly supplied to local grocery stores, bus terminals in Cagayan and Baguio City, other outlets in Regions 1 and 3, and some restaurants in Manila.

Minanok Soup:  Infanta, Quezon, which is referred to as the great gateway to the Pacific, is one of the farthest parts of the Quezon province. But some say the trip is worth it just to taste its Minanok, Nilagang Kalabaw, and carabeef steak.

Carabeef dishesare usually made from recipes passed on through generations, and a place called Kainan ni Diggy is considered the place to visit in the area for authentic Quezon cuisine.

Located next to the city’s public market, the small eatery serves local dishes 24 hours a day and is very popular among travelers and the locals.

Established in 2004, its main attraction is its carabeef dishes, including their version of Tapsilog: tapang kalabaw, sinangag (garlic fried rice), at itlog (egg). They also serve Minanok, a soup cooked like the traditional Tinola chicken soup with the use of carabeef in the place of chicken meat.

Owner Lucita Andaluz explains that preparing Minanok begins with boiling the carabao meat, which is then seasoned with salt and pepper. While waiting for the meat to be tender, the ginger and garlic are sautéed until golden brown. “The boiled meat is then added and sautéed until its color changes. The extract of the carabeef is used as broth. Water is added and the broth [is] allowed to boil then vegetables are added and [the dish is] allowed to boil again. We usually use mustard greens. One may add salt, pepper, or fish sauce for seasoning.”

Another local favorite they offer is Nilagang Kalabaw, with carabao meat substituted for beef in the clear stew. Andaluz says they use 40 kg of meat is used for their Nilagang Kalabaw and Minanok dishes, while another 40 kg is used to make Tapang Kalabaw and other carabeef specialties. An order of a carabeef dish ranges from Php 60-Php 80.

Asked why carabeef is very popular in their area, Andaluz says that the locals’ preference for carabao meat over beef is because the former is cheaper.

Locals tell visitors that a good place to try all these is the A&M JV Snack Parlor in Eastern Cavinitan, Virac. Owned and managed by Asuncion Jose, the small eatery has been serving carabeef specialties for 35 years. “Our bestsellers are the Carabeef Steak and Paksiw na Kalabaw. [Carabao] meat [is] an all-time favorite and specialty of Catandunganons. Though carabeef is a bit [more] costly than pork, they still prefer to cook and eat it for health reasons,” she says. A serving of Carabeef steak is Php 40 while Paksiw na Kalabaw is priced at Php 35 per serving.

Jose explains that on a daily basis, they use five kg of meat for cooking Carabeef Steak and an additional four kg for the Paksiw na Kalabaw dish. “Carabeef Steak is cooked the same way the traditional Beefsteak or Bistik Tagalog is prepared.

[The] meat is thinly sliced and marinated with soy sauce, calamansi juice, and other seasonings. The meat is stir-fried until [it browns]. Garlic is then added and sautéed for a few minutes. The marinade will be added and allowed to boil. The fried meat is simmered for 20 minutes or until it is tender. Water is added as needed. Before serving, fried slices of onions are added.”

Pakdol:  Tacloban City is a primary tourism destination in the Eastern Visayas region and the main gateway to Leyte and Samar islands; as such, it is home to many restaurants serving a variety of dishes. Filipino comfort food and local specialties is what “Dahil Sa Iyo” is known for. Located along the highway of Real St. and corner P. Burgos St., the restaurant is open 24 hours.

Owned by husband and wife team Roman and Anacorita Reyes, the restaurant, named for a popular song, opened its doors to the public in 1976. One of their bestsellers is Pakdol. In the local language, Waray, “Pakdol” refers to buffalo meat stew, similar to Bulalo soup but with carabeef as its main ingredient.

Pakdol soup features shank meat with bone marrow still inside the bone and vegetables. Locals consider it a perfect dish for rainy days and the cold season. To tenderize it, the meat is simmered for four hours on a low flame that uses charcoal as its fuel. A serving good for up to 3 persons costs Php250.

Carabeef for All: A Closer Look at Carabao Slaughtering Procedures