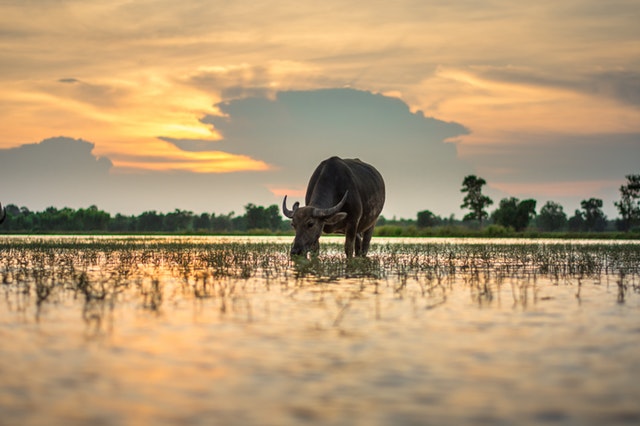 There’s no dooubt that ‘carabeef’ or carabao meat, has become popular with the public because it is healthy and delicious. Studies show that carabeef is 10% lower in fat, 40% lower in cholesterol, 55% lower in calories, 11% higher in protein, and 10% higher in minerals as compared to traditional beef from cattle.

The taste is comparable to cattle meat, the studies add, and carabeef is cheaper on the market; thus, more restaurants across the country use it. There are also various ways to prepare carabeef dishes.

It is always good to know what takes place in slaughterhouses. What is the correct slaughtering procedure for carabao, given the increase (209,307 head of carabao slaughtered in 2013 and 217,342 in 2014, representing an increase of 4%, according to the website of the Philippine Statistics Authority or PSA) in the number of slaughtered carabao?

According to the Food and Agriculture Organization (FAO), the following are the step-bystep procedures in the conduct of slaughtering the carabao:

1. Stunning of the animals using either of the three ways: (1) percussion or captive bolt pistol stunning; (2) electrical stunning; and (3) gas stunning;

2. Bleeding of the animals after they have been stunned;

4. Hoisting the meet on the line rail;

6. Splitting the meat; and

7. Hanging the meat quarter on the rail.

Under the auspices of the FAO, the National Meat Inspection Service (NMIS) requires that the animals be slaughtered in a hygienic way. The NMIS, an agency under the Department of Agriculture (DA), implements the guidelines and policies on the proper handling, and inspection, processing, storage, and preservation of meat and meat byproducts.

It conducts accreditation of slaughterhouses, which are classified as follows:

“AAA” or abattoirs that are qualified to export produced meat; “AA” which are establishments qualified for domestic trade; and “A” which can only trade its products within its particular municipality or city.

It was noted in a study by Maranan, et al though that most of the slaughterhouses in  the Philippines lack the updated equipment and facilities necessary in the performance of an optimum and hygienic slaughter process. Despite this, the slaughtering of the animal continues because of the demand for  carabeef.

Variations in Slaugtering Procedures of Some Slaughterhouses

1. Prior to the slaughtering of the animal, meat dealers are required to submit the following: permit to slaughter; proof of ownership of the carabao; certificate of transfer; transport permit; and veterinary permit, among others.

2. An ante-mortem examination is conducted to determine if the animal is healthy and to check whether it is stressed or has discharges.

3. The carabaos are confined for 24 hours before slaughtering.

4. The animals are bathed before the actual slaughtering procedure.

The following were the major differences (and some noted activities) of the slaughterhouses in terms of slaughtering the carabao:

1. The slaughterhouses have different ways of stunning the carabao to render it unconscious. In some slaughterhouses, such as those in Mangaldan, Pangasinan; Lal-lo and Tuguegarao, Cagayan Valley; Infanta, Quezon; and Iloilo City, stunning is done with the use of a captive bolt pistol. But in Virac, Catanduanes and Abuyog, Leyte, stunning is still done the traditional way: with the use of an axe and knife. Authorities said the use of axe and knife are not recommended in the proper slaughter procedure.

2. The aforementioned slaughterhouses—save for the one in Lallo, Cagayan—do not hang the carabao meat before cutting it into pieces, as they do not have a line rail.

3. Most of the slaughterhouses skin the carabaos and cut meat parts on the floor, a practice that is not recommended in correct slaughtering procedures.

5. Some of the slaughterhouses slaughter carabaos twice a day while others do so only once daily. The time of slaughtering varies from 2:00 a.m., 3-7 a.m., 12 noon, and even at 7 in the evening.

6. The number of animals processed at slaughterhouses varies, as detailed below:

Location of No. of carabao slaughterhouse slaughtered daily

7. Meat dealers pay varying slaughter fees depending on the weight of the carabaos.

8. The number of slaughtered carabao increases when there are special occasions such as fiestas and other gatherings near where these slaughterhouses are situated.

However, inLal-lo, Cagayan, it was noted that the number of carabaos being slaughtered rises when the farmers need money for the education of their children (especially during pre-harvest time).