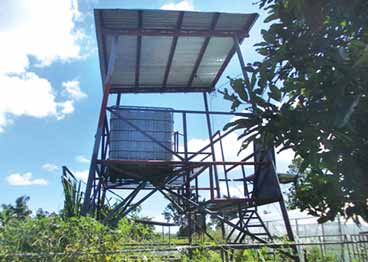 Mangarita Organic Farm is a diversified, integrated organic farm located in the communities of Barangay Mangga and Barangay Sta. Rita in Capas, Tarlac. It was formed at the initiative of Sibol ng Agham at Teknolohiya (SIBAT) Inc., a non-governmental and non-profit organization, to carry out its mandate of promoting sustainable agriculture in Philippine rural communities.

This farm serves as a community technology extension center, providing a venue for hands-on training to farmers and farm practitioners on organic farming. It also serves as a demonstration farm on crop and animal integration, highlighting economic sustainability as a result of diversification.

The farm’s organically raised vegetables are its main cash crop, making its operations sustainable. This is supplied primarily to SIBOL Eco Coffee Shops at two locations in Quezon City, Metro Manila. The stores cater mainly to its organic niche market and serve as the outlets for the farm and its organic farmer cooperators in Tarlac. Mangarita also regularly sells its produce at the Organic Food Tiangge every Friday at Paraiso, Capas, Tarlac in front of the Department of Agriculture Region 3 Building.

Mangarita has set aside a portion of its land space for a demonstration and production farm for organic rice. Here, farmers are introduced to organic rice production practices and encouragedto stop chemical-based production methods.

Another farm component is the production of farm inputs like biological sprays using indigenous microorganisms and other plant-based preparations for pest management and biofertilization.

Part of the farm’s diversification can be seen in the growing of ducks and fowl, native chickens, goats, and pigs employing organic methods. Farm wastes like vegetable trimmings and rejects are turned into feed for poultry and livestock, while animal wastes provide input for the compost and vermi bins. Aside from being a source of fish like tilapia, hito, and dalag, the fishpond is also integrated in the duckery for algal growth and fertilization.

Herbs and flowering plants are intercropped with the vegetables, and help repel harmful insects while attracting pollinators like bees and other beneficial insects.

Greenhouses are also being fabricated on the farm to improve organic vegetable production and protect the crops from extreme and sudden changes in weather conditions. Solar powered technologies are also being harnessed in the form of a solar powered water pump and fertigation, as well as solar perimeter lighting.