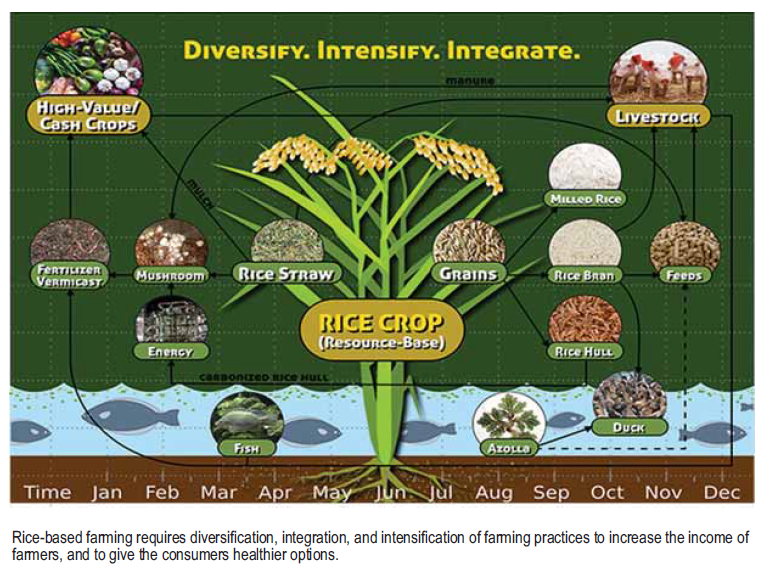 Rice-based farming is expected to increase the income of farmers while offering consumers healthier options.

“Instead of rice mono-cropping, farmers should also grow other crops and livestock alongside rice,” Rasco said. “With the use of existing models like [those for] vermiculture, mushroom production, mungbean, corn, garlic, duck, and fish, [which] can be grown and maintained alongside…rice, farmers will have reduced dependence on rice as [their] main source of income.”

Rasco highlighted the significance of “Palayamanayan,” a PhilRice advocacy that aims to transform a community of farmers into agri-preneurs. Its scope is not limited to crops and livestock but also covers fish and vermiculture as it is meant not only to achieve household food security but to contribute to national food security as well.

Under Palayamanayan, everything rice farmers have on their farms serves a purpose. Though rice is the main crop, vegetables and livestock are integrated to optimize the overall farm system and increase farmers’ income sources. Ducks and fish can also help with pest control and added income; azolla can also be planted as source of organic inputs. “Nothing is wasted in the closed loop method,” said Rasco, adding that with rice-based farming, consumers may also try other staple crops such as kamote, cassava, white corn, brown rice, and parboiled rice.

Featured in the August 2015 issue of Agriculture Magazine was the Integrated Agriculture
Aquaculture (IAA) farming practices, which could also help farmers get more out of their land while helping contribute to food security.

Under the integrated farming system, the WorldFish Center said farmers should set aside a small area of their land for fish farming. Such farms are more sustainable, productive, and
profitable than traditional farms that rely on slash-and-burn cropping, it added.

Integrated farming allows farmers to produce around 1,500 kilograms of fish per hectare each year, providing high-quality protein for their families and giving them another source of
income. WorldFish said the net income of those who integrate aquaculture into their farms exceeds that of non-adopters by about 60 percent. Their farms are also 18 percent more
productive during times of drought, increasing farm resilience and helping ensure food security for the farmers and their families.

According to the WorldFish, the techniques to be adapted are simple and low-cost. Fish are fed corn bran and household leftovers, while manure from goats, chickens, and other farm animals helps fertilize the ponds.

In addition to using water from the ponds to irrigate corn fields and vegetables in their gardens during the dry season, farmers can also cultivate cash crops like bananas around the banks of
their ponds.

Pond sediment can be great fertilizer, and WorldFish research has shown that replacing inorganic fertilizer with pond sediments in corn fields is effective in boosting productivity.
Farmers only need to apply pond sediments once a year to get good results.

WorldFish said that during times of drought, farmers can produce vegetables using the residual moisture at the bottom of the pond or use pond water for emergency irrigation of seedling nurseries.

During the years with normal rainfall,  integrated farming systems can produce fish and vegetables that are of higher nutrient quality and are more marketable.

Reviving Rice-Fish Farming in the Philippines