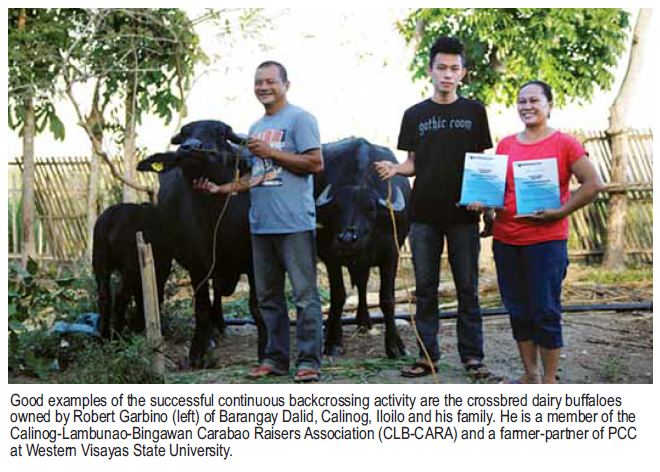 For centuries, the Philippine carabao, which is a swamp-type water buffalo,has been the ideal companion and helpmate of farmers in their day-to-day chores. Its draft power abilities, and its being tractable and friendly, have given it the status of being so indispensable, local farmers often said they were less effective and efficient without the creatures.

Times have changed, though. In the advent of farm mechanization, the carabao’s role has been diminished, and it isnow underutilized, especially since the numbers of the riverine or dairy type carabaos, its cousin, are increasing.

But all is not lost for the Philippine carabao.

The Philippine Carabao Center (PCC), upholding its mandate to conserve, propagate, and promote the carabao as a source of milk, meat, draft power, and hide to benefit rural farming families, is embarking on aprogram to improve the native carabao. It is now committed to establishing a gene pool for the Philippine carabao, and from this pool, the selection of its economically important traits will be done.These traits include growth, carcass quality, and reproductive abilities.

Foremost on the PCC’s list of things to do for this animalare: to improve its size, weight, and capabilities to yield more draft power, meat, milk, and other benefits that can be derived from it.

In the genetic improvement program (GIP) for the Philippine carabao, conservation efforts will underscore the maintenance of a viable herd and long term storage of germplasm in the form of frozen semen, and perhaps frozen embryos, and improving the animal’s growth rate, reproductive performance, and carcass traits via a breeding program that will emphasize selection for these traits.

“We are focusing on improving the meat production potential of the native or swamp buffaloes, increasing…its growth rate, and improving some of the specific muscle areas that are of high value,” said Dr. Ester B. Flores, PCC national GIP coordinator, adding that the breeding program is meant to increase the productivity of the Philippine carabaofor meat because it already has good structure and form for draft power. “If it will be sold for meat, then why not increase its dressing percentage?” she asked, emphasizing the importance of improving the productivity of the native carabao.

changes in the potential growth rate of the native carabao can be translated into more economic value with fewer efforts, and will only involve the use of swamp buffaloes with improved genetics. A faster growth rate, she said, would enable farmers to sell them to the market at a younger age with an average market weight of 400 kilograms (kg), and provide farmers with an additional source of income.

The document “Write-up on the Updates on Philippine Swamp Buffalo Gene Pool and Breeding Program” conducted by the team of Dr. Flores indicated that to date, there are 1,266 growth records available for analysis. In recent years, a general improvement in weight and ADG (average daily gain), especially among the younger calves was noted. This validates the selection of replacement bulls for breeding.

Tracking growth trends indicates linear growth in the calves up to 24 months of age. The ADG at 12months increased the most consistently, with a 153% increase in 2014 relative to 2004. This was followed by ADG at 18 months. This translates into slightly higher body weights at 12 and 18 months compared to 2004 prior to starting a breeding program.

The study also indicated that the Philippine carabao has the potential to increase its meat-type breed, with more formal genetic evaluation and selection program. Thus, genetic evaluation to estimate breeding values for growth rate, carcass, and maternal traits should be given more emphasis as well as genetic correlations among these traits.

“We should select bulls or breeders that are fast [growers] to improve the whole population. In the next round, you have to match up your breeder with a female swamp buffalo,then the calf will be used for breeding for the next generation. That is why the improvement is quite visible, from 240g of ADG to 400g. That is the [result of the] selection and breeding program,” Dr. Flores said.

She added, “If [a] farmer wants to get…semen, we have good quality semen for native carabaos with excellent conformation [and a] faster growth rate; [also, it] is definitely pure. You will see here the [efforts] of PCC to help [farmers increase their incomes should they choose to] sell their animals for meat. We are not developing a new breed…we are actually improving the potential of [the] Philippine carabao…”

Meanwhile, Dr. Flores believes that the program will not affect the population of swamp buffaloes, as farmers won’t sell all their animals but instead, will keep the females for reproduction purposes. “They [definitely won’t] sell their source of income. A good reason for the conservation of a species is for it to have… economic value. If it provides [many] benefits, it will be taken care of and [given assistance in reproducing],” she said.

Now that climate change is becoming an issue that might cause some animal species to disappear, PCC is exerting more efforts to identify sanctuaries and increase village-based gene pools for swamp buffaloes and to use cryopreservation of germplasm for future generations.

These village-based gene pools are in areas identified by the PCC to be where the native carabao population can be conserved and become carabao sanctuaries. Introduction of foreign breeds of buffaloes, such as the Murrah breed, will be avoided, and the PCC will coordinate with the concerned local government units (LGUs) in areas where these carabao sanctuaries are located.

“We have active conservation efforts and we are actually cryobanking[germplasm] so that [this will serve as] insurance [for] our mandate to conserve and propagate. We have two ways of doing it: [conservation through improving the animal’s] economic value, and…conservation by preserving, cryobanking, and maintaining the good genes,” Dr. Flores said.

Crossbreeding is another way to improve the breed in areas that are sources of dairy products. The desired endresult is the production of crossbredsfrom purebred Murrah bulls and female Philippine carabaos. Increasing the riverine blood in the crossbred buffalo population is intended to increase milk production. To achieve this, repeated backcrossing with different riverine bulls up to fourth generation is done. Continuous backcrossing will result in 93.75% riverine blood in the offspring, with higher milk production.

“We are developing our own Philippine dairy through backcrossing, because we only have a few purebreds imported from other countries [to] serve as [a] genetic resource. These are what we use in the selection for genetic improvement. [There will be continuous backcrossing of the native and riverine breeds, and should the native percentage in the offspring reach] 93%, that is almost pure and we can call it our own Philippine dairy buffalo breed,” Dr. Flores explained.

An example of this successful continuous backcrossing activity are the crossbred dairy buffaloes owned by Robert Garbino of Barangay Dalid on Calinog Iloilo. Garbino is a member of the Calinog-Lambunao-BingawanCarabao Raisers Association (CLB-CARA) and a farmer-partner of the PCC at the Western Visayas State University. One of the crossbreds, named “Julia” and with ID number 6WVC080163, has 75% riverine blood, and isthe product of successful artificial insemination (AI) by AnjoPalmes, a PCC trained village-based AI technician. The animal gave birth to a female calf with 87% riverine blood in 2014 with the use of the AI process; it was named “Krissy.”

“Julia” was recorded to average 5.7 liters of milk production per day at 181 days of lactation and calvings in February 2012, February 2013, and February 2014, with 12 month calving intervals. “Krissy,” on the other hand, recorded an average of eight liters of milk per day for 45 days and calved in January 21, 2015.

“We are very grateful that we have these crossbreds because of the income they [provide] us. I was [formerly] a construction worker… and earned [only] R350 for working the whole day, but now that I have my crossbreds, I earn thousands of pesos from milk sales in just a half day of work,” Garbino proudly stated.

These crossbreds are proof that, given the necessary attention and care, they can be on par with imported dairy breeds.