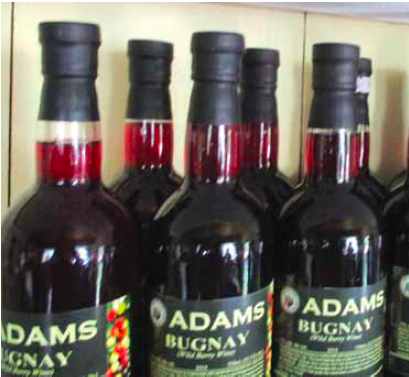 Telling a lie need not be a contemptible act all the time. Sometimes it can be rewarding. In the case of the tiny town of Adams in Ilocos Norte, for instance, a lie launched what we might call the town’s “bugnay wine revolution.”

Bugnay, by the way, is the Ilocano name of the berry-bearing tree that is widely known as “bignay” in other parts of the country. Its botanical name is Antidesma bunius.

Adams is about the smallest town of Ilocos Norte but it has become well known because of its bugnay wine. Would you believe that the town only has a population of 2,700? Yet not just one but 65 of its families have become commercial bugnay wine makers, forming their own association.

The “big lie” happened in 2007, when the provincial government staged a food fair in Laoag City. All the towns in the province had been told to exhibit their own products. Because Adams did not have anything special to showcase in their booth, they decided to buy bottled bugnay wine from a supplier in Baguio City.

The bugnay wine attracted a lot of visitors, who liked its taste. When the visitors asked where it was produced, the lady attendant said it was a product of Adams. Not only one visitor but many asked the same question, and the answer—always given with a straight face—was the same.

That gave Dr. Bielmajo Bawingan, the wife of the mayor, the idea that they might as well stand by their claim. Fortunately, many of the women in Adams are experts in making rice wine (tapuy ) so it was easy for them to shift to bugnay wine-making. Also, there were lots of wild bignay trees not only in Adams but also in neighboring towns in Pagudpud and Burgos in Ilocos Norte, and in Sanchez Mira and Alcala in Cagayan.

Dr. Bawingan said they bought a lot of berries from the other towns but at the same time they started planting their own trees in 2009. The good thing about bignay is that grafted and marcotted trees start bearing fruit in just one year from planting. The wine makers collected various cultivars from the different towns. One favorite of Dr. Bawingan is what she calls Saliksik from the town of Pagudpud.

Saliksik, she said, has a high brix of 22 percent. The higher the brix, the sweeter is the berry. This makes very good wine, according to Dr. Bawingan. Other varieties may have only 8 to 12 percent brix. Varieties with low brix readings can also be made into good wine but you have to add sugar during fermentation.

It did not take long for the government to take note of the wine making in Adams that generated jobs in the community. In 2009, the Department of Science and Technology (DOST) donated 2,000 grafted seedlings of the Palamuti variety from the Mariano Marcos State University in Batac City. This is a prolific variety that was originally a selection by the Institute of Plant Breeding in Los Baños.

Besides the wine makers, there are other people who are deriving income from bignay wine making in Adams. Rove Paul Agupan, the municipal assessor—who is himself a wine maker—said the beneficiaries include the gatherers of the berries from the forest as well as in plantations. Unsorted berries that may include leaves and small twigs are bought at Php15 to Php25 per kilo. Sorted berries, on the other hand, are bought at Php40 per kilo.

Women and even school children who sort the berries are paid Php10 per kilo. Others are employed during the racking. This is the process whereby the juice that is being fermented in plastic jars is transferred from one jar to another by siphoning. This is to get rid of the sediments. Usually, the juice being fermented into wine is transferred four to six times before it is ready for bottling and then marketing.

A panel of women tasters was formed to certify that the wine meets the standard in the market. The wine cannot be marketed unless it is approved by the panel of tasters. That’s necessary to maintain the quality of the product, according to Dr. Bawingan.

The bignay trees start to flower in March and harvesting runs through June to August. This span of time is the busiest month for the workers, who do not only extract but also do racking in the months beyond August. The 65 members of the association market their own product. Many of them sell them through stores in Laoag and other towns. Governor Imee Marcos is a favorite customer because she buys a lot of wine to give to visitors.

Normally a 750-ml bottle of bugnay wine sells for Php250. In the case of Dr. Bawingan, she has a special edition with cork that sells for a price three times that. Last year, she made 6,000 bottles priced at Php750. Other wine makers produce substantial volumes. Rove Paul Agupan, for instance, made 1,700 bottles last year. Others produce more or less similar quantities. The volume of production is expected to rise as more plantings by the wine makers themselves are being made.

(left to right) Dr. Bilemajo Bawingan
and her bignay wine. Elaine Mateo
shows a bottle of Bugnay wine from
Adams; bugnay is the Ilokano name for
“bignay.” Ernani Pedrona is a bugnay
and tapuy wine maker; here, she shows
a bottle of tapuy or rice wine.

Bugnay wine has made Adams famous and is a big factor in attracting visitors. Much of the road going to the town has been paved, making it easier for tourists to visit. Tourists, according to the Adams Tourism Council, have been coming in bigger numbers.

Of course, the people who are into wine making have become more entrepreneurial. They are also making rice wine. And Dr. Bawingan is into making passion fruit juice and other juices. She is experimenting on growing strawberries right now. Who knows, the money they derive from bugnay wine could be used to finance other livelihood opportunities