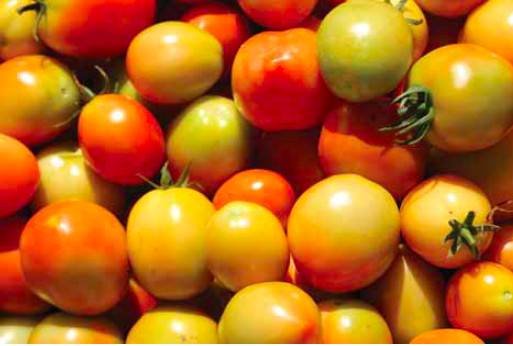 A typical tomato farmer at Sitio Orias in Barangay Kita-Kita, San Jose City, was able to almost double his yield after applying an organic amino foliar fertilizer to his crop.

From the usual yield of about 15 crates of tomatoes from his 1,200-square meter farmland, 41-year-old Romeo Castro now harvests at least 22 crates after using Amino Plus Foliar Fertilizer.

Aside from the increase in yield, Romeo said his tomatoes became shiner and more plump—among the qualities sought after by buyers and/or traders.

When asked how he came to know about the fertilizer, he said it was introduced to him by Manny Pablo, a field technician from the Global Green Organic Fertilizer Inc., the makers of the Amino Plus Foliar Fertilizer.

Pablo also provided the technical support to Romeo, which resulted in the increase in yield and improvement in the quality of the crops.

His brother, 56-year-old Ernesto Castro, has also started using the fertilizer on his onion farm after taking note of the improvement in Romeo’s crops. According to Ernesto, the leaves of his onions became bluish-green after using Amino Plus Foliar Fertilizer, saying that this is the quality of plant he has longed for over the past years. The amino acids of the fertilizer caused the improvement in the plants, making the leaves to become bluish green in color.

Romeo Castro also cultivates onion on another 4,000 square meters of farmland which is just beside his tomato plantation. Previously, the weight per crate of his tomato harvest averages 22 kilos, but now the average weight of each crate weighs about 24 kilos after using the amino foliar fertilizer.

Pablo explained that Amino Plus Foliar Fertilizer is a new organic fertilizer which is now available in the market. It can boost the growth and productivity of rice, corn, vegetables, fruit trees, ornamentals, and many other crops like tomato and onion.

Plants sprayed with the fertilizer are more resistant to diseases and other stresses in the field like extreme drought or flooding. When sprayed on crops, it effectively adheres to the plant’s surface and provides quick supplementation.

Unlike other fertilizers which are derived from fish and other natural sources, Amino Plus Foliar Fertilizer is not processed at high temperatures, preventing denaturation of proteins while retaining amino acids, enzymes, vitamins, and natural oil, Pablo said. The trimmings and fish scraps, particularly of the mackerel types, are fermented to produce the organic foliar fertilizer. It also contains effective microorganisms which have long-term beneficial effects on the physical, chemical, and biological condition of the soil.

These are the reasons why the tomato and onion crops of the Castro brothers improved. With his decision to try the Amino Plus Foliar Fertilizer on his tomato plantation, Romeo Castro is expecting a more productive tomato harvest this year compared to the previous years.

With the proper farm technologies— the equipment for which the Castro brothers were able to acquire—plus the benefits of using the Amino Plus Foliar Fertilizer, they are optimistic that they will be able to surpass their respective previous harvests.

Aside from the Castro brothers, the other farmers who are also cultivating tomatoes and onions in the nearby farmlands have started using the fertilizer after taking notice of the improvement in the two brothers’ crops.

Amino Plus is manufactured in Mandaue City in Cebu by Global Green Organic Fertilizer, Inc. The product has been registered with the Fertilizer and Pesticide Authority, and is also certified by the Organic Certification Center of the Philippines.