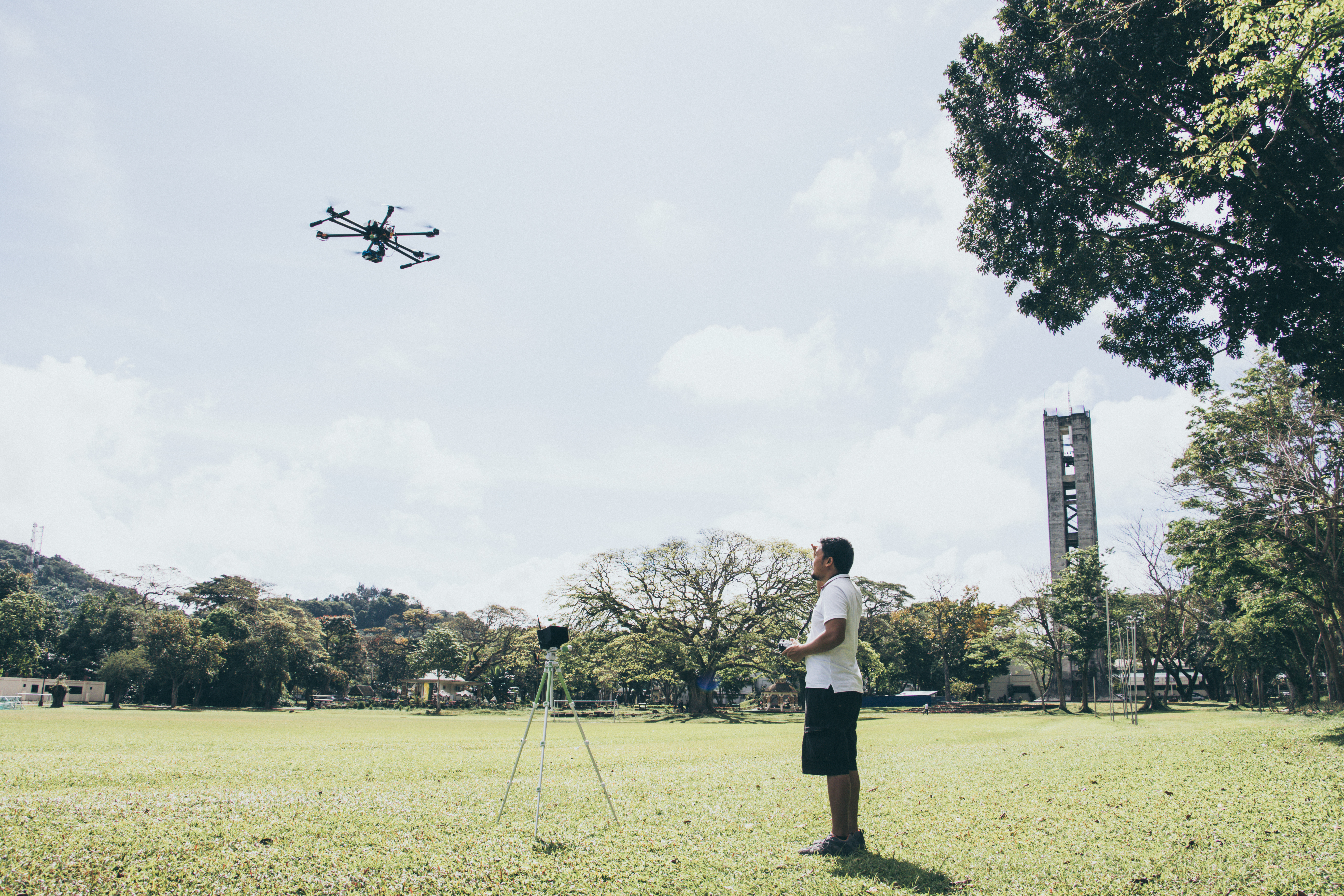 Drones, unmanned vehicles that roam the skies, can record breathtaking sceneries from whole new vantage points. They have taken over media production, from the news to the big screen with their high-quality imagery, attracting a lot of enthusiasts from everywhere.

A group of professors from the University of the Philippines Los Baños (UPLB) shares the same fascination for these flying machines, but not for the same reasons.

Since 2016, Prof. Danilo Mercado and his colleagues at the UPLB Institute of Computer Science (ICS) and Institute of Mathematical Sciences and Physics (IMSP), have been teaching robotics to students to aid agriculture and the environment.

“Since drones are capable of processing digital images, we have been exploring their potential to determine agricultural crops’ nutritional deficiencies, stress, lack of water, and many other problems faced by our local farmers,” says Prof. Mercado.

“If we can point these out as early as possible, we also have a better chance to come up with remedies. This is something that would greatly lessen the losses of our farmers,” he adds.

The UPLB professors have also been trying to develop the drone’s application to determine whether the right crops are planted in areas based on crop suitability maps, to monitor farm productivity, and characterize plant nutrition. They have already submitted a proposal to the Department of Agriculture to start an Agricultural Drone Academy to further develop applications of drone technologies for farming and to train potential users.

From the skies, the team also dove into building watercrafts that take water samples to keep track of lake temperatures, pH and oxygen level, and other important data.

Mercado gives it emphasis as he explains that it will soon be an essential tool in the early detection of fish kill. “It serves as a water quality sensor and an early warning device for fisherfolks.” Together with other UPLB professors and students, he plans to test the boat in Taal Lake, which has recorded numerous fish kill incidents resulting in millions of pesos in losses.

In the long run, the team would also like to develop an image processing system that can be remotely operated underwater. This would assess coral reefs and determine the classification and quantity of each.

“Robotics is a collective and multi-disciplinary effort, it is at its best when it is done through a collaboration of different experts,” Mercado said.

Dr. Nelio Altoveros, a professor at IMSP, spearheads the initiative to establish the UPLB Robotics and Instrumentation Study Center that aims to conduct researches on robotics application for agriculture and to train professionals and students from all over the country.

The center, once functional, would propose studies on technologies such as farm drone application, automation of irrigation, and GPS-guided machines like driverless tractors.

Other than this initiative, UPLB has been active on other ongoing projects related to the agricultural and environmental application of robotics.

UPLB, through Project Smarter Approaches to Reinvigorate Agriculture as an Industry in the Philippines (SARAI), has developed a multi-spectral drone system. They use free satellite images from NASA and the European Union to monitor farming areas to determine crop status and crop health. It also estimates actual damage after typhoons and other natural disasters.

Meanwhile, the Phil-LiDAR 1 project produced high resolution maps that show the extent of flooding across major rivers in the country. This is done using aircrafts equipped with Light Detection and Ranging (LiDAR) which scans and reflects the Earth’s surface and its features to a sensor.

“Our dream is to be able to tap these existing applications from the university and also to come up with new concepts. Once we package all these technologies, we might even be able to convince more young people to venture into farming and environment protection,” a hopeful Mercado shares.

Right now, these robotics experts from UPLB are focused on building mature technologies for the future—the robots of tomorrow to secure food production and preserve our natural resources. In the end, there is still a lot of work to be done but a vision has been set. The sky’s the limit.

John Glen Sarol is a graphic designer, writer, and videographer at the Office of Public Relations – University of the Philippines Los Baños. He is an agriculture journalism awardee who writes about farmer success stories and innovative farming technologies in the country. He is also fond of producing amateur short films.

Women Achievers: From Php5,000 in Capital to Php9 Million in Assets