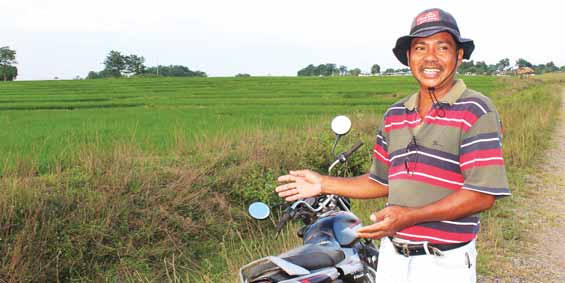 As the drought caused by the El Niño phenomenon continued devastating agricultural crops in the province of Isabela, a farmer i0n a barangay in Reina Mercedes town decided to spray his newly planted palay with foliar fertilizer in anticipation of the long dry spell.

Farmer Dionisio Tamayao of Barangay Dangan in Reina Mercedes said he was already content with the way his palay crop progressed several days after using Amino Plus Foliar Fertilizer, despite the drought afflicting his province. Dangan is the biggest barangay in Reina Mercedes, and most of its area is devoted to agriculture.

Part of the palay plantation of Tamayao which survived submersion in floodwaters.

An Unexpected but Welcome Outcome

But while El Niño is taking its toll on Region2, particularly in Isabela, the sudden change in weather patterns which was brought about by typhoon “Nona” last December 2015 caused Tamayao to be apprehensive.

His farmland was not spared because floodwaters also reached Barangay Dangan. About two feet of floodwater submerged Tamayao’s newly planted palay for more than 48 hours. He feared that his crop, together with his hard-earned investment, had been totally devastated. Other farmers from neighboring fields even told him that all his efforts had gone to waste.

But when the floodwaters subsided, he was astonished to find that all the palay he planted stood upright—like nothing had happened.

Tamayao attributed the sturdiness of his palay crop to the foliar fertilizer he sprayed beforehand, adding that he might have suffered undue losses without it.

Tamayao advised other farmers to try using the product to protect their crops, especially now that the weather in the country has become erratic. After all, even the Philippine Atmospheric, Geophysical, and Astronomical Services Administration (PAGASA) has already warned the public regarding the possibility of a La Niña event occurring later this year, after the El Niño ends.

La Niña is the opposite of El Niño and is characterized by rainfall at levels above normal, strong monsoon activity, and formation of more tropical cyclones.

According to PAGASA, strong El Niños are usually followed by equally strong La Niñas. An example of this back-to-back phenomenon was the strong El Niño in 1997 and 1998, followed by a La Niña in 1999, in which many parts of the country experienced intense rainfall and flooding.

Tamayao shows Merian Isabedra of Global Green Organic Fertilizer, Inc. the part of his farmland which was flooded due to the onslaught of typhoon Nona but where the palay he planted survived even after being submerged for more than 48 hours

The drought caused by El Niño late last year and early this year diminished the productivity
of the farmers, particularly those who solely depend on farming as their means of livelihood.

Tamayao’s experience is a testimony to the effectiveness of the foliar fertilizer he used. Damage to agricultural crops due to weather disturbances can be prevented or minimized with the proper application of farm inputs, like organic fertilizers and related products.

Amino Plus Foliar Fertilizer is a new organic fertilizer which is now available in the market. Plants sprayed with Amino Plus are more resistant to diseases and other stresses in the field, like drought or flooding.

When sprayed, it effectively adheres to the plant’s surface and provides quick supplementation. Amino Plus boosts the growth and productivity of rice, corn, vegetables, fruit trees, ornamentals, and many other crops.

Trimmings and fish scraps, particularly of mackerel type fish, are fermented to produce the organic foliar fertilizer. Unlike other fertilizers derived from fish and other natural sources, Amino Plus Foliar Fertilizer is not processed at high temperatures, preventing the denaturation of proteins and retaining essential amino acids, enzymes, vitamins, and natural oil.

Amino Plus is manufactured in Mandaue City by the Global Green Organic Fertilizer, Inc. The product has been registered with the Fertilizer and Pesticide Authority, and is also certified by the Organic Certification Center of the Philippines.