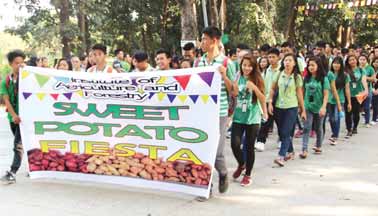 The Tarlac Caollege of Agriculture (TCA) in Camiling, Tarlac recently hosted this year’s ‘Sweet Potato FIESTA’ together with a sweet potato harvest in Barangay Sapang, Moncada, also in Tarlac.

FIESTA stands for “Farms and Industry Encounters through the Science Technology Agenda.” The event highlighted sweet potato, locally known as ‘camote’ or ‘kamote’, and the research efforts that the college and its local and international partner agencies have conducted for almost two decades.

The sweet potato is a dicotyledonous plant that belongs to the family Convolvulaceae, and its large, starchy, sweet-tasting, tuberous roots are categorized as a root vegetable.

Sweet potato (Ipomoea batatas ) is the pride of Tarlac, as the province is one of the largest commercial producers of the rootcrop in the country. It is also the banner commodity of the province of Tarlac for the Philippine Rural Development Program.

The tissue-cultured sweet potato planting materials developed by the Tarlac College of Agriculture which can grow well in the province of Tarlac.

The research efforts under FIESTA have yielded products that have improved the productivity of sweet potato farms and increased the income of farmers and processors of both food and feed. It is one of the initiatives of the Philippine Council for Agriculture, Aquatic and Natural Resources Research and Development of the Department of Technology (PCAARRD-DOST).

To be specific, it is a technology diffusion strategy, which uses events to enhance agri-aqua technology transfer and commercialization.

FIESTA, which was organized and spearheaded by TCA Director for Research and Development Lilibeth B. Laranang, kicked off with a parade which was participated in by TCA’s students, teachers, and staff members. “The sweet potato festival is the second festival that TCA has conducted on sweet potato. The Sweet Potato FIESTA, however, is the first festival funded largely by PCAARRD.

Following the opening ceremonies, an exhibit-cum-bazaar was formally opened. Different sweet potato varieties and processed products, machinery, and other equipment were up for display along with tarpaulins containing information regarding technologies for the crop. 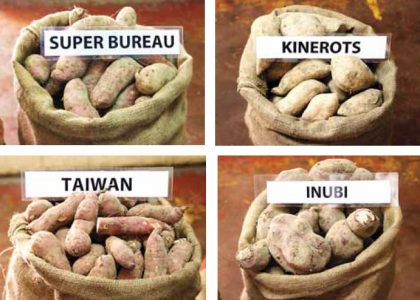 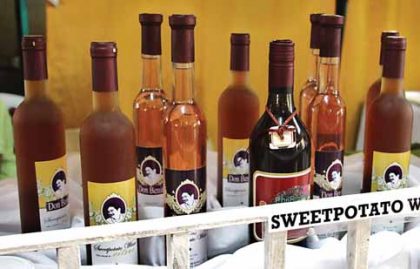 Some of the table wines that were produced using fermented sweet potatoes. 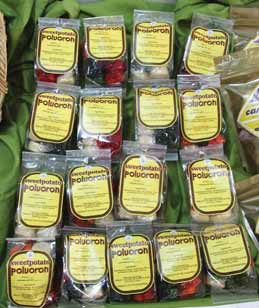 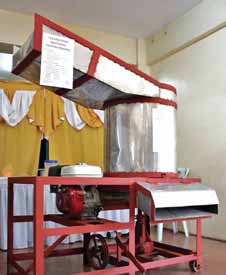 The prototype of the Rootcrops Chipping machine developed by the Tarlac College of Agriculture, which is expected to be commercially available soon for the use of sweet potato processors in the province of Tarlac.

A techno-business forum was also conducted, and the various topics which were discussed ranged from the sweet potato’s nutritional value, new improved varieties, uses, and R&D initiatives on the commodity to business opportunities. Also held simultaneously were competitions for poster-making, essay writing, and cooking.

The second day was highlighted by a farm visit to Barangay Sapang in Moncada, Tarlac, which was dubbed “Sweet Potato Field Day-Harvest Festival.”

The event was hosted by the Sapang Primary Multi-Purpose Cooperative (SPMPC) and participants got to witness and join in the harvesting of different sweet potato varieties at the farms of the cooperative’s members. The SPMPC, which is headed by Engineer Cesar L. Tabago as its chief executive officer, primarily aims to transfer basic and modern agricultural technologies to its members: the farmerfamilies of Barangay Sapang.

It also offers a soft loan financing scheme to its members with very low  interest rates. Tabago said that the farmers are the main beneficiaries of the cooperative, which empowers them so that they can attain more productive outputs, particularly with sweet potato.

As participants discovered during the sweet potato harvest festival in Sapang, a hectare can yield about 300 sacks of kamote weighing roughly 100 kilos each. During the event, they also witnessed how the farmers harvested sweet potatoes using a small tractor to unearth the rootcrops from the soil. The farmers then shift the dry soil to pick the sweet potatoes by hand, sorting them in the process. 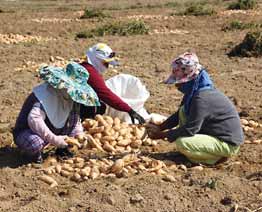 Some members of the Sapang Primary Multi- Purpose Cooperative sort out the tubers which conform to the standards of commercial buyers. 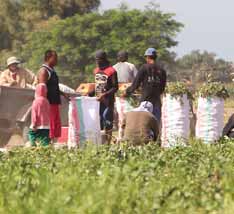 After harvesting, the newly harvested and sorted tubers are placed in sacks weighing at least 100 kilos each. 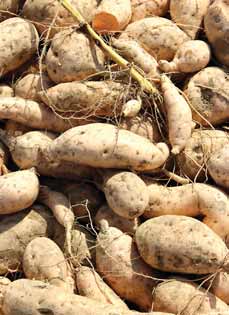 Some of the newly harvested Kinerots variety of sweet potatoes which were cultivated in Barangay Sapang, Moncada, Tarlac.

During the event, the Kinerots variety was harvested as it was the order of the cooperative’s buyer in Batangas, according to Tabago. The young leaves and shoots are harvested first, as these will be sold in the nearby markets, providing an added income source for farmers in the area.

The Importance of Sweet Potato

Here in the country, sweet potato is an important food crop in the rural areas. It is often a staple food among impoverished families in provinces, as it is easier to cultivate and costs less than rice.

The healthy sweet potato vines which grow profusely in Tarlac.

The tubers are boiled and may be dipped in sugar or syrup, while the young leaves and shoots, locally known as ‘talbos ng kamote’, are eaten fresh with fish paste (bagoong) or fish sauce (patis).

Sweet potato is also sold as street food in suburban and rural areas.

Fried sweet potatoes coated with caramelized sugar and served on skewers, called ‘kamote cue’, are popular snacks among Filipinos. Kamote is also used in a variant of halo-halo called ginatan, in which it is cooked in coconut milk and sugar and mixed with a variety of rootcrops, sago, jackfruit, and bilu-bilo (glutinous rice balls).

Relatively easy to propagate, its reject yield can be processed as feeds for livestock, as SPMPC does with its rejects. At present, the SPMPC has gained a considerable amount of assets and machines which Tabago describes as benefitting the local farmers of Barangay Sapang.

A noble project, it could be replicated in different regions of the country and eventually help uplift the lives of the Filipino farmers in rural areas.