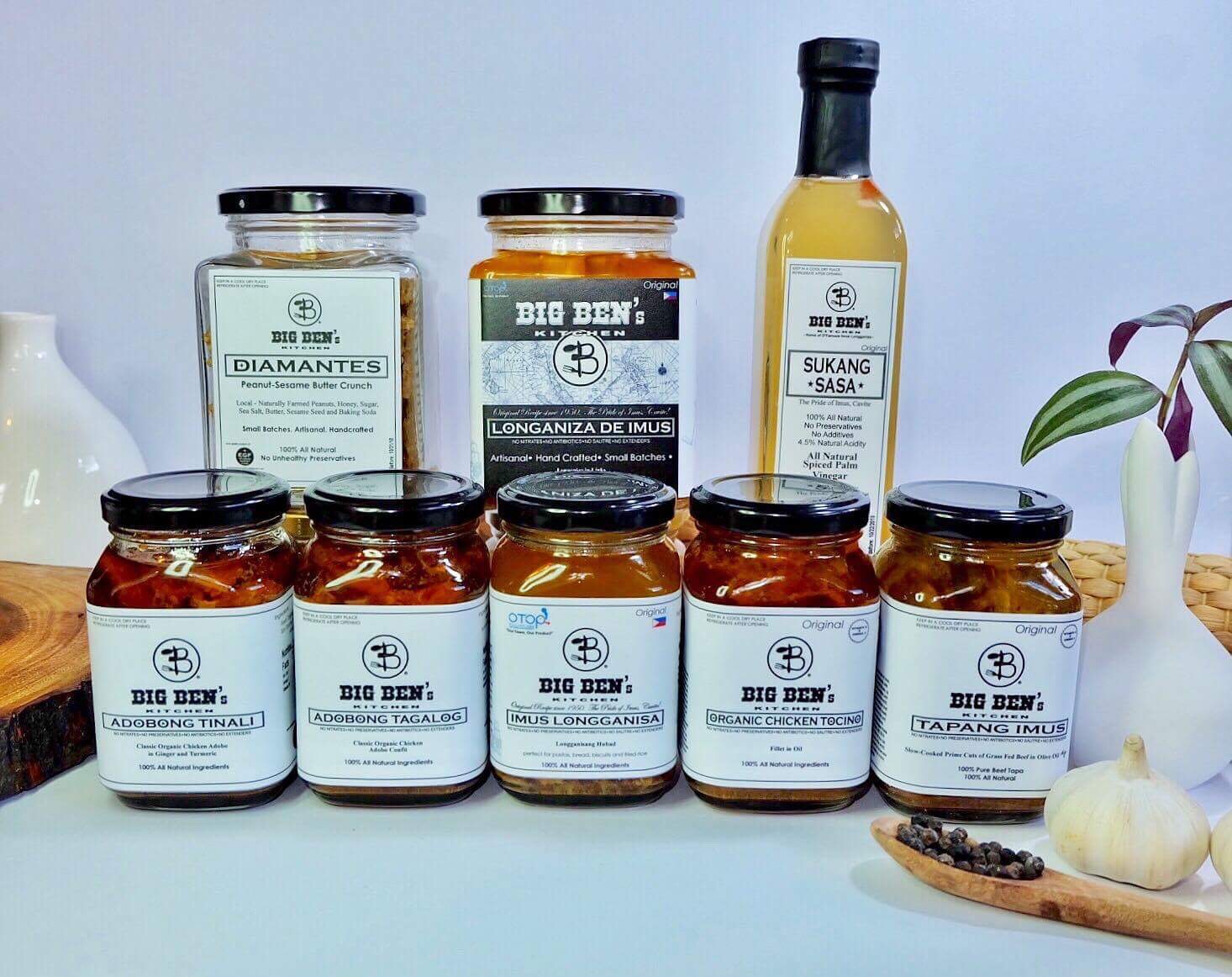 Who doesn’t love longganisa? It seems that every town has an iteration of the pork sausage, and Imus, Cavite, is no different. Imus longganisa is savory and garlicky, with none of the sweetness that characterizes the others. For many Caviteños, it’s part of a delicious, fortifying breakfast. For Gene Gutierrez, it’s what allowed him to leave his well-paying job in Singapore and come home.

Born and raised a Caviteño, Gutierrez owns Big Ben’s Kitchen, a restaurant in Imus that serves traditional Cavite cuisine. “Big Ben’s Kitchen is a restaurant named after my grandfather Ben. He taught me how to enjoy food and appreciate different tastes,” he says. “That’s how I fell in love with food.”

But Big Ben’s Kitchen would not have been possible if it weren’t for Big Ben’s Gourmet Imus Longganisa, made from his lola Teresita’s recipe. “She had the recipe since the 1950s. She used to sell in to nearby areas like Las Piñas, Bacoor, Zapote, and Damariñas,” Gutierrez says. “She stopped selling longganisa when she entered college, then went to America to teach.”

Gutierrez used to be a packaging expert based in Singapore. This background would come in handy more than once in his new venture. “Packaging helps maintain the integrity of the product and also extend the shelf life of food without using chemicals. It’s science. Yun ang trabaho ko dati,” he says. “What I learned from my former company I used to extend the shelf life of the longganisa without any chemicals.”

He started selling longganisa as a side business whenever he was on vacation in the Philippines. “We started with five kilos, then 10, 20, until such time that we cannot make it on our own so we needed to hire people,” he says. “Sabi ko bakit di natin ito gawing business na? I totally resigned. I cut my umbilical cord from the corporate world.

“During my exit interview, my boss asked me what I was going to do. I told her I’m going to sell longganisa. And she just laughed at me. She didn’t think I was serious.”

A big part of what made Big Ben’s Imus longganisa a hit is the quality of the ingredients used. Gutierrez partnered with small farms from nearby Silang and General Trias, who supply him with naturally-raised pork. “It’s not certified-organic, but it’s humanely raised and naturally fed,” he says. “We get the premium cuts.”

He’s also particular about sourcing everything locally, something he is extremely proud of. “We don’t use a single spice that is imported. It’s all locally sourced. Even the sea salt is from Pangasinan. We wanted to have the best possible raw ingredients to make the best longganisa, ever. “We don’t put any chemicals, no additives, no extenders. It’s just the spices and the meat.”

As of the interview, the company produces an average of one ton of Imus longganisa a month, with each pack retailing for about P500. “We’re trying to boost our local partner farms so we can sustainably sell more longganisas,” Gutierrez says. “However, we still want to maintain artisanal quality as possible. We’re happy with the one ton already.”

The longganisa isn’t just popular in Cavite and Manila—it’s found a following with Filipinos based overseas as well. This promoted Gutierrez to come up with bottled longganisang hubad. “It’s naturally processed so we don’t put chemicals in it. Bottled and ready to eat, it’s perfect for pasta, bread, or fried rice. It’s a good meat for stir-fried vegetables,” he says. “We try to provide convenience for on the go people without putting chemicals in the food. We only do bottling or canning techniques, and we sterilize it. It can last up to a year.”

Reaping the Fruits of Hard Labor

Gutierrez admits that success didn’t come easy. “For two consecutive years, I wasn’t reaping anything,” he says. But soon, word of his Imus longganisa spread, and Gutierrez found himself invited to showcase his products in prestigious events like Madrid Fusion in Manila and various Filipino food festivals overseas. “San Francisco invited us to come and make longganisa there for our kababayan,” he says. “The feeling that you bring joy in a little way to those kababayan is really something. That’s how I know that I know that I love what I’m doing.”

Big Ben’s packaged products has also expanded to include sausage in links (“It’s good for longsilog”), organic chicken tocino, and grass-fed tapa—everything locally sourced. “We want to be a household name among Filipinos as a breakfast staple. It’s made of all-natural ingredients and naturally raised meat,” Gutierrez says. “We want to be known as the game changer in the meat processing industry.”

The products can be found in ECHO Store, Resorts World, and is served in Villa Escudero. “It’s available in our restaurant in Imus, Cavite. We also have a small shop in Kawit, Cavite. We have several distributors in Tagaytay. We have resorts and hotels in Tagaytay who uses our longganisa for breakfast. Soon we’ll be available in the US.”

In the end, for Gutierrez, going into the longganisa business is as much about supporting local farmers as it is about spreading Cavite cuisine. “For sustainability, of course. What we’re trying to do is help our local farmers with their business and also level up their production and give them some pride,” he says. “Sometimes we tend to take for granted what is local that is premium. We’re trying to upsell local. Local is the new premium.”