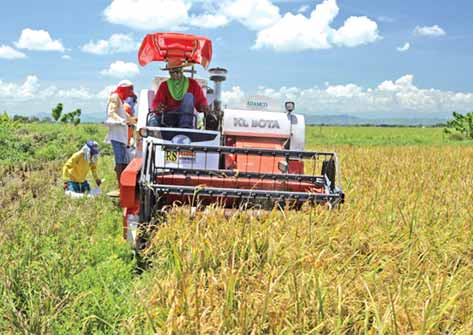 By Milagros B. Gonzalez

His name rings a bell—but the Romeo Vasquez of this article isn’t the 1960s matinee idol. This Vasquez is the Department of Agriculture’s regional Gawad Saka winner for 2014 in the agricultural entrepreneur category.

Vasquez belonged to a farm household in San Mateo, Isabela. His father was a tenant, tilling a hectare farm. To help the family, Vasquez also toiled the land and drove a jeep plying the San Mateo to Santiago, Isabela route. This working student’s hardships bore fruit and he graduated as an agricultural engineer from the Central Luzon State University in Muñoz, Nueva Ecija in 1985.

His first job was as a sales representative in a fertilizer company, and he invested in farm lots using his commissions. Now, he was a farm owner. He married Joy Bongon in 1988 and had three sons: Arvie, Arjay, and Ardell. It was his second son Arjay, then five years old, who helped Vasquez decide his career path in life: farming. The father recalls how his young son
asked what use would rich people be “…if there are no farmers to provide their food?”

Today, Vasquez is both an inbred and hybrid seed grower. His produce includes seeds and milled rice. He farms several hectares of land, both owned and leased. As a farm service provider, he operates in a 100-hectare service area using two mechanization modules. Each module has 50 hectares of land provided with a technology support package of 3 transplanters, 1 tractor, and 1 combine harvester.

For Vasquez, farming is not just work. “It is a business, it is an enterprise…”

The Benefits of Mechanization

Vasquez started farming in 1993, and adopted farm mechanization in 2012. He shares, “When I encouraged Arjay to venture into farming, he requested that we invest in farm machinery…He wanted a transplanter.”

At first, Vasquez declined because of the labor displacement the machine would cause. But when planting time and harvesting time came, and there was no labor that could be hired because of construction work on several malls in Isabela, he gave in to Arjay’s request. And he was correct in his decision, although in the beginning, there were failures.

He narrates, “In one cropping, all our seedlings died because of the wrong mixture of organic fertilizer. We were delayed in our planting. We encountered difficulties in our first use of the transplanter in the 10-hectare farm. We had no system then, but my son (Arjay) and I used the Internet and searched the websites of the Department of Agriculture (DA), Philippine Center for Postharvest Development and Mechanization (PHilMech), Philippine Rice Research Institute (PhilRice), and the International Rice Research Institute (IRRI). We studied them all and applied the knowledge [we acquired] in our system.”

“In short, the transplanter was paid [for]…After two years, there was a return [on]
investment. From one transplanter, we increased our units. To date, we have five
transplanters. Since the transplanting is mechanized, we also bought a combine
harvester in 2012 to mechanize the harvest,” Vasquez said.

The number of farmers who sought their mechanized farm services also increased because of the benefits they experienced in mechanized farm operations. According to Vasquez, their calendar is already fully booked for mechanized transplanting and harvesting services.

The agri-machinery pool of Vasquez, used for farm service, now includes 2 combine harvesters, 5 transplanters, 2 tractors, 1 mini-tractor, 1 weeder, and 2 threshers, with one thresher used as a soil pulverizer and the other as seed cleaner.

For their drying needs, they still use the multi-purpose drying pavement (MPDP) in their area. Soon, however, a recirculating dryer will be installed in preparation for the next harvest season.

Using the Internet, Vasquez and son Arjay transact farm business like providing land preparation, transplanting, and harvesting services to several farmers in the area, big and small. They also provide assistance to the farmers, especially regarding fertilizer application. For their nutrient management services, they consult the Rice Manager Philippines of the IRRI.

Vasquez takes pride in narrating how his son jokingly boasts, “Daddy, while you earned your first million at age 38, I earned mine at 24.” All because of mechanization.

Now, Vasquez doesn’t just practice mechanization; he is also an advocate for it. “Mechanization is already a world trend, especially with the ASEAN integration. Wow can we compete with other countries if we don’t mechanize?” he asked. “One of the biggest [costs] in farming is labor. Mechanization brings [about] labor and time efficiency. Although mechanization is like swallowing a bitter pill, in the long run, the whole economy benefits. If the economy is good, the farm laborers also benefit.”

The innovativeness of Engr. Vasquez in his farm operations brought back the labor displaced by mechanization. Instead of preparing seed beds in the field, he uses shallow trays that combine pulverized soil and organic matter. Seeds are placed on these trays and allowed to grow not in the fields but on the MPDP for 15 days. These seedlings are regularly watered before being transplanted to the prepared field using mechanical transplanters.

The laborers displaced during manual transplanting do the tasks of tray preparation (pulverizing of soil, adding of organic fertilizer, watering, seed placement, and placement of trays at the MPDP). Women workers are also hired to do “hulip” or planting of seedlings on the vacant spaces not covered by the mechanical transplanter.

The same is true during harvest. People are hired to pick up the harvest not covered by the combine harvester. “So we have mechanized but we did not totally displace labor. We hire them
and they earn more.” For tray preparation alone, laborers are paid R5 per tray. In one day, farm workers can prepare 1,200 trays; thus, 12 workers in tray preparation will each receive P500 per day.

Vasquez has been tapped by the Technology Management and Training Division (TMTD) of PHilMech to serve as a resource person for mechanization. Always, he inspires farmers with his
example and advocacy. “I want to share the knowledge. It is my social responsibility,” he said of his being a regular speaker during training courses not only of PHilMech but also by other agencies like the DA, PhilRice, ATI (Agricultural Training Institute), and DAR (Department of Agrarian Reform).

What is the secret of his success? According to Vasquez, he is a regular participant in agriculture-related training courses. He grabs every training opportunity he encounters. This exposes him to agricultural innovations which he applies in his farm business.

Aside from his innovativeness, perseverance, and simplicity, he shares this secret: family support and solidarity. His wife is a loving partner in life and in his work, managing finances, keeping the books, and monitoring trading activities. Arjay manages the provision of farm services, while Arvie is in charge of logistics. The youngest, Ardell, is studying BS Physics at the University of the Philippines in Diliman.

A family and their machines. The family business thrives because the family members share their knowledge and skills. As Arjay, the 25-year-old son says on how he earned his first
million: “Diskarte lang (It’s strategy).”

Yes, strategy. And their strategy is mechanization—not the cold and callous kind people expect, but mechanization with a heart.