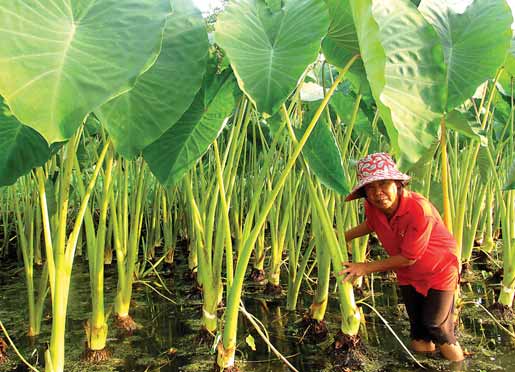 She might as well be called the “Taro Woman” of La Union.

Edna Bucales, a 54-year-old widow of Barangay Arosip, Bacnotan, of this province leads a simple life. Her daily activities revolve around tending her various mountain crops like ube, tiger grass, and ginger plants in her rolling farm. But her moneymaker crop is her giant swamp taro (Colocasia esculenta L.).

From her two small parcels of taro farm, of about 18 square meters in size each, she harvests about 30 kilos of taro stalks and 15 kilos of ‘daludal’ or taro runners twice a week. She regularly sells them to five merchants in the town market of Bacnotan. Each kilo of taro stalks fetches R10. Her daludal costs higher, at P30/kilo. This means that from her two small lots, she earns a total monthly income of about P6,600 which, she said, is more than enough to sustain the basic needs of her family of three, consisting of herself, a son (a BS Agribusiness Management graduate), and his wife.

This woman-farmer has been into taro farming for two years. Her planting materials were sourced out from Kalinga province and shared by a cousin. At first, she experimented to find whether this taro variety thrives in La Union. She failed in her first attempt when she planted
them in a plot of land that had been cleared for farming by burning away vegetation. Her plants died during the summer. Unfazed, she tried planting them next in her other rolling farm. This time, she succeeded, as a year-round supply of irrigation water is available from a nearby brook.

Here’s how ‘Manang’ Edna tends her taro farm; it’s a routine which, she says, is not
laborious to follow:

• She maintains just 3 stalks per plant to come up with quality marketable products.
• This will allow the outgrowth of more runners, too, which adds value to her crop.
• She applies 3 kilos of 14-14- 14 fertilizer only twice a month in each of her two lots. She stopped applying dried goat manure when she observed there was a resulting massive growth of grass.
• She seldom applies insecticides. She only does it when she sees some aphids infesting her plants
• Nothing in her farm goes to waste. All unmarketable stalks and unutilized leaves are used as feed for her pigs.

Hers is a story of a simple, but hardworking and enterprising woman-farmer who finds tending giant swamp taro profitable.

Climate Change Can Cause Another Shift in the Earth’s Vegetation