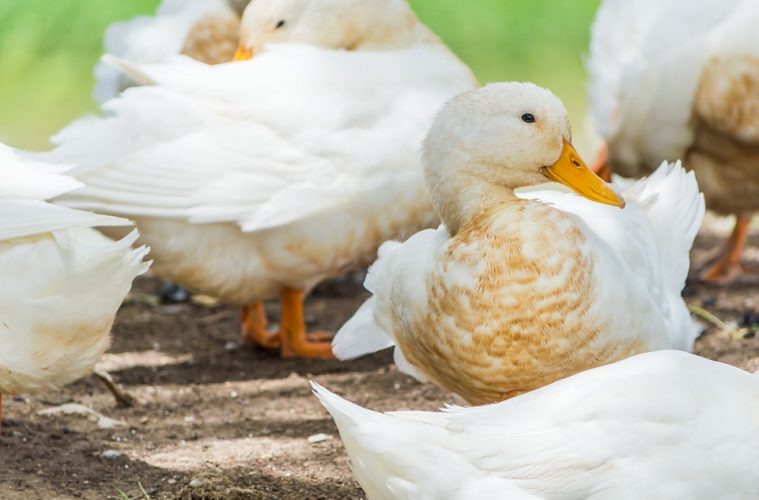 The integrated farming of rice and ducks in irrigated fields has long been practiced in China, Japan, and Korea. In the Philippines, Muscovy ducks (“itik”) are usually released into the rice fields before land preparation to feed on snails like the “golden apple snail,” a pest of rice. It is a common belief–or more accurately, misconception– that ducks can damage the rice plants.

Studies done by researchers of the Department of Agriculture’s (DA) Regional Field Office in the Cagayan Valley (Region 2) with project coordinator Lovelyn Gaspar showed that the ducks not only controlled the golden apple snail (up to 95%) and weeds in irrigated paddies, but also helped increase the yield of rice up to 36%.

The symbiotic relationship between the rice and the ducks helps both thrive.

The DA researchers say that there is a “symbiotic relationship” between the rice and ducks in the integrated farming system. The ducks provide organic fertilizer (through their manure and urine) to the rice for its growth, while the snails, insects, and weeds in the rice field serve as natural feeds for the ducks. There is less labor needed for removing weeds in paddies with ducks, and no need for the application of chemical fertilizers and herbicides. There is also a reduced emission of methane (a greenhouse gas contributing to global warming) because of the stirring action of the ducks on the paddy bottom.

In the field trials conducted at the DA’s Northern Cagayan Experiment Station in 2013 for the dry and wet seasons, two rice paddies (500 square meters each) were used. Rice seedlings (NSIC Rc222) were planted in the paddies at a spacing of 25 x 20 centimeters (cm) and a water depth of 2 to 5 cm was maintained. One of the paddies was used for the rice-duck system while the other one was for rice only.

For the paddy with ducks, 20 (200/ha) 20-day old Muscovy ducklings were released into the field for 2 to 4 hours a day after 25 days from transplanting of the rice seedlings. The ducklings were herded into the field for a period of 50 days during the vegetative (tillering) stage until the reproductive (flowering) stage of the plant. To augment the natural feeds obtained from the field, the ducks were given supplemental feeds and provided a net enclosure for their protection at night. Only organic fertilizer and biopesticides like fermented plant juice were applied in the rice-duck paddy while the recommended rates for chemical fertilization and herbicides were applied in the rice only paddy.