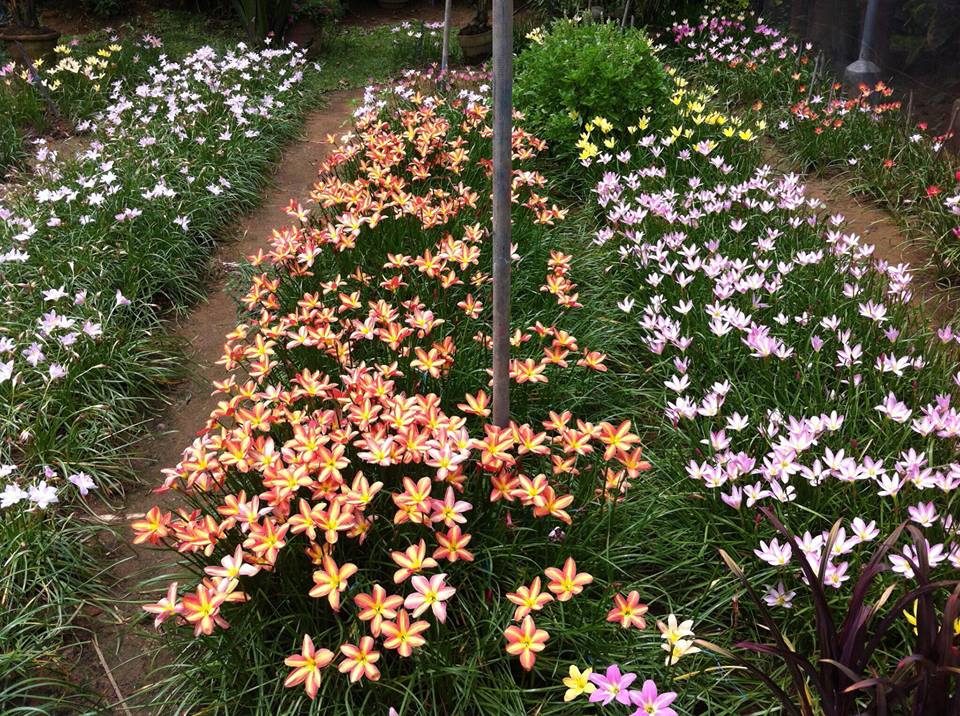 For landscapers looking for a new flowering plant that is low maintenance, this might be your answer. This has a diversity of colors to choose from, and can be tolerant to the varying climatic conditions in our local Philippine setting.

Rain lilies, popularly known as Zephyranthes, are the “Tulips” of the tropics. These grass-like bulb plants can grow up to about a foot tall and are originally from the southern parts of the US, extending to the Middle and South Americas.

Zephyranthes is a genus of temperate and tropical plants in the Amaryllis family, which includes onions, chives, amaryllis, and other bulb crops. It is native to the Western Hemisphere and widely cultivated as ornamentals. There are over 70 recognized species as well as numerous hybrids and cultivars. They usually come in white, pink, and yellow flowers. They are also known as fairy lily, rainflower, zephyr lily, magic lily, and Atamasco lily.

One man behind the breeding of this colorful and floriferous plant is Glanz Ang, a licensed agriculturist, who graduated from Xavier University/ Ateneo de Cagayan under the mentorship of Prof. Floro Dalapag. Ang is currently the biggest breeder of Zephyranthes in Southeast Asia.

According to Ang Zephyranthes grandiflora plays an important role in breeding of Zephyranthes hybrids in order to produce large pink blooms. “Recent breeding programs done in the Philippines have developed various color forms from pinwheel to round forms with flower size up to 4 inches (10cm) across. Fasciated forms with double and triple layers have been developed as well,” he says. There is certainly a vast array of floral colors from the 33 Philippine Zephyranthes hybrids developed.

Landscape use and Maintenance

Ang explains further that rain lilies are ideal and wonderful landscape plants, usually used as a ground cover or as border plants. A large bulb is capable of producing up to four scapes—the curling tops of the plants—at a time, with each scape having a single flower that is held upright. A close planting of two to three inches apart gives a massive display of blooms four to five days after rain. This can also be achieved by watering the bulbs to mimic rain in order to produce flowers on a desired day. Each bloom lasts one to two days. While the rain lily does not have flower longevity, its ability to produce a large number of flowers overcomes this limitation.

Rain lilies are easy to grow and maintain.  It loves direct and full sun. It is also generally a low maintenance plant and is generally pest-free, making it ideal for landscaping use. It also thrives with minimal feeding and watering. Monthly application of complete fertilizer supplemented with trace elements and secondary nutrients are more than enough to sustain heavy flowering. Watering can be done once a week or twice a month during the dry season or not at all. Bulbs will just go dormant when dry and spring back once it receives water.

Flowering in rain lilies is usually triggered by dry conditions followed by a few days of rain. This makes it interesting in the landscape demands where flowers can be forced when they are needed.

Rainlilies are also easy to propagate.  Propagation of rainlilies may be done in several ways: (a) through seeds, (b) divisions and (c) bulb chipping. Seeds may be harvested when the capsule starts to turn yellow and cracks open. Seeds do not need to dry before sowing. A well draining soil mix is preferred. Seeds will start to germinate in less than a week. It may take almost a year before the seedlings start to flower.

The easiest way to propagate rain lilies is through bulb division. This is done by removing offsets produced from the mother bulbs when they are big enough to handle and has rooted on its own. Offsets may take four to six months to bloom depending on their size.

For varieties that do not produce offsets freely, bulb chipping may be practiced. This is done by chipping the bulbs across the basal plate in several sections. A fungicide treatment is necessary for this procedure. Using this technique will take about a year for the bulb to bloom.

The technical part, Ang explains, is the breeding. However, anyone who has a background in plant breeding can easily follow these simple steps.

The flower structure of a rain lily is composed of three sepals and three petals. Since the sepals and petals of rain lilies look almost identical in shape and function, they are known as tepals.

The pistil is the female part of the flower. It is composed of a style and stigma. The stigma is usually a flattened, tri-lobled surface on the tip of the style.

There are usually six stamens in every flower. Each stamen is composed of a filament and topped by an anther, which houses pollen. The anther is a long cylindrical shape that splits open about an hour after the flower blooms.

In breeding rain lilies, you must choose good mother stock that is not an apomictic plant. Apomixis is the reproduction of seeds without fertilization, with the resulting offspring identical to the mother plant. Once the desired mother plant is in bloom, the anther must be removed right after the flower opens in the morning to avoid self pollination. Cross pollination is done by dusting the stigma with the desired pollen source. Fertilization is successful when the ovule starts to enlarge and develop into a seedpod.

Seedpods usually ripen in less than a month. Once the seedling has germinated and bloomed several times, the selection process for superior seedlings starts. Selection will be based on the criteria a breeder has pre-determined. Undesirable seedlings will be culled. Selected seedlings of good quality will be propagated, but will also remain for further evaluation. Once evaluated, the new cultivar is then multiplied for release to the general market.

Ang also cited future breeding plans for rain lilies. Double and triple layered blooms are already available. There are also large-flowered rain lilies that measure up to four inches. The next things to do are to make improvements on flower longevity and develop scented rain lilies using Zephyranthes chlorosolen as one of the parents. This species emits an intense fragrance. The existing hybrid to date is only mildly scented.

There are currently 33 Philippine Rainlily hybrid varieties developed by Glanz Ang, 28 of which were made available during the Horticultura Expo in Quezon City last February 2018.

For those interested to acquire the Philippine Rainlily Hybrids, Glanz Ang can be contacted at glanzang@yahoo.com and at philippinerainlily@yahoo.com

Is Tap Water Safe for Drinking?

An Ethical Approach to Dairy Farming