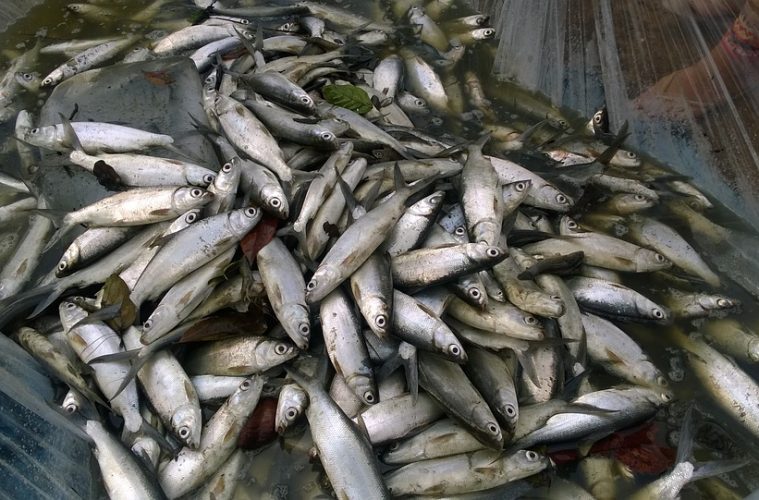 You would probably hardly believe that a lady nurse who went to work abroad to get away from the boring life she led in a fishing village has gone back to the village she disliked after 20 years. Now, 16 years later, she has become a big-time bangus producer, harvesting an average of 20 tons every day.

The lady who might as well be called the “Bangus Queen” of Anda, Pangasinan is the former Nominisa Rarang, now married to Feliciano Garcia, a chef whom she met in Libya.

In 2000, the couple, with their children in tow, returned to Philippines to start a new chapter in their lives. Feliciano, who is good in business, engaged in a buy-and-sell business based in Capas, Tarlac. In the meanwhile, Nominisa was invited by her brother to invest in fish cages for growing bangus in Anda. And that was what she did.

A typical fish cage at the FN Garcia Fish Farm is stocked with 50,000 fingerlings.

Nominisa and her brother placed their fish cages near Nara Island, which the Rarang clan owned. She started with three fish cages costing about P300,000 each. The business turned out to be profitable and that encouraged her to expand. She said that her first harvest was 20 tons per cage stocked with 50,000 fingerlings. She was able to sell her harvest in Malabon at P90 to P100 per kilo of fish weighing 400 to 450 grams each.

It was profitable because feeds at that time cost only P12 per kilo and one cage consumed just about two tons of feed in a culture period of five months. Her cages increased continually. By 2009, she had already 60 cages of her own. But fish farming has its own risks. And her fish cages were wiped out in one swing of Typhoon Emong. Nominisa took the tragedy matter-of-factly. She did not give up, though she had to start all over again. By that time, a big feed company that thought she might not be able to pay her obligations withdrew her P2 million credit line.

Fortunately, another big feed company took over and gave Nominisa the necessary financial help she badly needed. The company did not only provide the necessary feeds, she and her son Michael (who is her chief assistant) were also counseled on the fine points of running a business. What is important is that the mother and son tandem always paid their financial obligations on time and that inspired confidence on the part of the feed company in helping them all the way.

Today, FN Garcia Fish Farm operates not only its own fish cages in the towns of Anda and Sual, it also rents other people’s cages and fishpens.

Despite the high cost of feeds, about P24 per kilo today, their operations are still profitable, although at this time the going price for 400 to 500 grammers is a low R80 per kilo at farmgate prices.

The fish farm has been providing jobs for many people in Anda and the surrounding towns. There is one worker for every two cages, while one worker is assigned to one fishpen. The caretaker feeds the fish and also fixes the nets. A weekly change and cleaning of the net is often necessary.

The caretakers are given an allowance of P1,500 every two weeks and receive a share of 10 percent of the net profit. If the weather is good and the harvest is great, one caretaker can take home P100,000 per growing cycle. But there are times when the share is much lower, especially if there is the occasional fishkill. Harvesting bangus from a pond. A worker sorting the bangus in plastic tubs.

About a hundred bangus harvesters are employed each day. For every ton that they harvest, they are paid P4,500. Other employees are the drivers of ten delivery trucks who bring the harvest to the market at the Navotas fish port.

Despite the risks in the bangus business, the lady nurse who did not enjoy the life in the fishing village during her teen years is now back to her roots and enjoying every minute of it. Aside from her son Michael and his wife, his sister and her husband are all involved in the business with their own assignments. They have a prudent lifestyle although they can enjoy a luxurious lifestyle if they chose to.