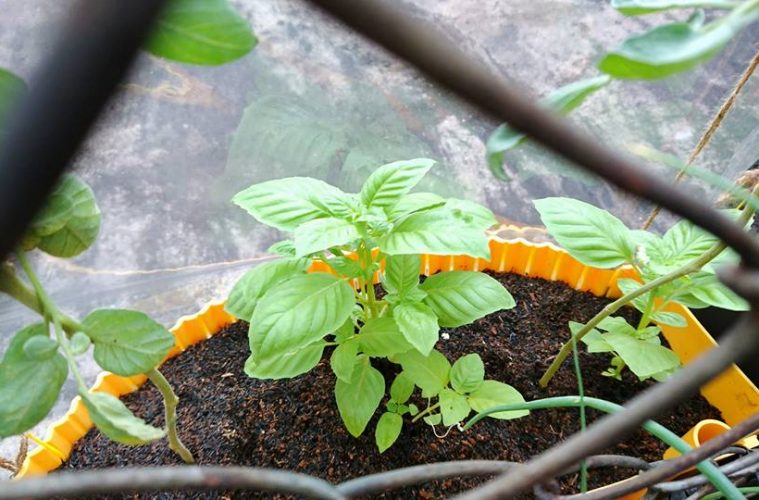 Urban Gardener Grows Her Own Food in the Metro

One thing that seems difficult to do in the polluted and overcrowded urban environment is to grow your own food. This, however, hasn’t stopped people from trying—and succeeding.

Monique Obligacion is one such person. She and her partner, Rocco Mapua, are currently trying to put up a zero-waste themed store called Druid Things. It was through their initiative in going zero-waste that urged Monique to start her own herb garden in their condominium’s roof deck.

Planting the Seed of Sustainability

Monique started her efforts by studying about urban gardening towards the end of 2016.

“I stayed up ‘til the wee hours of the morning reading articles on beginner-friendly plants on Google for months before I mustered up the courage to actually go to the hardware store, buy a pot, some potting mix, and some seeds,” she said.

At the time, the couple were already segregating, recycling, and ecobricking their non-biodegradable waste.

However, they didn’t know what to do with their kitchen waste. They eventually decided to learn how to process kitchen scraps indoors and build a garden where those scraps could be used as fertilizer. A bonus for them was that the garden could provide fresh ingredients for meals, as well as limit their purchasing of plastic-packaged produce from the supermarket.

According to Monique, the extra push came from Ron Finley’s TED Talk on urban guerilla gardening. Ron Finley is an urban gardener from Los Angeles, and Monique’s personal hero who she describes as someone who “doesn’t have a cape, but he’s got a cool shovel.”

“When we aren’t able to wake up early to go to the public market, we just go upstairs, harvest some of his leaves, and simmer the stuff in coconut cream with some garlic, onions, and kale,” Monique shared.

They’re also planning to add more to the list and start growing watermelons, patola, and snapdragons.

Benefits of Having Their Own Garden

When Monique and her partner need food, they skip going to the market to look for hard-to-find ingredients that cost them more than what they actually get. They can just head on up to their roof deck and harvest the leaves or produce from their plants.

This also keeps them from buying more than what they actually need.

The couple also grows herbs which they harvest for consumption.

“You use like 4 or 5 leaves and forget the rest of it in the fridge, and that produces food waste-contributing to climate change. And what about peppers? Or calamansi? You usually need just one or two–not half a kilo,” Monique said.

In addition, growing and harvesting their own food reassures them that they’re eating fresh, organic, and ripe produce, without having to guess the pesticides that were used or the day it was actually harvested.

But most importantly for the couple, planting helps sequester carbon from environment since plants can do so. Their condominium is located within the Makati Central Business District which is susceptible to carbon emission from different vehicles around the area.

Herbs and leafy greens are the easiest, according to Monique. Leafy greens can be grown in little pots because they only require 3 to 4 hours under the sun, and not a lot of root space. They also don’t demand a lot of sun, soil, water, or fertilizers.

Tomatoes are also good to sow toward the end of the rainy season because the plant doesn’t like to get drenched and are prone to fungal problems. It’s best cultivated once the rainy season is nearing its end and they produce all way until summer.

Lettuce also follows the same schedule with the tomatoes. Their leaves melt under heavy rains but also get bitter rapidly under hot weather. The best time to plant them is during dry but cool seasons.

Another plant people can grown in the metro is lettuce. There are a lot of heat-resistant types of lettuce that’ll thrive in the city. And while everyone thinks that it’s hipster or fancy, kale can actually thrive in the metro all year round and is very easy to grow.

While plants like tomatoes usually ask for more attention than others, low-maintenance plants help make the growing process easier. The weather also plays a role on the amount of time to give to the plants.

The couple used their condominiums roof deck as their urban garden.

During the rainy season, Monique doesn’t pay them much attention. She visits the plants maybe once to twice a week just to see how they are, harvest what they need, and mostly just say hello.

But when the warmer season strikes, Monique and Rocco have to visit and water the plants twice a day. They also set up some shade netting so their plants don’t bake under the sun.

The pair also uses fertilizers–mostly vermicast and the compost they produce after fermenting kitchen scraps with Bokashi.

“Bokashi is a stink-free way to deal with food waste, and the end-product is a nutrient-rich soil amendment you can use in the garden,” Monique explains.

They try not to use pesticides as much as they can because they don’t want to kill any bees in the process of keeping their plants healthy. But when tough times come around, they use an organic pesticide called neem. They also make their own DIY pesticides by  by mixing chili-garlic-dishwashing-liquid.

She believes that the “black thumb” is a myth.  “There is no such thing as a black thumb– there’s just experience and inexperience. If you aren’t planting anything because you’re afraid that plants are going to die on you, you’ll never learn how to grow anything ever,” she warns.

Monique and her partner also have a FaceBook group dedicated to encourage city dwellers to start planting.The group is open for everyone who shares in their advocacies of sustainability, food security, disaster preparedness, and zero-waste.

She formed the group after her experience when she was starting out with their garden.

“Other than grade school monggo beans, my partner and I had never actually planted anything in our lives,” Monique disclosed.

From the idea of having a resource to help others who went through her experience, and crowdsourcing information if they weren’t available elsewhere, Manila Grows Foods was born.

Monique figured that what better place to do it than Facebook, where everyone already is.

After getting her partner and his mom, to help her run it, they also asked a few friends and acquaintances who had more gardening experience if they wanted to help out. Some of the pioneer administrators helping out in the community are leaders in the agri-industry.

“A the moment, six other people are managing the community with me: Rocco Mapua, Gina Mapua, Rich Tuason, Danes Munoz, Maui Reyes, and Julius Barcelona—someone we look up to in the agri-industry,” Monique said.

Everybody can participate and even get the information shared within the group about urban-farming and container gardening in Manila. People are allowed to post from other places as long as they disclose their location because as growing conditions could be different where they’re from.

She encourages aspiring urban gardeners to just start planting. “Start with maybe spring onions, or kangkong, or basil. Start with just one forgiving, beginner-friendly crop. And grow your garden one plant at a time,” she advises.

Monique also invites people to join Manila Grows Food where they can ask lots of questions about urban gardening, no matter how stupid they might sound.

Manila Grows Food is a FaceBook group where people can share or gather information about urban gardening. It was created by Monique Obligacion and her partner, Rocco Mapua.