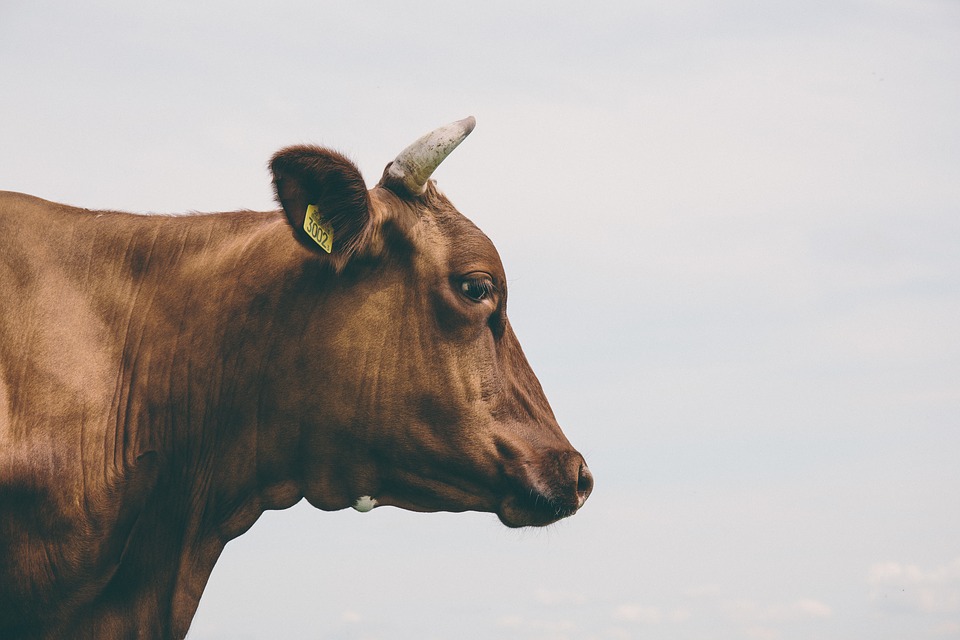 Described as a “mestizo,” Arob has a face that is uncharacteristically white, while his buckskin orange body is growing fast. And with his good-looking muscular frame, he seems to be adapting well to his environment.

Born in October 2014, Arob is among the 17 cattle conceived through artificial insemination conducted at the Mindanao Cattle Research and Development Project (MCRDP) in Bago Oshiro, Mintal, Davao City.

“Arob” is actually the acronym for the name of Dr. Antonio Obsioma, the MCRDP’s research leader. Dr. Obsioma said the project aims to transform the local cattle industry through the crossbreeding of Mindanao native cattle with superior cattle breeds from the USA. “UP (University of the Philippines) alumnus and US-DA (United States Department of Agriculture) retiree Dr. Cecilio Felix introduced the idea of improving our native cattle by trying to cross-breed it with a Hereford miniature breed from the US,” he said.

Dr. Antonio Obsioma (right) and Dr. Rafael Mercado show off Arob, the 21 month old cattle produced by a program developed by the Mindanao Cattle Research and Development Project (MCRDP) at UP Mindanao campus. Arob is a cross between native cattle and the Hereford breed.

Dr. Obsioma, who is also the UP Mindanao vice chancellor, said that while our native cattle breeds have adapted to the country’s warm climate and can tolerate adverse conditions, they are not as good as the breeds from temperate countries when it comes to producing more milk and meat. “But the good thing with them (native cattle) [is that] even under adverse conditions, they can reproduce,” he said, explaining that if the good characteristics of our local breeds are combined with those of superior breeds, better offspring can be produced.

The idea then paved the way for the establishment of MCRDP, whose mandate is to conduct research on the genetic improvement of the native cattle breeds through cross breeding with miniature Hereford bulls. Using artificial insemination, the project aims to develop a foundation herd of miniature cattle crosses. Dr. Obsioma said, “In developing our local breeds, we can attain genetic independence to sustain beef and dairy production, and likewise increase [the incomes] of smallholder livestock farmers.”

In 2013, the MCRDP was launched through a Memorandum of Agreement signed between the Department of Agriculture in Region XI (DA-XI) and UP Mindanao.

Some of the 17 cattle developed by MCRDP.

The DA, through its livestock banner program, provided P1.5 million in assistance to help develop the MCRDP livestock station located within the 200-hectare compound of UP Mindanao. “The said amount went to the construction of the building, purchase of native cattle, and operational [costs] such as feeds and wages for caretakers,” said DA livestock program coordinator Marie Ann Constantino.

The semen from a Hereford bull and seeds for the pasture grass were provided for free by Dr. Felix. Hereford cattle are a beef cattle breed widely raised in various climates primarily for beef production.

As a joint undertaking of the DA-XI’s livestock program and UP Mindanao, with support from private sector, the breeding project has already produced miniature Mindanao beef cattle with improved characteristics obtained from superior breeds.

“Since it would be expensive to transport live animals from US, we just shipped the semen of Hereford cattle and [did] the cross-breeding through artificial insemination,” said Dr. Rafael Mercado.

Dr. Mercado, who is also the DA-XI assistant director, said the cattle breeding project is in line with the agency’s mandate to ensure the nation’s food security against the backdrop of dwindling pasture lands across the country. “Ten years ago, we [had] about 200,000 hectares intended for grazing, but now it is only close to 100,000 hectares. This means we have to find ways to cope with the increasing demand for beef cattle while at the same time [maximizing] our existing pasture lands.”

In just a span of almost four years, the MCRDP has produced 17 crossbred offspring of the native and Hereford breeds. Nine are male (including Arob) and eight are females. “We have produced fast-growing and good-looking animals. We have not observed them having the difficulty adjusting to our local [conditions]. They also look fertile and within the next few months, some of the animals [will be] ready for breeding,” said Dr. Obsioma.

He also observed that the animals are docile and easy to manage. Although they are smaller compared to other breeds, they are ‘meaty’ in appearance. “They do not require too much space and look efficient since they grow fast,” he added.

the crossbred cattle (right) developed through artificial insemination by the MCRDP; the latter has a white face and buckskin orange body. (Photos by Che Palicte)

Based on the data gathered by the MCRDP, the miniature cattle grow between about four feet high and weigh from 227-300 kilos, attaining maturity in 14-20 months. Since it grows faster than the native breed, it is expected to produce more meat as well as milk.

“This type of cattle developed by [the] MCRDP can be grazed even in backyards. One farmer who owns a hectare of land can raise up to four cattle with an average weight of 500 pounds each. If you multiply that [by four], that’s about 2,000 pounds of cattle being grazed in a small parcel of land,” said Dr. Mercado, who added that women will not have a problem raising the animal due to its small size and docility.

While getting bullish on the promising results of the research project, Dr. Obsioma and Dr. Mercado admit that much still needs to be done before the crossbreeds can be commercialized. “As of the moment, we cannot talk of commercial production just yet. Our intention for now is to establish information about these crossbreeds and how they perform,” noted Dr. Obsioma, adding that the research is primarily intended to help small animal raisers.

“If [the] private sector [wants these crossbreeds to be] commercialized, we already have the technology,” he added.

As the breeding project moves forward, Dr. Obsioma said it needs additional semen, not only from the Hereford breed but also from the Jersey breed. He added that more institutional collaborators are needed to help with the project’s upcoming massive artificial insemination campaign.

Dr. Mercado hopes their proposal for expanding the project will be approved soon “…so we can reach out to other areas and tap more stakeholders in developing our local cattle industry not only here in Davao but in Mindanao and even the entire country.”

Dr. Obsioma also hopes the DA will continue to carry out these types of innovative research projects. Citing the successful experience of the Philippine Carabao Center, he envisions that
native cattle breeding will be eventually institutionalized.

As DA Secretary Emmanuel Piñol aims to increase farmers’ income and make food available and affordable for all, it’s about time to increase Arob’s tribe to offer the chance at a higher income to farmers and ensure an adequate supply of quality meat to consumers.

Big Companies Work to Help Reduce Plastic in the Ocean