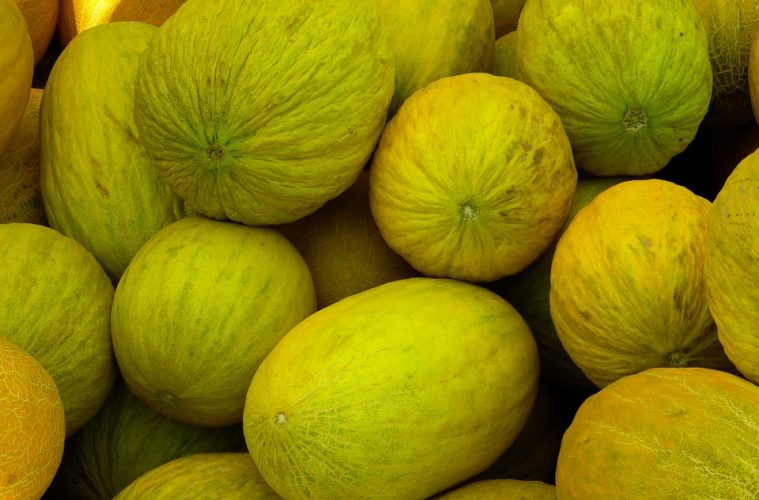 By Julius Barcelona and Aubregyn Ancheta

Who doesn’t dream of suddenly finding great treasures of gold and silver in their fields and backyards? For two simple farmers, that dream became true, though not in the way they expected. Instead of digging up treasure from the ground, they grew their fortune.

State University – Bayambang Campus (PSU) while his wife Aida is a college librarian. With four children and their families to support, it was hard to make ends meet. Still, he took pride in working for a prestigious institution; it was honest work, and respectable.

Growing gold is serious business. Mario Payumo checks his harvest carefully to ensure only the best quality of flavor and sweetness can be found in his Brilliant honeydews.

His opportunity came in 2013 when PSU decided to lease out some of its idle property. While it was a bit of a risk, Payumo decided to try his luck at growing crops. He had heard stories of farmers down in the central plains making good money from the production of high-quality honeydews, and reached out to Known- You Seed Philippine’s local technician Aubrey Ancheta.

Payumo fell in love with the Brilliant variety of honeydew, which has bright yellow-gold skin. He also learned that growing honeydews was no joke. They were easy enough to grow, but it was very hard to produce quality fruits without proper care and maintenance. While the plants could survive and produce fruit without any problems, getting the right sweetness and flavor was the hard part.

With just a hectare to start with, their struggles began, with them needing special tools such as plastic mulch and lots of fertilizers. Payumo crammed as many plants as he could into the property he leased, trying to waste as little space and money as possible. The hardest part, he says, was finding people they could really trust to care for his Brilliant. As an employee of PSU, he could not abandon his responsibilities to work in their field full-time.

It was easy enough to find people willing to work for them; many claimed they were experts at growing honeydew, only to disappoint when push came to shove.

Selling his Brilliant was a different challenge altogether. Being new to the market, many unscrupulous people took advantage of their relative ignorance of the market for honeydew, and often bought their produce at outrageously low prices. Sometimes he would come to an agreement with a buyer, only to be left hanging when the time came to sell. Buyers claiming that his produce was “second-class” made him doubt himself quite often, and he came dangerously close to giving up. But as Payumo says, “If you love what you do, there’s no reason to give up.”

So he persevered, and one day, he realized that he could make the most out of his Brilliant by selling his entire harvest wholesale instead of trying to get the best price per kilogram of fruit. He also started developing the skills of people who could grow Brilliant for him instead of trying to find and be disappointed by people claiming to be experts.

Payumo’s planters check and secure the Brilliant honeydews before transporting them to clients.

Payumo’s perseverance and patience paid off tremendously. In just two years, he has expanded
to three hectares crammed full of Brilliant honeydews, and he has added other Known-You Seed varieties such as Sweet Flavor melons and even other honeydews like Jade Lady.

His advice to new farmers? Never cheat your partners and the people who work for you. Fruit traders from Manila, Pampanga, and Nueva Ecija all keep coming back to him because they can trust that he will have the best quality Brilliant ready for them.

Payumo is rather shy when asked about how much he makes per hectare of Brilliant, but he notes with pride that he and his children all have houses to call their own—these were built little by little with each passing season.

Thus the happiness of his smile as he surveys his fields, the glint of gold fruit swelling from underneath leaves of green.