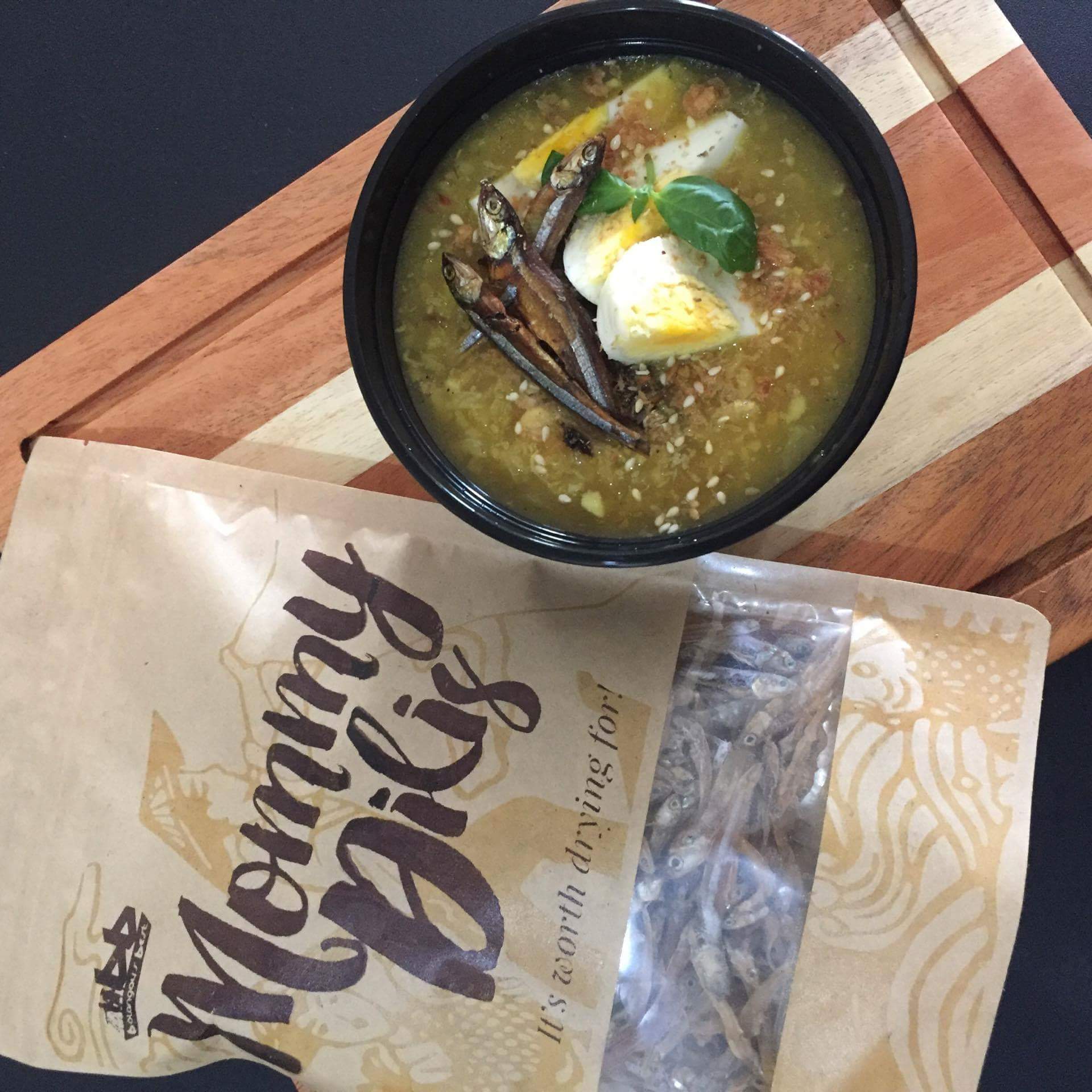 The life of a fisher can be difficult. It can mean long hours at sea waiting for an unsure amount of catch, which is sometimes sold at meager prices.

This did not sit well with Jet Ong, CEO and co-founder of Fishers and Changemakers, and her colleagues, the people behind Balangay’s Best, a brand of sustainably caught dried seafood that’s ready-to-cook, and soon, ready-to-eat. The brand is a staple in many bazaars and is known by its nice packaging and fun-sounding names like ‘Darling Danggit’ and ‘Papa P,’ as in ‘papa pusit.’ Not only is it a unique presentation of aPinoy dining room staple, it helps seaside communities and sea life conservation as well.

It all started after typhoon Yolanda in 2013. Ong and her friends were social workers working with Gawad Kalinga on a project in Bantayan Island, Cebu. The project gave boats to fishers who had lost theirs during the storm. “(After the) project (was) done, we thought of really doing something more for the fishers because we thought it was not enough,” she says.

The colleagues put up Fishers and Changemakers, which distributes Balangay’s Best brand of dried, sustainably caught seafood. “We saw that poverty among fishers is really high and even though there were a lot of assistance already from the government, the difficult life is really just the same,” Ong explains. “We thought that the best thing to really help them is to journey with them and start the enterprise with them. This company is not just owned by us but the fishers are also shareholders of the company.”

Ong, who is also a teacher, witnessed typhoon Yolanda’s aftermath firsthand. Not only was she tasked to facilitate the boat-giving among the different islands and barangays, she also taught values formation and other lessons that might help strengthen the communities and encourage bayanihan. “When I was there, I saw that from 3pm to 9pm, they were out there at the sea and when they come home, they only get less than a kilo of squid. I think that was not really the best scene that I would want to see,” she says. “At that time, it was I think Php120 per kilo. (They take home) even less kasi di nakakaabot ng isang kilo. And that’s from 3pm to 9pm. Hindi pa lahat kasi may utang pa sila, so binabawasan pa yun. Yung nauuwi nila, halos wala na. Yun yung gusto namin baguhin.”

One of the first things the group did was find ways to help raise the income of their partner fishers. “Because we partnered with the fishers, we thought of really increasing their income,” Ong says. “The first thing we did is to choose a price that would help them (raise) their income. So from Php120 per kilo, we bought the fish or the squid at Php180 per kilo. In that way, kahit hindi abot isang kilo, medyo mataas pa rin. We’re trying to also help them with their debts kasi hangga’t may utang silang binabayaran, parang doon papunta lahat ng kinikita nila. That’s how we try to help them.”

Next, they tried to promote sustainable fishing to both their partner fishers and later, the consumers themselves, arguing that even though it takes more effort, in the long run, it helps preserve ocean life, and thus, the fishers’ livelihoods as well. “We saw that sustainable fishing part was not really a practice. We thought that if we want to help the fishers increase their income, we should also look at the bigger environment where they’re getting their livelihood,” Ong says. “The idea is for them to practice sustainable fishing and in doing so we will incentivise them for practicing it, that’s why we buy higher.”

Ong and her colleagues knew that wanting to help fishers wasn’t enough; they had to know how to strategize as well. They turned to international conservation organization Rare (rare.org) for help. “Their expertise is really to capacitate the local governments and fishers and other partners in practicing sustainable fishing. We partnered with them so our communities would also know how to do sustainable fishing,” Ong explains.

Part of this was setting down strict rules on what constitutes sustainably caught seafood: “We follow (Rare’s) core criteria. First, the fisher must be registered in the local government or in the municipal government. Second, the equipment should also be registered because it might be that the nets are too small and that’s not sustainable. Third, they must fish the right size of fish. Not too small because it won’t grow anymore, it can’t reproduce. Fourth, they fish at the right time and at the right volume,” Ong enumerates.

The group also helps other communities Rare works with find a market. “They have these products being developed but they don’t have a market. That’s where we come in. We started in Bantayan but now we’re in Mindoro, in Surigao, and also in Negros. Rare ensures that the community is practicing responsible fishing and what we assure is that there’s a market for their products,” Ong says.

Community partners undergo strict training to ensure the quality of their products. “We start a community-based enterprise from the wives of the fishers or even the fishers themselves if they want to join. We train them on starting a business. We partner with DTI and DOST for… good manufacturing practice training, costing and pricing, and (product development). They (learned) how to make bottled sardines and ready-to-eat spicy dilis or squid,” Ong says.

For their part, Ong and her colleagues work on marketing. “We developed the packaging, the layout. We tried to really explore what good packaging would really fit their products na hindi siya mangangamoy. We’re at the stage where we’re trying to explore more products. Currently, our products are all uncooked. The next phase is to sell ready-to-eat,” she says.

Part of the fun was coming up with names for their products. “I remember there was a friend of Dhang’s who said, ‘I think you should have very cool names.’ So she gave the first name, and that’s Darling Danggit. Next we thought of more cool names so we said, let’s have Papa P—so it’s Papa Pusit and Mommy D for Mommy Dilis. We just love creating names.”

Some community members that have benefited from sustainable fishing.

Their selection of products depends on what’s available that season: “We have dilis, pusit, danggit, and bangsi—that’s flying fish. And soon we will have more species. The idea is that if a community has an abundance of this kind of fish, then we’ll (sell) that,” Ong says.

Fishers Seeing the Beginnings of Change

Buying sustainably caught seafood at competitive prices and marketing them as premium goods has not only made the brand sort of a household name in the bazaar circuit, it’s also gotten people interested in meeting the fisherfolk.

“Before, the fishers weren’t used to getting attention. Now, a lot of people go to the community and the fishers feel valued and feel that what they do is important—they’re not just fishermen,” Ong says. “That’s what we really want to happen—that (consumers) really know (who catches) the fish that they are eating. We want to—for everyone—the diners, the consumers, to choose sustainably caught or responsibly caught seafood products.”

The endeavor has caught the eye of the international community as well. Balangay’s Best has won the Ashoka Changemakers and Nestle Creating Shared Value prizes. “Since we won, we have money—because there’s a prize—and we’re at the stage where we’re really exploring and expanding. More communities, more new products, that’s why the next phase will be ready-to-eat bottled products, and more stores,” Ong says. “We want to do all these things while we protect the ocean. Right now, we have a lot of fishers going to other communities to give training. We want to have more of them to go to other communities, so fishers training fishers.”

Quite the embodiment of the saying ‘teach a man to fish, and you feed him for life,’ isn’t it?