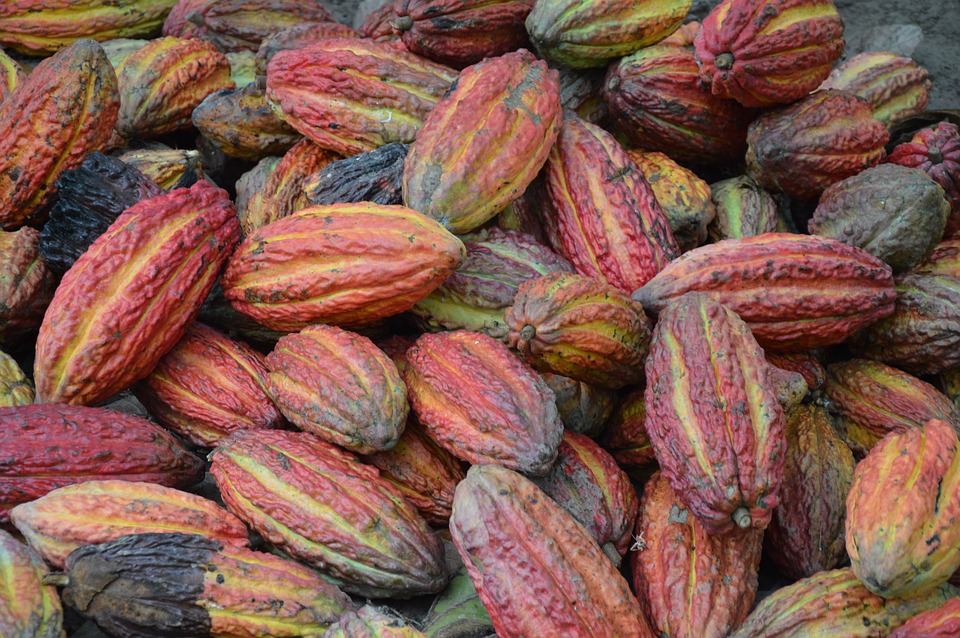 When Typhoon Yolanda toppled banana and coconut plants on his two-hectare farm, 62-year old Lendo Martinez was in a quandary: he had a loan to pay back, and the organization to which he belonged had a contract to supply a company processing banana chips for export.

“It was a sure market and my income from banana was enough to send my three grandchildren to school,” he said. “When you have a big market, you get an assurance of continuous income. All you need to do is to work hard, and you will earn.”

Leony Marquez posing with the ever -bearing BR25 or Red Criollo cacao from Brazil at Sarian Farm in Teresa, Rizal.

So when a municipal agriculture official came to his area to distribute cacao seedlings, Martinez’s first question was, “[Will] we have a steady buyer [for cacao] when we harvest?”

Since 2015, government and non-government agencies that are assisting in the livelihood restoration of Yolanda-affected areas in Eastern Visayas have been promoting the planting of cacao to augment the income of farmers while they await the recovery of the badly devastated coconut industry.

“There is…overwhelming enthusiasm from different stakeholders on the prospects of a cacao industry in the region,” says Cynthia Nierras, regional director of the Department of Trade and Industry, in an interview. “We see the demand, we have the resources to meet the demand.”

According to the Department of Agriculture (DA), there is a guaranteed market for cacao because local demand alone far exceeds production. Philippine cacao production stands at 10,000 metric tons (MT) annually, while consumption is at 50,000 MT. The deficit is imported from cacao-producing countries like Indonesia, which is the third biggest producer in the world.

Some 90 percent of local cacao production is in Mindanao, with 80 percent of it from the Davao region alone. Eastern Visayas currently contributes just two percent of national production, mainly from old cacao trees that survived the pest infestation of the 1980s.

In the world market, global demand for cacao has tripled since the 1970s. The two largest markets, the US and Europe, are growing at the rate of 3% annually. From 2004 to 2009, cacao net imports did not go below 1.6 million MT. Global sales of chocolates are expected to reach US$ 147 billion in 2017.

Research firm Euromonitor International also noted that the global demand for chocolate rose 0.6% to a record 7.1 million tons in 2015, led by a 5.9% jump in Asia, led by China and Japan. It also expects the Philippine chocolate market to increase by 13 percent in 2017. Worldwide cocoa production, on the other hand, fell 3.9% to 4.2 million tons, estimates the International Cocoa Organization. Among the reasons for this were pest and disease infestation, and the age of trees in the traditional cacao producing countries. Deterioration of the peace and order situation, and the spread of epidemics like the ebola virus in some countries has also contributed to the decline in production.

“On the global scale, this is a big opportunity for the Philippines because everybody is looking for alternative sources of cacao beans and chocolates,” says Nierras.

From Backyard to Export

Cacao growing in Eastern Visayas is not new, but as an industry, it is in its infancy, says Nierras.

Cacao seedlings. Cacao has much promise in terms of production in Eastern Visayas, especially since it is also a good intercrop for coconut.

Dr. Francisco Dayap, focal person of High Value Crops Development Program at the Department of Agriculture regional office, says cacao was introduced in the country as early as the 17th century by the Spaniards.

Up to the early 1980s, Eastern Visayas was considered a big cacao producer until an infestation of pests and diseases considerably reduced production levels. A few cacao trees have remained standing to this day, but the once high-income generating product has mostly become part of backyard gardens whose yield only serves the consumption needs of the family that owns it.

Eastern Visayas has embarked on a nationally coordinated 2020 Philippine Industry Cacao Challenge to increase national cacao bean production to 100,000 MT by 2020. This means the country is targeting to contribute 2% of the total global production and turn the country around in the industry, from an importer to an exporter of cacao beans.

Under this challenge, the region is asked to contribute 5,000 MT of beans annually. The same volume is being asked for from the Zamboanga Peninsula, while the Davao Region is expected to produce 60,000 MT.

“We are turning cacao from backyard gardening to a commercially viable endeavor that we can export,” says Dayap. “Farmers will enjoy the full support of the government and well as other stakeholders.”

One strategy is to intercrop it with coconut trees to give the cacao plants some shielding and protection, especially when there is a typhoon, Dayap said.

“Cacao has [much] promise in terms of production in Eastern Visayas, especially [as] it is also a good intercrop for coconut,” added Nierras.

A technical working group was formed in October last year to create, among others, the Value Chain Analysis Workshop for the cacao industry that gathered stakeholders, including cacao farmers, processors, and consolidators.

One of the recommended varieties of cacao is BR25. In photo are BR25 cacao seedlings at the Sarian Farm.

At least three government agencies have already either committed to distribute, or have already distributed, almost 3 million of the high yielding variety of seedlings to farmers. The Philippine Coconut Authority (PCA), under its Kaanib Enterprise Development Program, has already distributed 707,750 cacao seedlings; the Department of Environment and Natural Resources, through the National Greening Program, gave 5,000 seedlings; and the Department of Agriculture’s HVCDP (High Value Crops Development Program) has distributed part of its 2,018,319 seedlings commitment.

“Some have already been planted. But we have to monitor what happened to those [seedlings] that we have distributed. Were these planted?” Dayap said. “There have been reports that some of the seedlings we distributed were not planted, [that] some were seared during the prolonged dry spell. So we have to [do a survey to find out] how many survived. We will monitor [the seedlings], including those that were planted by [the] PCA.”

Most of the seedlings were sourced from the Davao region due to a lack of local resources for planting materials. Currently, the DA maintains four nurseries which are being developed to meet the need for more planting materials in the future.

International nongovernment organizations helping with livelihood restoration in Yolanda-devastated communities have lent their support to this endeavor.

In Eastern Samar, the international non-governmental organizations People in Need and Oxfam have drafted an Eastern Samar Cacao Industry Value Chain Analysis Map, which is a roadmap of the different levels of their support to this endeavor.

The plan includes the establishment of three nurseries in the province through the support of different line agencies and local government units. They also plan to provide training sessions on nursery management.