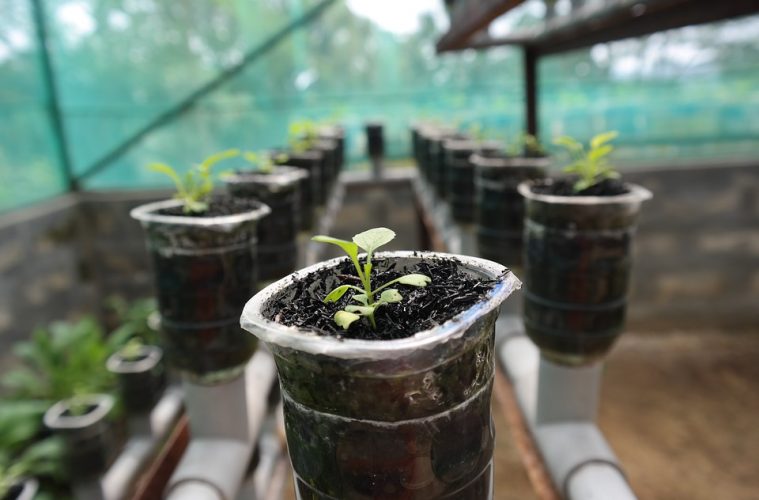 Did you know that a simple hobby can become a lucrative business in the field of agriculture? That’s what happened to Robert Iglesias of Gumaca, Quezon who, at first, ventured into hydroponics as a hobby.

Robert Iglesias poses with some of the fruiting vines of the BR-4 Japanese cucumber variety.

Eventually, he found out that through hydroponics, he could produce different varieties of vegetables in his backyard.

Hydroponics is the system of growing plants without soil. The method allows urban gardeners to grow plants in a controlled environment. Using this method, off-seasons can be eliminated because hydroponics allows its adherents to practice uninterrupted urban farming.

Another advantage of hydroponics is that a practitioner can maintain the system by him or herself, and it can be used all year-round.

Different varieties of vegetables like cucumber, lettuce, upland kangkong, and even sweet pepper can be produced successfully through hydroponics, as Iglesias discovered; he used Condor seeds for his purposes. He also found that with simple hydroponics, plants can grow better when the practitioner uses various plant nutrients which are now available in the market.

His other tools for his urban hydroponics farm included readily available materials like seedling plugs, culture pots, nutrient solutions, and an improvised shelter or greenhouse. Iglesias mainly uses discarded Styrofoam fruit boxes as the base or culture pot for the plants and his nutrient solution. The seedling plugs can also be created using Styrofoam cups with holes cut into the bottom.

To keep the plants he grows in place, Iglesias uses a mixture of soil, carbonized rice hull, chicken manure, and coco coir in his seedling plugs. His nutrient solution is composed of tap water and a mix of fertilizers, including Peters General Purpose, Peters Hi-Nitro, Peters Yield Booster, and Peters STEM or Soluble Trace Element Mix. The improvised greenhouse used for hydroponics can be located in a practitioner’s backyard or any available space where sunlight and good ventilation is available because plants grown using hydroponics need to be protected from the elements. Iglesias shows the inner part of the Styrofoam box where the concoction of plant nutrients is poured. Lettuce can be grown easily through hydroponics.

According to Iglesias, hydroponics is simple, and a modification of the system has allowed him to expand his hobby into a profitable venture. With his modifications, he can produce at least 10 kilos per day of the BR-4 Japanese cucumber variety he grows in his urban hydroponics garden. Not bad for a backyard industry, considering that he has only about 40 vines of the cucumber variety.

Iglesias shared that his hydroponics venture prospered with the help and assistance of the technical personnel of Allied Botanical Corporation in the region.

So if you have a very limited space and you would want to venture into urban farming, hydroponics could be the answer.