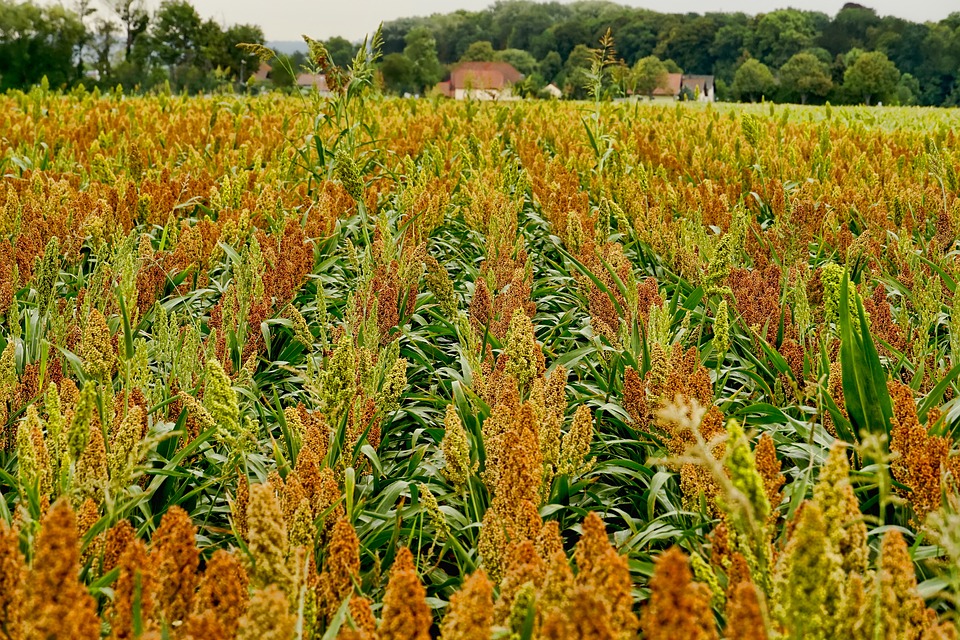 Sorghum offers something for just about everyone. For health-conscious consumers, it’s a good source of fiber and antioxidants and is gluten free. For growers, it’s productive under heat and drought and can thrive in soils where most other cereal grains can’t. And for historians, Benjamin Franklin is credited with successfully introducing sorghum to the United States in 1757.

Sorghum growing at a breeding nursery. (Photo by Robert Klein)

Decades of breeding has produced sorghum suitable for a swath of 14 states extending from Texas to South Dakota. Sorghum is growing on 8.8 million U.S. acres this year, which represents a 24-percent increase from last year. The crop is worth an estimated US$1.9 billion.

Diseases and pests, however, continue to evolve and threaten sorghum’s future. Because sorghum originated in the Tropics, there are challenges to breeding new varieties for temperate regions. Many tropical sorghums flower when day lengths are short. By the time the days are short enough for flowering in temperate regions, it’s often too cold for producing a sorghum crop with sufficient grain.

Agricultural Research Service (ARS) plant geneticist Robert Klein, with the Crop Germplasm Research Unit in College Station, Texas, and his colleagues have developed new genetic resources for sorghum breeders: newly converted tropical sorghum lines that will thrive in temperate climates and have the genetic potential for high grain yields in the United States. The work is important because with climate change and water shortages, sorghum is becoming a critical option for staving off hunger overseas and an attractive alternative to U.S. crops that require more water. Like other producers, sorghum growers are always interested in higher yielding crops.

For breeding trials, Klein and his colleagues selected sorghum lines from the ARS Plant Genetic Resources Conservation Unit in Griffin, Georgia, that were known for producing high grain yields in countries such as Sudan and Ethiopia. Because they were originally from sorghum’s center of origin in Africa, the lines selected would not flourish in temperate regions. But they had the potential to produce high grain yields while offering resistance to some of nature’s most daunting threats.

The researchers used molecular and traditional cross-breeding techniques. Essentially, they “converted” tall, late flowering tropical sorghum plants into lines that will mature faster and come equipped with genes for combating future generations of pests and diseases.

Along with helping to ensure sorghum’s future, the work demonstrates the value of the ARS collection in Griffin, where sorghum lines from around the world are kept viable. “This work wouldn’t have been possible without the USDAARS collection and the efforts of those who maintain it,” Klein said.

The research was partially funded by the Sorghum Checkoff program, which is supported by growers. The results were published in the Journal of Plant Registrations in January 2016.

(Reprinted from the September 2016 issue of AgResearch Magazine)

How Spain Got Rid of African Swine Fever, Part 1: History

How the Spanish Got Rid of African Swine Fever, Part 2