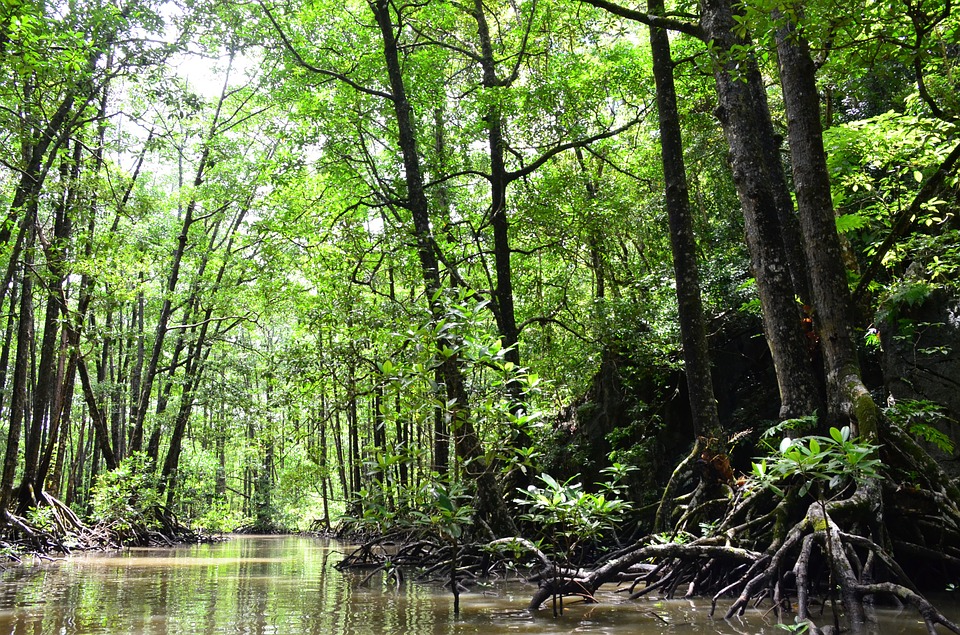 Mangroves consist of shrubs and trees that grow in the middle and upper intertidal zone (between low and high tides of the sea) of our coasts that are “inundated not more than 30% of the time.” As an ecosystem, mangroves provide not only direct benefits such as wood and other forest products, but also many other environmental services like the protection of beaches and coastlines from storm surges, waves, floods, and soil erosion. They also serve as habitats and nursery grounds for numerous terrestrial and aquatic organisms, and as storage for carbon and sediment.

The total value of mangroves has been estimated to be US$14,166-16,142 per hectare per year, with 63-67% of which is allotted for coastal protection. The amount of carbon that is stored or sequestered in mangroves is four times more than that in rainforests, and this makes mangroves very important for climate change mitigation.

Caring for young mangrove plants in a coastal area.

From the 400,000-500,000 hectares of mangroves in our country in 1918, only 256,000-263,000 hectares remained in 2001 due to conversion into fishponds and human settlements as well as for industrial purposes. There is a National Greening Program led by the Department of Environment and Natural Resources to plant mangrove species in deforested and afforested areas throughout the country.

According to Dr. Jurgenne Primavera, a mangrove specialist of the National Academy of Science and Technology, Philippines and chief scientific mangrove advisor of the Zoological Society of London, there are about 35 mangrove species in the country. Based on the tidal zone, there are mangrove plants like the “pagatpat” (Sonneratia alba) that grow well in the lowest part of the zone where the substratum is sandy and exposure to the seawater is highest, and there are species like the “bungalon” (Avicennia marina) and the “bakawan” (Rhizophora sp.) that thrive better in the middle and upper parts of the zone that have a muddy substratum and lesser exposure to the sea.

Planting the wrong mangrove species in the wrong place can be useless and wasteful, Dr. Primavera asserts. In a 63-hectare mangrove reforestation area in Ivisan, Capiz, for instance, the planting of “bungalon” in the low intertidal area did not work out because the transplanted seedlings had a very low survival of only 5%; in addition, a heavy infestation of barnacles and filamentous algae smothered the plants. However, the seedlings of “pagatpat” planted in a seven-hectare sea front area in Ibajay, Aklan enjoyed a 50-80% survival rate.

In the Community-based Mangrove Rehabilitation Training Manual produced by theTropical Forest Conservation Foundation, Inc. (www.zsl.org/mangroves/manual), a 100- meter “Green Belt” of mangroves for protecting coastal beaches and a ratio of four hectares of mangroves to a hectare of fishpond for sustainable coastal aquaculture is recommended.

A Forest’s Bounty Besides Timber