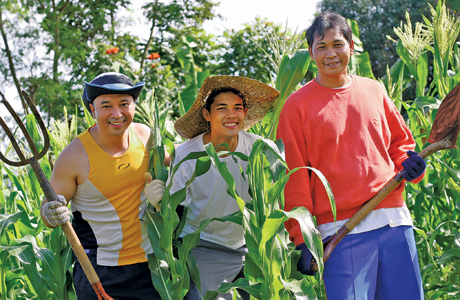 Jairus Ferrer is at home in both the city and in the fields.

It’s a common fear in agriculture worldwide that the industry doesn’t hold a lot of appeal for young people, who would much rather hold corporate jobs.

For iFarms CEO Jairus Ferrer, the journey has been quite the opposite.

Ferrer grew up in Cagayan de Oro and Bukidnon, surrounded by the city, as well as fields and mountains. He always knew that he would end up in agriculture. So it was a bit of a surprise when he ended up as a model. “After resigning from the farm school institution in Bukidnon, a few weeks later, I was randomly invited to a fitting in CDO, which to my surprise was a PMAP (People Management Association of the Philippines) show! I was invited to be part of the organization by then President Phoemela Baranda. Right place, right time. That’s how it started,” Ferrer says.

His body of work includes walking for Eric Raisina , Renee Salud, Randy Ortiz, Philippine Fashion Week, and Style Origin. He was also in a campaign for Coca Cola.

Though he enjoyed the lifestyle, especially when it came to connecting with people. A knack for organizing led him to become PMAP Special Projects Officer, which gave him the opportunity to show what models are like behind the glitz and glam.

And yet, Ferrer always planned to return to farming. So when he was offered a marketing position in Hineleban Foundation, he didn’t think twice about saying yes.

From (Camera) Flash to (Coffee) Field

Ferrer used the skills he cultivated as a PMAP officer to help bring the coffee brand into the public consciousness. Since the Foundation was based in his home province of Bukidnon, it was easy for him to get along with partner farmers and to listen to and understand their concerns and triumphs, which he managed to craft into a compelling story for the brand.

He also supervised organic vegetable deliveries to high end clients like Healthy Options, and  started his own venture, Cenyu Probio Chicken, where he also learned about the food trucking business by driving a delivery truck to deliver chicken to supermarkets early in the morning. He did this side by side with modeling. “There were many days where I was a driver in the morning and I would do shows or have business meetings in the afternoon,” he says.

The Future of Agriculture

Now Ferrer has set his sights on agricultural technology. His just-launched company, iFarms, aims to directly connect farmers and buyers.

“There are various trading systems in the Philippines. You have brokers, you have traders, truckers in between, and you have a buyer. From the buyer, you have a trader and all that and retailer. Then retailer cooks it and consumer. Ang layo, diba? Every step from this big of a product, pagdating doon sa dulo, wala na. Sobrang mahal,” he says. “The goal is to create a technology platform where food producers and local consumers act in harmony while engaging in the agricultural trade. Some other countries are doing this already. But we have to find a way to integrate it in an archipelago setting.”

Through iFarms, farmers can post the available harvests and quantities for the day for potential customers to pick from.

“(The system) now is (the farmer) harvests (first), tsaka pa lang (siya) maghahanap ng buyer. And because of that, it increases waste because of uncertainty and low price,” Ferrer says. “… we want to have a data driven system where there’s harvest supplement. Ang vision namin is pag gising ng producer, makikita na niya ang orders niya. Yung activities niya for the day is fulfillment (of orders) na.”

The program will run on blockchain technology, which means that payment and tracking are secure. “This is where (our partner) TraXion Tech comes in. They have provided iFarms an avenue where we can integrate financial products like epayments, online payments, and e-banking,” Ferrer says.

The company is first working with Nueva Vizcaya Agricultural Trading. “…they’ll take care of consolidating orders for buyers from the farms. And yung counterpart nila dito will be the one to distribute. That’s the ideal setup kasi ayaw na nila makipag-compete sa mga bagsakan…. But that’s the Manila setting. The producers also want to reach their locality and other cities in the Philippines.”

Jairus Ferrer is at home in both the city and in the fields.

Buyers that stand to gain from this include retailers, hotels and restaurants; essentially anyone who needs anything agricultural. “Businesses really (need) continuous requirement of something, so we’d really like iFarms to be that focal point of ‘If I want to look for something, I’ll look for  it in iFarms.’”

Encouraging the Youth to Farm

It seems that the company may have arrived at a fortuitous time. There’s a school of thought that says that a way to encourage young people to work in agriculture is to make it interesting for them. This can mean anything from making farmwork Instagrammable to modernizing the way the system works, lessening uncertainty and increasing profit. This is the most important part: assuring people that agriculture can be moneymaking.

“We’re going to work with the next generation. The digital natives. We confirmed that with these areas, the way they manage it, yung mga anak na yung nagpapatakbo or yung mga next generation na,” Ferrer says. “The basic idea is local farms can be found now. And it’s not just for produce. It can also go for people who have a specific variety of tree or orchid. Anything that someone farms, we’d like to put it in the system.”

Even when he was a model, Ferrer has always tried to find a way to use his passion and profession in service of his fellow men. He’s doing the same as an agripreneur, and on a grander scale. “The philosophy is really fill the earth and make it productive, (to) dignify agriculture as a noble and worthy profession, and to see young Filipinos go back to their land and choose the agricultural path as a way to prosperity,” he says. “(We want to do it by) integrating modern day technology into this.”

Right now, iFarms can only be accessed via its website at ifarms.ph but there are plans to roll out the app by next year.