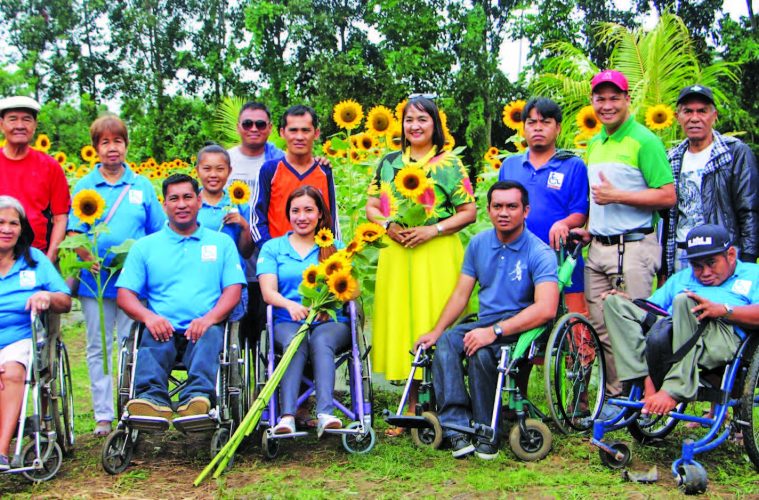 A group of persons with disabilities (PWDs) has proven that they can also accomplish “normal” persons can do, and their accomplishment may change misconceptions that people may have about them.

Fresnedi poses with SIKKAP member Jhoy Escalona, one of the persons with abilities working at Sunshine Farm Philippines in Tiaong, Quezon.

Following their achievement at a farm in Quezon province, they can now be considered “persons with abilities” or PWAs instead of PWDs.

It all started at the not so idle property of Rhodora Palomar-Fresnedi in Barangay Lalig, Tiaong, Quezon. Fresnedi’s twin passions may have fuelled her determination to push through with the project: first, her desire and advocacy to help PWDs, and her love for flowers, cultivating and later on arranging them.

Fresnedi’s past stint with a multinational company allowed her to help a number of PWDs to find jobs, and this is something she wants to pursue after she retires. While she had a lot of ideas, she wasn’t sure which one to implement then.

Then she met Allied Botanical Corporation (ABC) president Mike Caballes during an event. Caballes is behind the successful launch of the country’s first-ever “Sunflower Maze” at ABC’s research and development facility in Tayug, Pangasinan last year.

Taking a cue from Caballes’ pioneering project, Fresnedi got the idea of developing a sunflower farm where PWDs could be tapped for labor, in order to pursue her advocacy of helping them to find a job. Less than two weeks after meeting Caballes, she quickly implemented her concept and initially hired two PWDs to help her sow the sunflower seeds, and later on, nurture the sunflower plants.

Proper sowing of the Vincent’s Choice DMR variety of sunflower seeds that were used in the farm, and cultivation of the sunflower plants became possible through the technical support provided by Rudy Dian, the sales manager of ABC who was servicing the area. Vincent’s Choice is pollen-less, has more petals, grows in 45 to 50 days and flowers early, and can be raised as a potted plant or for cutflowers. It’s considered the “true” sunflower that customers prefer.

Dian also shared his expertise on the proper use of farm inputs like Klasmann Ts3 for sowing the seeds, Peters water soluble fertilizers, Vegegrow, and Verno for the proper growth and blooming of the sunflower plants. These inputs are likely responsible for making the sunflowers taller and sturdier; they also bloom earlier and are more attractive.

Dian and Fresnedi among the fully-grown Vincent’s Choice DMR sunflowers at the farm.

With the rising manpower needs for maintaining the sunflower farm, additional PWDs were hired, on a rotation basis, with the cooperation of Ven Villanueva, president of the Samahang Isinusulong ang Kapakanan ng mga may Kapansanan (SIKKAP) in Tiaong, Quezon. With the increasing number of SIKKAP-Tiaong members, and their enthusiasm and dedication to their jobs on the farm, the sunflower plants grew very well, and in just 45 days after transplanting the seedlings, sunflowers started to bloom, transforming the once idle farm into an awesome sight.

According to Villanueva, butterflies and bees started to come in, contributing to the wonderful spectacle. People from different areas also started to visit the farm, likely awed by the sight of the blooming sunflowers, and astonished to learn that PWDs had helped in transforming the farm into an extraordinary place to visit. Many of the visitors also started to buy sunflowers, and took selfies with the attractive flowers as their background.

While the sunflowers were still in full bloom, orders for cutflowers started to surge. Now, Fresnedi has more orders than she can fill.

Now, the once idle land, which is along the national highway, near the Tiaong City Mall and beside the Green Gate Orchid Farm, is known as Sunshine Farm Philippines. While it is “…a project that benefits our differently-abled brothers and sisters,” Fresnedi has made it commercially viable with the sunflower project, which sustains the employment of the PWDs.

The farm now employs at least 10 PWDs. Fresnedi does not hire PWDs just to cultivate the flowers and sell the produce. She aims to expand the business so that she can hire more PWDs. This, she says, is the primary purpose of Sunshine Farm Philippines: to plant the seeds of hope to encourage persons with disabilities to “rediscover their abilities.”