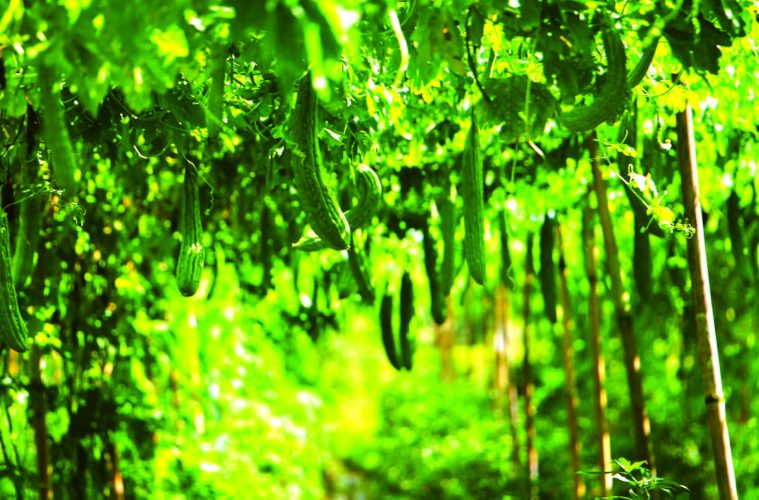 Advantage of Intercropping and Proper Inputs

Generally, intercropping is described as the agricultural practice of cultivating two or more crops in the same area at the same time. This practice is often associated with sustainable agriculture and organic farming.

The fruiting ampalaya plants on the trellises and the rows of hot chilli pepper plants below at the farm of Lolita Rodriguez in San Rafael, Bulacan.

Intercropping results in higher yields from a piece of land by making use of spaces that are not utilized by a single crop. It can also encourage biodiversity by providing a habitat for a variety of insects and soil organisms that are not present in a single-crop environment. These organisms may also provide the crops with valuable nutrients, such as through nitrogen fixation.

Another advantage of intercropping is that when the price of one crop fluctuates, the other crops might compensate for the loss in income.

This is the practice now being utilized by Lolita P. Rodriguez at her family farm in Galas Maasim, San Rafael, Bulacan. Aside from bitter gourd, she also planted a local variety of hot chilli pepper and a panigang pepper under the trellises of ampalaya.

But Rodriguez said that careful planning is required, taking into consideration the kind of soil her farm has, the climate prevailing in her area, and the varieties of crops to be planted. She also explained that it is very important not to plant crops that may compete with each other for physical space.

One example of the intercropping strategy she used is to plant a deep-rooted crop with a shallow-rooted crop. This is why she opted to plant the two varieties of peppers underneath the trellises of her ampalaya vines.

But when asked as to why she opted to cultivate pepper under the trellises of ampalaya, Rodriguez said it was because pepper plants usually need a sufficient amount of sunlight to be productive.

Rodriguez explained that the nutrients of Amino Plus Foliar Fertilizer, which she sprays on the vines of ampalaya, also benefitted the plants below, adding that the foliar fertilizer she used compensated for the lack of sunlight needed by the pepper plants to thrive.

Rodriguez says the nutrients of Amino Plus Foliar fertilizer which she sprays on the vines of ampalaya also benefited the plants below.

True to her word, it could easily be seen during a visit to her farm in Bulacan that the fruits of her plants, which she described to be of better quality, were abundant.

At first, Rodriguez says she was hesitant to use the fertilizer after Bernie Villaceran of Amino Plus Foliar Fertilizer introduced the farm input to her. But after using it for several weeks, Rodriguez said she noticed a remarkable improvement in her crops, so continued to apply the fertilizer.

For his part, Villaceran said the product contains compounds that promote plant growth, and does not contain toxic or carcinogenic materials. He claims it is a good source of fertilizer as it contains effective microorganisms consisting mostly of lactic acid bacteria, nitrogen fixing bacteria, and yeast, which act as bio-fertilizers for plants.

Villaceran explained that when sprayed, the foliar fertilizer effectively adheres to the plant’s surface, provides quick supplementation, increases the yield and growth rate of crops while boosting crop resistance against drought, and improves plant vitality and self-defense processes.

The foliar fertilizer also has long-term beneficial effects on the physical, chemical, and biological aspects of the soil, and the microorganisms are highly efficient agents in promoting plant growth and increasing tolerance of disease-causing microorganisms.

Rodriguez said that the various advantages of intercropping, coupled with the benefits of using Amino Plus Foliar Fertilizer, have encouraged her to continue the practice in succeeding cropping seasons. Adding that she has already used the product on her rice plantation during the last planting season, she claims that her harvest increased from 110 cavans to 150 cavans per hectare.

Amino Plus is certified as organic by the Organic Certification Center of the Philippines or OCCP.

For more information, visit the Organic Certification Center of the Philippines (OCCP).