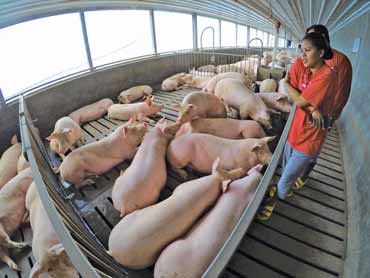 When discussing how Dr. Ariel Peregrino manages a huge piggery operation that boasts 2,000 sows to address the pork requirements of more than a hundred meat shops, restaurants, and other outlets owned by its mother company, it’s easy to be impressed.

The mother company is the highly integrated RDF Feed, Livestock and Foods, Inc. established by Dr. Robert Lo, a veterinary doctor-turned entrepreneur. RDF stands for Red Dragon Farm, the name of his first company when he started as a contract grower of a big poultry integrator. The enterprise has since expanded to include a feedmill, poultry and swine production, meat shops (Fresh Options), restaurants, and other outlets.

The piggery is a major player in the integrated business and Dr. Peregrino has been tasked to be its operations manager. The setup is quite unique compared to other commercial piggeries. For one, the farm does not sell the piglets produced by the 2,000 sows. They are all fattened to be slaughtered then processed into a variety of meat products sold through the company’s meat shops and restaurants. A breeding farm with 1,000 sows is found in San Jose, Tarlac and another in Magalang, Pampanga with the same breeder population.

Planning, forecasting, and coordination are very important in running the big piggery, according to Dr. Peregrino. Plans are made on a weekly, not monthly, basis. That’s because months have different number of days whereas all weeks have seven days. Forecasting is also very important; it’s to ensure, he says, you will know how to go about achieving your targets. Coordination with the other players in the integrated business is no less important because you have to be a team player.

From Weaning to Finishing

During a recent visit to the piggery’s farm in Floridablanca, Pampanga, weanlings were observed prior to being brought there for fattening. A batch of 400 weanlings (four weeks old) were brought to a 400-square meter building equipped with exhaust fans, automatic feeders, and waterers. They stay in that building until they are ready for shipping to the slaughterhouse.

To produce the 400 weanlings, 60 sows are inseminated artificially at the same time on a Thursday. The female breeders are induced to come into heat with the help of hormones, Sixteen weeks later, they will give birth on a Friday. And 28 days later, the piglets will be weaned on a Saturday and brought to the growing and finishing house.

The breeders, by the way, are confined in steel crates. In many other piggeries, the needle teeth of the piglets are clipped as soon as they are born to prevent them from damaging the teats of their mother.

At the RDF piggery, they don’t clip the needle teeth. Aside from being laborious, clipping can sometimes cause infection. They have a way of preventing damage to the mother’s teats. This is done by feeding the mother pigs frequently, say, six times a day. Dr. Peregrino explained that the sow will always stand when eating, and so the piglets don’t suckle for long periods. This helps prevent damage to the teats. Not clipping the needle teeth is one way of avoiding stress in the piglets.

Another way of avoiding stress among piglets of different sows is to allow them to mingle with one another as early as one week from birth. It is done this way: the mother pigs are confined in crates, each with a divider. On the seventh day, the divider of two crates is removed so the piglets will mingle and get familiar with one another. On the next week, the dividers of two other adjacent crates are removed so that more piglets will become friendly with one another instead of becoming aggressive. This, again, reduces stress among the piglets, which is good for their wellbeing.

Did you know that sexy breeder pigs will produce better litters and that they will also have a longer productive life? That’s another thing that can be learned from Dr. Peregrino. He said that a sexy breeder pig is one that is neither too thin nor too fat. It means that an eight-monthold gilt that is ready for breedding should weigh 130 kilos. That’s the ideal weight of a sexy pig. On a scale of 1 to 5, the sexy animal has a body score condition (BSC) of 3.

What happens if the pig weighs less than 130 kilos? Well, according to Dr. Peregrino, the body of the prospective mother pig will not have enough reserves come farrowing time. The animal will become thin quickly after giving birth and that is bad because it will have to be culled early. The condition can also adversely affect the potential LSBA or “litter size born alive.”

And what happens if the gilt is too fat, weighing more than 130 kilos at 8 months old? Well, they will eat more feed during gestation and that means they become more expensive to maintain. Usually, the fat breeders produce less milk for their litters.

On the average, breeding sows give birth 4.5 times before they are culled. But the objective at the RDF Piggery is to increase the longevity of the animals. Best performers can give birth eight times, says Dr. Peregrino. And how do you achieve that longevity?

Aside from good nutrition, the gilts should have a good start that considers weight, age, and BCS. Good management during gestation and farrowing include prevention of lameness through hoof and leg management. Constant monitoring is also done as often as possible, including BCS through calipers, back fat through a Renco lean meter, and feed adjustment according to body condition. Feed adjustment can easily be done because the feed supply to the animal is controlled by computer.

Lastly, biosecurity is very important. All those who enter the farm observe very strict protocols to prevent the entry of disease organisms.

These strict protocols are apparent with a visit to the growing and finishing facility in Floridablanca. Before entering the premises, visitors have to take a bath and change clothes, into trousers and shirts provided by the farm. Camera bags, cellphones, and cameras have to be exposed to ultraviolet rays.

Visitors have to wear sandals provided by the farm then walk almost a kilometer to another point in the piggery where they change trousers, shirt, and sandals before proceeding. In the grower-finisher house, the caretaker cannot leave the piggery until the hogs are harvested about five months later. After harvesting, the caretaker is given a two-week vacation. That’s also a very important measure in the name of security.

Another unique strategy at the RDF Piggery is that the fatteners are fed vegetarian feed. This means that the feeds given to the animals only contain proteins that are sourced from plants like soya and corn. There’s no fishmeal and other ingredients from animals like bloodmeal or meatmeal. Why? Fresh Options, the meat shop chain of the company, is very particular about the flavor of the meats they sell. Using fishmeal and the like in the feed could impart some kind of fishy flavor (“malangsa”).

The company has its own feedmill that supplies only the requirements of the piggery and the poultry farm. It does not sell its feeds to outside customers. That’s why it can maintain the desired quality suited to each stage of growth of the animals.

Did you know that a breeder pig will consume one ton of feeds a year? For the 2,000 breeders alone, that is 2,000 tons a year. The fatteners require big quantities as well.

RDF Feed, Livestock and Foods, Inc. has come a long way from its modest beginnings in 1988. It has more than a hundred meat shops in Central Luzon and Metro Manila. Customers can buy fresh cuts, marinated, ready-to-cook, ready-to-heat, and other value-added meats. The company boasts of its own restaurants like Meats and Match, a hole-in-the wall type of food kiosk; Roberto’s Coffee and Tea; Robbie’s Deli in a Hurry; Hot Kitchen; and Chicken All Ways. The company has also generated a lot of jobs for Filipinos, directly employing 1,300 men and women.