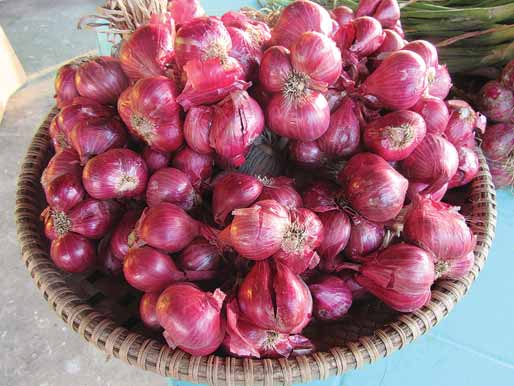 More than 200 farmers from towns in Ilocos Sur, Ilocos Norte, Pangasinan, and elsewhere witnessed the potential of Maserati as a moneymaker for farmers during the recent Allium Festival held at the farm of Jose Madriaga in Tay-ac, Bantay, Ilocos Sur. Maserati is a new shallot hybrid introduced only last year by Ramgo International Corporation, a pioneer in the vegetable seed business in the Philippines.

Beautiful Maserati harvest from a planter in Vintar, Ilocos Norte impressed the farmers for the big size of the bulbs and their intense red color, which are characteristics sought after by traders as well as consumers. At the same time, the attendees also witnessed the very excellent stand of the Maserati plants in Madriaga’s farm which were 65 days old from transplanting during the event.

As per the harvest in Vintar, one square meter could yield as much as nine kilos, according to Madriaga. Bulbs of 15 plants make one kilo. Judging from the robust stand of Madriaga’s plants at the time of the festival, he said he could harvest P120,000 worth of fresh bulbs, including the leaves, at only P20 per kilo from 4,000 square meters. During the Allium Festival, we learned that a kilo of Lasona, the local variety of shallot, was selling from P25 to P30 per kilo.

Because of the excellent performance of Maserati in Ilocos, many of the attendees said they will definitely plant the new variety in the next planting season, which could start next October after the harvest of rice. One lady government employee who planted the native Lasona this past season, Violeta Cabebe, said she will surely plant Maserati next time. Her lady companion whispered to us that Ms. Cabebe had sold her standing crop Lasona to a trader from Urdaneta City for a big sum. With Maserati, she can expect an even higher income.

Madriaga sowed his seeds in a seedbed and transplanted the seedlings when they were 28 days old with three leaves. Transplanting is easy at 4 inches between hills. After 80 days from planting, the bulbs are harvestable.

By the way, Madriaga is the barangay chairman of Tay-ac, which speaks well of his leadership. He is a creative farmer who implements techniques in farming that maximize the use of limited farm space to produce food and other agricultural products.

He grows vegetables and other high-value crops year-round. These include ampalaya, tomato, cucumber, okra, and string beans. By using irrigation pumps, especially during the dry months, he is able to produce different valuable crops for sale throughout the year.

One of his techniques to maximize his harvest from his farm is relay cropping. This is done by planting a new crop in a field with standing crop so that when the first crop has been harvested, the intercropped variety will take its turn to be productive.

One example is what he has done on his field planted to Red Dragon onion. When the onions were 50 days old, he planted tomato seedlings at appropriate distances in the onion plantation. When the onions are harvested about 50 or 55 days later, the tomatoes will already be starting to produce ripe fruits. Harvesting could last for 15 to 20 harvests. He has planted a very high-yielding tomato so that even if the price per kilo exfarm is only P8, it is still profitable for him.

In his previous tomato planting, Madriaga said that harvesting can be done every day in a one-hectare tomato plantation, harvesting from just a portion at a time. In that previous crop, he was able to harvest 2,000 to 4,600 kilos every day. Even at P8 per kilo, the daily gross was substantial. For harvesting 2,000 kilos, he usually spent P1,500 for the harvesters. Aside from the harvest from the tomatoes, Madriaga says that by planting tomatoes between his onion plants, destructive insects are repelled.

In his standing crop of Maserati shallot, Madriaga intercropped yellow corn for livestock feed. At the time of our visit (March 1, 2018), when the onions were 65 days old, the corn plants were already 1 foot tall. Next May, they will already be ready for harvesting.

What is important in order to be able to practice relay cropping is that you have a way to irrigate your plants. Madriaga irrigates his onions every 9 days using a pump run by either electricity or diesel engine.

Robot farmers are the future

Insects to serve as alternatives for fish feed