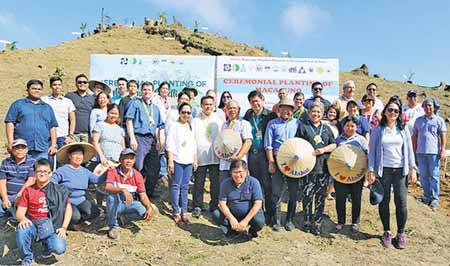 A lot can be done when people work hand-in-hand.

Different government agencies converged and collaborated to establish the first Makapuno Island in the Philippines. Last February, the Makapuno Island project was launched in Alabat Island, Quezon. “This project is not just a government project, but a project of the people,” says Alexander Madrigal, regional director of the Department of Science and Technology (DOSTCALABARZON).

Since 2009, DOST-CALABARZON and the Southern Tagalog Consortium for Industry and Energy Research and Development (STCIERD) have been collaborating for the revitalization of the makapuno industry in CALABARZON. After numerous planning sessions and workshops, the idea of a “Makapuno Island” was formed. Through the efforts of the DOSTCALABARZON, Philippine Coconut Authority (PCA IV-A), Department of Agriculture (DA-IV-A), the Southern Luzon State University (SLSU), and the local government units (LGUs) of Alabat, Perez, and Quezon with support from the Department of Trade and Industry (DTI-IV-A), Department of Labor and Employment (DOLE IV-A), National Irrigation Association (NIA IV-A), Office of the Provincial Agriculturist-Quezon, and the Office of Congresswoman Angelina Tan, the Makapuno Island project was kickstarted. The launching ceremony was attended by the Philippine Chamber of Commerce (PCC) – Toronto, and the trade mission delegates from Canada who assessed the investment opportunities in Alabat Island.

The Makapuno Island Project aims to establish a Makapuno Island in Alabat Island, Quezon by initially putting up a 110-hectare makapuno plantation that would address poverty on the island by giving farmers an additional income source, while significantly contributing to the island’s economy. The different government agencies will cooperate to support the island with Embryo Cultured Makapuno (ECM) seedlings and processing technologies.

Also included in their plans is working on the island’s branding; it will be known not only as a main source of makapuno but also of coco sugar. To optimize the resources of the island, they are also looking into integrated farming.

The project yielded positive support from its partner agencies. The efforts of the government agencies and the potential of Alabat Island were seen by the Trade Mission delegates.

Vermelyn O. Evangelista, technical supervisor of PCRDF, assured beneficiaries that the PCRDF will continuously extend their research and development of ECM. She also discussed the processing technologies that the islanders can later use for their makapuno products. Meanwhile, Erlene Manojar, regional manager of PCA IV-A, declared PCA’s support by assuring the beneficiaries that “from production, processing, up to marketing, PCA will provide the help Alabat Island will be needing.”

Mayor Fernando L. Mesa of the Municipality of Alabat thanked all the agencies that made Makapuno Island possible. He assured everyone that they will work hand-in-hand with the various concerned agencies towards the progress of the Island.

The program concluded with a MOA signing of the partner government agencies, a commitment board signing of the “Adopt-a-Makapuno Tree” project, and declarations of support from the different participating agencies. A ceremonial planting of Makapuno seedlings was held at Brgy. Villa Jesus Weste. Rolando Mesa and Rene Mesa, coconut farmers, gave their testimonies regarding makapuno farming and how ECM can be of great help to the island’s economy.

Need of millennial farmers in the US arises