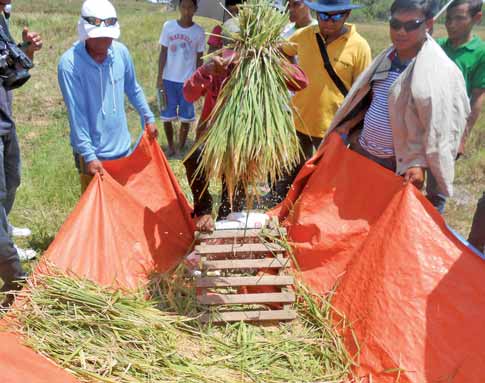 In May 1992, the late Abraham Tadeja, who produced organic fertilizer, brought me to Cabanatuan so I could interview his customer who started very poor but had become rich, a millionaire in his own right after 22 years of farming with a business sense.

The fellow was Anastacio “Amang” Lopez of Brgy. Baquero, Cabanatuan City who only finished elementary schooling. When he got married at 20, in 1970, all he had was 8,500 square meters of rice land given to him by his father. At that time, he did not even have money to cultivate the farm. He had to borrow from a local rice miller so he could buy some seeds, fertilizer, and other inputs, and then paid his debt with his palay harvest.

When I interviewed him 22 years after he got married, he already owned 14 hectares of irrigated rice land and also tilled another 10 hectares mortgaged to him by other landowners. His small bamboo and wooden house, which was blown down by Typhoon Saling some years back, had been replaced with a spacious concrete house complete with the amenities of modern living like a refrigerator, fine furniture, stereo, color TV, and even an encyclopedia set.

He also owned three power tillers, a rice mill he bought for P300,000, and a truck worth P450,000 for transporting his produce. The cash-strapped farmers also depended on him for loans. He had become a financier whose borrowers paid in the form of palay.

How did Amang become so rich? The answer is hard work and common business sense. He could easily spot a moneymaking opportunity, like in those early years when threshing machines were still unknown and threshing was done by the “hampas” method that required blowers to winnow the threshed palay.

Amang readily saw an opportunity to make money. He sold a couple of his pigs so he could buy a blower which he rented out to farmers. The farmers who rented his blower paid him two kilos of palay for every sack winnowed. Since one blower can winnow 200 cavans daily, that meant 400 kilos of palay rental every day, equivalent to 8 cavans.

Later, when the mechanical thresher arrived on the farming scene, Amang saw another moneymaking opportunity. He sold some more of his pigs so he could buy his own thresher. This was even a bigger earner for Amang. In one harvest season, his thresher could earn for him 500 cavans of palay.

With the palay that borrowers paid him, he and his wife had to put up a small store in Cabanatuan where they could sell the rice from their own harvest and from the payments-in-kind by farmer-borrowers.

The story of Amang could inspire other small farmers to have more business sense and be more enterprising.

Bees can tell if our air is polluted