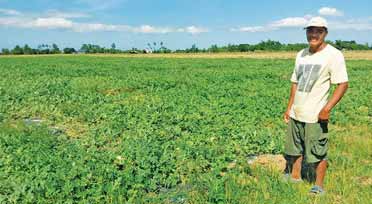 During a program at the Hortanova Farm in Lipa City last January, Simon N. Groot, the founder of East-West Seed, revealed that it was not easy to sell farmers on the idea of planting hybrid seeds. It took the company about ten years before 20 percent of local farmers finally appreciated the advantages of planting hybrid vegetable seeds. After that, it was fairly easier to convince more farmers to grow hybrids.

Rabanera has bought a tractor not only for cultivation of his fields but also for hauling his harvest.

One of the beneficiaries of hybrid crops is Renato C. Rabanera of Alaminos City, who is now considered the “Watermelon King” of Pangasinan. He was once a small-scale planter of rice and watermelon. But with the good results he got from watermelon, he was able to increase his production and, of course, his income. Last cropping season, he was able to harvest 120 tons of Sugar Ball watermelon that earned him P1.8 million.

As a result of his good income, he has adopted improved techniques of crop production. He has bought a tractor not only for preparing the land for planting but also for hauling his harvest; a truck to deliver his watermelons to the market; additional hectares for a bigger operations; techniques like the adoption of drip irrigation, germinating seedlings in seedling trays; the use of plastic mulch; and others. Above all, he was able to send his four children to school.

According to Mario M. Bibat of East-West, Rabanera loves planting the Sugar Ball hybrid because it is a vigorous variety that produces big fruits and is resistant to diseases.

This appeared in Agriculture Monthly’s April 2018.

Cucamelons: Superfood that fit on your palm