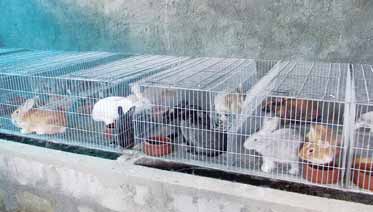 The third class municipality’s development was disrupted by peace problems, as it was once caught in the crossfire between rebels and government forces. This conflict ruined their agricultural facilities and slowed down the delivery of basic services. And so the residents took the initiative in forming a local peace committee that worked for the declaration of San Jose as a zone of peace, to be protected by its own people from violence, intimidation, and terrorism of all kinds. This committee also exercises vigilance in the protection of the town’s natural resources and environment.

Engineer Ramil de Vera and Romy Capitulo (now the town administrator), being advocates of local peace building and the conservation of the environment and natural resources, were among the initial peace committee members. When Capitulo was elected vice mayor, he convinced de Vera to join the local government to better pursue his advocacies. Given the task of working with the Environment Management Bureau (EMB), whose mission is to restore, protect, and enhance environmental quality towards good public health, environmental integrity, and economic viability, de Vera took on the challenge and set aside his lucrative business as contractor.

De Vera also administers Mayor Jose Yap Jr.’s Tourism and Environment Projects. He is also Local Economic and Investment Promotions Officer (LEIPO). Among his multiple tasks is to pinpoint economic projects that will improve the plight of the populace particularly the farmers, the town being mostly agricultural.

San Jose’s large land area is hilly and mountainous, and vegetation is predominantly grasslands and forest trees with scattered vegetable plantations and fruit trees. In looking for suitable livestock to complement the town’s agricultural produce, de Vera found raising rabbits to be suitable. Capitulo, who had always wanted to put up his own rabbitry, introduced him to Art Veneracion of AVEN Nature’s Farm.

De Vera, together with the staff he appointed to care for the rabbits, attended the Rabbit Production Seminar conducted by Veneracion at AVEN Nature’s Farm. The seminar confirmed that rabbits were relatively easy to care for and could be handled by women and even children. It can thrive on forage, which is readily available in San Jose. The animal only needs a small space; is relatively odorless; and very quiet, making it suitable for rabbitries to be located even in residential communities.

Rabbits can be butchered at home, so their protein will be readily available to the farmers’ families. The meat will just be enough for the day’s meals, and a refrigerator will not be needed to store excess meat. A diet featuring its nutritious meat will certainly help lead to a healthier populace.

In addition, the rabbit is the most environment friendly livestock, with the least gas emissions and smallest carbon footprint compared to other livestock. It can provide the farmer with prime fertilizer with its cold manure, which can be used even without drying. It will also complement the town’s vermiculture project, as rabbit manure provides good feed for the African Night Crawlers (ANC).

With these advantages in mind, de Vera presented the rabbit project proposal to the EMB. The Bureau found merit in the proposal and decided to fund the pilot “rabbit project.” They found it interesting that this livestock could be used as an innovative component in the town’s Materials Recovery Facility (MRF). Foundation stock was immediately procured from AVEN Nature’s Farm and the rabbitry housing was built at the back of the MRF, near the town’s wet market.

The vegetable discards from the market can be utilized as feed for the rabbits, while the rabbits will be housed in cages on top of vermicomposting bins, where the ANCs will feed on the rabbit manure. De Vera also had the open area near the MRF planted with dragon fruit. This will serve as a demonstration site for growing dragon fruits organically using rabbit manure as fertilizer.

Other local government agencies, including the Commission on Audit (COA) are also interested to see the project and are looking into adopting it on a larger scale. De Vera is very enthusiastic about the rabbit project and finds caring for the rabbits to be a stress reliever. He even brings his family to the community rabbitry on weekends for family bonding. His three children, aged 10-14, enjoy feeding the rabbits and do not find that the town is not wanting in infrastructure development, and is fast moving from being a sleepy town to a progressive one. San Jose is directly benefiting from Tourism Road Projects, with national roads in the area currently undergoing road reblocking and widening.

Being the site of Monasterio de Tarlac, located in Barangay Lubigan, the town has become a favorite agritourism destination for tourists from adjacent towns and nearby provinces. San Jose is rapidly becoming a haven for adventure seekers, sports enthusiasts, and nature lovers.

De Vera is optimistic that the demand for rabbit meat will increase with the increased tourist arrivals in San Jose. He sees the rabbit dishes as culinary attractions for tourists in addition to agritourism. With everything falling into place, the rabbit will certainly play a role in the town’s progression from a third class to a second class municipality.