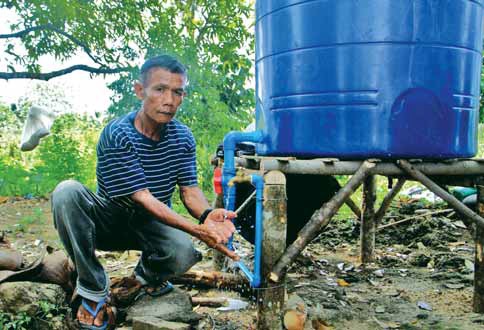 In a remote, waterless, and powerless barangay of Kabankalan City in Negros Occidental, a techno-forestry project was launched with the intent of providing livelihood opportunities for a farmer.

The project was realized following an agreement made between the Central Philippines State University (CPSU) in Kabankalan City; the Ecological and Agricultural Development Foundation, Inc. (Eco-Agri) in Bacolod City, which was represented by R.U. Foundry and Machine Shop Corporation (RUFMSC) chairman-of-the-board Ramon Uy Sr.; and farmer Nestor Obejero of Sitio Cabugan in Barangay Tagukon, a remote community in Kabankalan City.

According to CPSU professor Aladino Moraca, the objective of the project is to provide opportunities to deserving farmers who have shown dedication in the promotion and practice of organic farming and biodiversity conservation. Since Obejero has been observed to have the ability to lead community organizations, and has influenced the other farmers to adopt his organic farming practices, he was chosen as the first beneficiary of the project.

“This is a simple transfer of technology to the targeted farmers regarding coconut oil processing, natural muscovado sugar production, and processing of other farm products, which is part of the advocacy of CPSU, particularly its College of Agriculture and Enterprise Development Unit, to provide technical support in the development of Organic Farming and Agritourism, adopting the Climate Smart Agriculture Practices,” Moraca explained.

The implementation of projects similar to this techno-forestry initiative is expected to help the residents of other remote communities become productive and encourge them to make their operations sustainable. Moraca says that this is actually a trade-off in the sense that Obejero is committed to conserve and maintain at least a hectare of forest patch in the surrounding area where spring sources are available.

Aside from the solar facility and water collection system, Obejero, together with the other members of his family, also received coaching on how to produce organic muscovado sugar, and on extracting cooking oil from coconuts. Moraca says that with these simple lessons, Obejero’s family will have the chance to save their hard-earned resources by removing the need to buy commercially produced cooking oil and sugar.

Moraca said that the CPSU partnered with Eco-Agri due to its shared objectives and the company’s expertise in implementing organic agriculture and community programs and projects, adding that Eco-Agri’s advocacy can be a worthwhile project which can be replicated in other communities in partnership with academic institutions like CPSU.

It was learned that Eco-Agri, through RUFMSC, was tapped in the implementation of the techno-forestry project particularly due to its competency in the installation of solar home systems, and rainwater collectors being among its services to alleviate poverty in the countryside.

For his part, Obejero expressed his gratitude for the project where he was chosen as the first beneficiary in his remote community. He shared that the power generated from the solar system provides the electricity needed to light their home at night, which helps their children study.

Obejero said this during a simple turnover ceremony which was recently held at the community’s small multi-purpose hall that was attended by local residents, students of the CPSU’s Agribusiness, Crop Science, and Sugar Technology departments, representatives from the Office of the Provincial Agriculturist, Multi-Sectoral Alliance for Development-Negros (MUADNegros) which was represented by its executive director Reynic Alo, and other local and barangay officials.

Following the turnover ceremony, a demonstration of the actual cooking and processing of coconut oil was done, followed by another demonstration of the making of natural muscovado sugar and powdered turmeric production for the benefit of Obejero’s family and some members of the remote community.

The CPSU will be providing scholarship grants to Obejero’s children to help them complete their college education.