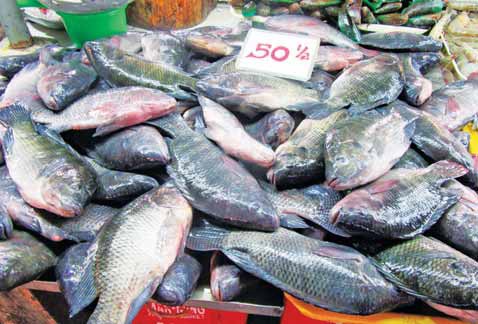 Recently, we attended a tilapia stakeholders consultative meeting in Talisay, Batangas convened by a major aquafeeds supplier and attended by more than a hundred fishcage operators, hatchery owners, traders, and aquaculture experts.

Santeh Feeds, which organized the consultative forum, aimed to raise the awareness of fish farmers on the importance of cage stocking schedules as a means of avoiding problems in marketing that often lead to volatility in prices.

When the fishcage operators stock their cages all at the same time, it could mean a glut in the market that can lead to low market price. It could also be the other way around; when there is a shortage in supply, the price could increase tremendously, in which case, only those who have the supply reap the benefits. And the consumers have to pay a high price for what they buy.

At the time of the consultative meeting, the price of tilapia was quite low, only about P74 per kilo (kg) ex-farm. The operators were not really losing money on it, but then it was a far cry from the high price of P94/kg that they got during most parts of 2017, according to Danny Cabrera, area sales marketing manager for Luzon of Santeh Feeds. Of course the tilapia farmers were not very happy at the time of the forum.

Cabrera also observed a very different marketing practice over the last few years. He explained that since three years ago, the traders insisted on buying live tilapia so often so that today, about 90 percent of the fish is bought live. Before that, it was the reverse. Some 10 years ago, 90 percent were chilled.

There is some problem here, especially on the part of the fishcage operators. Marketing live tilapia is not as simple as selling chilled tilapia. In earlier years, after harvesting the fish, putting them in plastic boxes, and then applying ice, they were shipped to the major markets. Today, because the traders are demanding live tilapia, some of the farmers don’t have the capability to ship big volumes of live fish.

Normally, Cabrera explained, the live tilapia are purchased at about PhP 10/kg higher than the chilled fish. But then, cage operators could not sell the same volume if they were to sell live tilapia. In the Teresa (Rizal) market that we surveyed, the chilled tilapia that weighed three pieces to a kilo was selling for P100/kg while the live ones were priced at P130/kg.

No ‘Bagsakan’ at Taal Lake

One problem, according to Cabrera, is that while there is a big production of tilapia and bangus in the lake, there is no “bagsakan” or trading post (consignacion) in the area where the operators can bring their harvests. That means the traders can dictate the price they want to pay.

Figures from the Bureau of Statistics reveal that 80,000 metric tons (mt) of tilapia and bangus are produced in Taal Lake each year, and 70 percent of that is tilapia.

So much tilapia can be produced in a very limited space. For instance, have you ever imagined that a cage that is 10 meters (m) by 10 m with a depth of 10 m can yield as much as 30 t of tilapia in three to four months?

The biggest expense in tilapia production in cages is the feed. For one growing cycle of 200,000 fingerlings in a cage, total cost or feeds consumed is about P1,350,000. Other expenses are not that much. The next biggest expense is the cost of fingerlings which is usually about P54,000.

The usual arrangement is that the owner of the cages works with a caretaker who is not paid a salary but will have a share of the net income. Some caretakers may manage only one cage. But a fellow we met was taking care of three cages. The caretaker takes charge of feeding, which can be several times throughout the day. He takes charge of security, maintains the cages, and observes developments like occurrence of fishkills and other problems.

As per the experience of the caretaker, he can have a share of R200,000 from one cage on the average, unless a calamity like a massive fishkill happens, or a strong typhoon ravages the cages.

No Hatchery in Taal

While a lot of fingerlings are needed by the tilapia cage farmers in Taal, there is no hatchery in the area that could ideally supply their requirements. Many of the operators buy their fry and fingerlings from Laguna, Pampanga, Bicol, and elsewhere.

One suggestion we got from a knowledgeable attendee at the forum is that it would pay if the operators could form a cooperative that would put up a hatchery, making sure that they use superior breeders. Another suggestion was this: If they cannot put up a hatchery of their own, it would be wise if an entrepreneur or a group of individuals can put up a facility where they can culture the fry from reliable hatcheries and grow them into bigger sizes.

Stocking the cages with bigger fingerlings has its advantages. There is a higher percentage of survival. Another advantage is that the growout period would be shorter and the tilapia crop would have a shorter period of exposure to possible bad weather.

The operator of the facility that grows the fry into big fingerlings can make money, too.

It could be a high-paying business because 100,000 fry only cost about P4,000. If he or she can grow a big percentage of the fry into fingerlings to sell for P3-5 or even higher apiece, that would be very profitable. What is needed is a knowledgeable operator who knows the ins and outs of the business.

At the forum, we got some insights on hatcher operation from a husband and wife who run a four-hectare tilapia hatchery in Calauan, Laguna. They are Mario and Normita de la Rueda, former OFWs.

Normita, who worked as a caregiver in Israel for 1.5 years more than 20 years ago, swears it is very much better running your own business in the Philippines than going abroad to work. In Israel, she was paid P25,000 a month. Today, there is the potential for making millions of pesos in just one month.

The couple started their project in 1998 by converting a four-hectare rice field into tilapia breeding ponds. Today, they take care of 60,000 breeders which spawn every month. They produce about 3 million fingerlings that sell for P4-5 apiece and millions more of newly hatched fry (1 to 2 days old) which fetch P4,000 per 100,000. It takes only 500 breeders to produce 100,000 fry.

The couple has mastered fry and fingerling production as hands-on operators through the years. They are multiplying the Excel tilapia because this is a fast grower. We learned that each tilapia breeder remains productive for 18 months. Every month, it spawns, producing thousands of fry each time. After spawning, the breeders are confined in hapa nets for three days for conditioning while the pond is being drained. When the pond is refilled with new water, 1,000 female breeders and 200 males are stocked together in one place.

Female breeders are selected from stocks that are Size 9-10, which are about 4 to 5 months old from fry stage. These cost R2.75 each. In one month, they will start spawning and will do so every month for one-and-a-half years.

The De la Rueda couple sell their fry and fingerlings not only to the fishcage operators in Taal but in many other places. They have found running a tilapia hatchery to be many times more lucrative than being overseas Filipino workers.