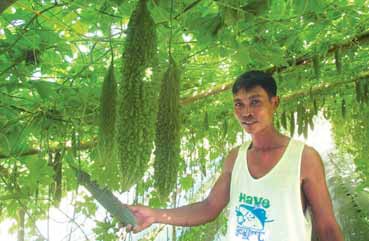 Ral Miguel of Altavas, Aklan was a carpenter before he got interested in farming. He had a friend who encouraged him to plant vegetables rather than doing contractual jobs, which Miguel thought was only a seasonal job. He was not against his friend’s idea but he thought that carpentry and farming were both important, and could be done at the same time with hard work and dedication.

As he had a small plot of land, he saw an opportunity and decided to use it for agricultural purposes. He tried planting different batches of Pai Tsai, thinking that it was a short-term crop and easy to begin with. It wasn’t long before he started earning money from his plants. According to Miguel, the first time he tried farming and the satisfaction he got from it could not be found anywhere else, since his plants also helped provide food for his family and an extra source of income.

For a couple of months, he enjoyed his Pai Tsai produce, then became interested in bitter gourd after meeting Known You Seed Philippines marketing technician Eduardo Dinero. Miguel was somewhat familiar with the variety called Jadeite since he had been reading some articles and had heard good news about it. He started planting it in a 200 square meter area with a capital of PhP4,000 for his trellises, Jadeite seeds, and other inputs.

Because Dinero had told Miguel about the variety’s unique features, the latter was hopeful that it would yield better and give him more income than regular types of bitter gourd. During his bitter gourd’s vegetative stage, he was amazed by how strong and vigorous the variety was despite the sudden changes of weather in his area. As he now spent most of his days in the field, Miguel observed that the fruits of Jadeite Bitter Gourd were different and odd-looking compared to what he saw in the market. He then had doubts; would he have a hard time selling them due to their appearance?

During the harvest of his Jadeite fruits, Miguel was amazed by how big and heavy they were, with a length of about 28-30 cm and 6.5 cm in diameter, weighing around 450-500 grams per fruit. With a very dark green and shiny skin that looked very fresh, he became confident about bringing his first 20 kg of fresh produce to friends, neighbors, and the market. He sold these quickly, and a few days later, people are asking for more, finding they liked Jadeite’s less bitter taste and crisp texture, good for ensaladas and frying.

To this day, Miguel continues to plant Jadeite in different batches so that he can provide the market with a continuous supply. He is now able to bring 50 kg of Jadeite ampalaya with three days’ interval to his regulars in the market and his neighborhood. The farmgate price of his Jadeite is P70 per kilogram, higher than the usual.

Miguel now says that he will not give up farming and will continue to explore farming as long as he can.

Crops you can share: Top producing fruits and vegetables

Steps of small farmers can lead to bigger changes