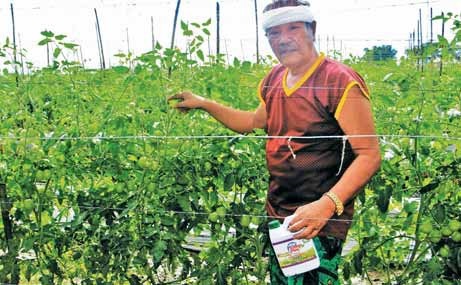 When they are equipped with proper and practical knowledge and the right farm inputs, even ordinary farmers can succeed at what they do.

Just like Boyet Salinas of Barangay Kaingin in San Rafael, Bulacan, who benefited from the use of Amino Plus Foliar Fertilizer (APFF), which is processed from fish and contains compounds that promote plant growth.

According to Salinas, the APFF really improved his tomato plantation after it was applied. As a first-time user of APFF, he says that he saw how the tomato plants on his 3,500-square-meter farmland improved. Following the improvement, he says he expects an increase of more than 20 percent from his usual harvest of about 500 kilos per day.

The increase is significant because the input is very affordable and beneficial, not only for his crop, but also for the environment because it is certified organic by the OCCP or the Organic Certification Center of the Philippines.

Salinas added that his tomato plants that were treated with APFF became very green and robust, and started to bear fruits earlier. APFF contains effective microorganisms that provide long-term beneficial effects on the physical, chemical, and biological condition of the soil.

NPK (nitrogen or N, phosphorous or P, and potassium or K)—a popular plant input—alone cannot offer an all-in-one solution to plant nutrition and can become detrimental when supplied in excessive amounts. This is where amino acids come in. They are the building blocks of protein, which are needed by the plant, like all other living organisms. The amino acids contained in APFF can provide benefits that are not supplied by NPK alone.

Aside from Salinas, other farmers in Bulacan who were approached and assisted by the manufacturers of APFF reported positive observations after applying APFF to their crops. This includes Mary Ann Alcantara, also of San Rafael in Bulacan, who said that it helped increase her eggplant harvest by about 30 percent.

Because the input does not contain toxic or carcinogenic materials, it is a good source of fertilizer, and the use of APFF does not involve heating, which prevents denaturation of proteins and retains valuable amino acids, vitamins, and natural oil. It effectively adheres to a plant’s surface and can provide quick supplementation.

For best results, it is recommended that APFF be applied early in the morning or late in the afternoon. For fruiting vegetables like the tomato plants of Salinas, APFF can be applied once a week or once every two weeks during the vegetative stage, and during the fruiting stage, APFF should be applied every after harvest.

These farmers were assisted by qualified farm technicians of Global Green Organic Fertilizer, Inc. (GGOFI) in growing their crops. GGOFI is the manufacturer and distributor of APFF, and the input itself was introduced to Salinas by Bernie Villaceran of GGOFI. Villaceran said that the dramatic results Salinas achieved were due to the high L-Amino acid content of APFF, which is easily absorbed by the plants. The GGOFI, through its farm technicians, has been assisting the farmers by guiding them with the right techniques and practical procedures to increase their yield and income from cultivating their crops.

Cactus vs. succulent: What’s the difference?

Study shows that having plants in your workplace is healthy