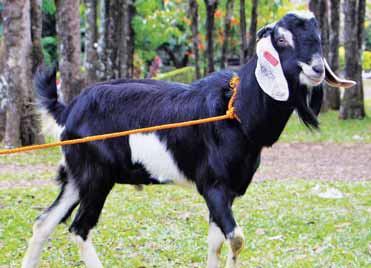 The first ever “Kawayan ug Kanding FIESTA” was recently hosted by the Northern Mindanao Consortium for Agriculture, Aquatic and Natural Resources Research and Development (NOMCAARRD) at the Central Mindanao University (CMU) in Musuan, Maramag, Bukidnon.

The Farm-Industry Encounters through the Science and Technology Agenda (FIESTA), which is
initiated and funded by the Philippine Council for Agriculture, Aquatic and Natural Resources
Research and Development of the Department of Science and Technology (DOST-PCAARRD),
is a technology diffusion platform. According to PCAARRD’s Applied Communication Division
director Marita A. Carlos, who represented PCAARRD acting executive director Reynaldo V. Ebora during the event, FIESTA is a PCAARRD eventbased technology transfer modality that aims to promote science and technology (S&T) and its products in order to provide competitive and profitable business ventures for micro, small, and medium enterprises (MSMEs) in the
agriculture, aquatic, and natural resources sectors of the country.

The two-day activity specifically featured technologies for improving the country’s bamboo and goat production sectors, thus the tagline, “Kawayan ug Kanding (Bamboo and Goat) FIESTA” was used for the event.

The Boer, a meat-type goat breed which can weigh up to 70 kilograms.

The results of R&D initiatives showcased in the event were within the areas of agriculture, aquatic, and natural resources (AANR), especially those that were funded by the DOST-PCAARRD. Like a typical fiesta, there were also booth exhibits, free processed food tasting, and skills competitions, which included an essay writing contest with Ricardo Argana of PCAARRD’s Applied Communication Division, Mae Morales of the Region 10 office of the Department of Agriculture, and Julio P. Yap Jr. of Agriculture Magazine comprising the board of judges.

Other interesting and innovative value-adding initiatives from NOMCAARRD member institutions were also featured during the two-day event.

During the activity, the new NOMCAARRD logo was launched, while several farmers’ symposia were conducted, which included a forum on goat production technology, smallholder goat-raising from a farmer’s perspective, mushroom production technology, and adlay production and management. Other topics that were tackled included village-level establishment of a bamboo nursery, prospects of engineered bamboo, mitigating soil erosion through bamboo plantation, and organic farming. Several products made out of bamboo were also featured, such as lampshades, toys, and other useful items, gaining the attention of the participants and visitors.

But one of the most interesting topics tackled during the event was about the prospects of the country’s goat industry, which were discussed by Reynaldo L. Intong, a researcher from the CMU’s Department of Animal Science, College of Agriculture. He emphasized that goat raising is a sunrise industry in the country which is slowly but steadily gaining the favor of the investors.

The DOST-PCAARRD likewise underscored the importance of goat production, saying that while 99% of the supply of goat is sourced from backyard raisers, the number of commercial investors has been noted to be increasing since the turn of the millennium.

Based on available data, production now stands at 3.71 million heads as of January 2017, where 98.62 percent or 3.88 million are from the backyard raisers, and 1.38 percent or 0.05 million are from commercial raisers. This relatively small population base can be traced to two basic factors: high slaughter rate and low productivity. Intong says that low productivity stems from lack of knowledge on improved management practices, and lack of access to quality breeders.

That results in long production cycles of more than 9 months, with conception rates as low at 75 percent. The kids also have a high preweaning mortality rate (25 percent), and growth is slow, with weight averaging only 15 kilograms (kg) at market age.

But despite the low production level, the demand for goat meat and milk remains robust, as the number of goats slaughtered has always been higher than kids born alive. At present, farmgate and carcass prices of goat are high—even higher than the price of beef. However, the demand cannot be met, as this would mean slaughtering an average of 1,355 goatsweighing 25 kg per month or 16,262 heads per year. This means that currently, there is much potential in goat production as supply cannot yet meet the demand.

To address these gaps, national goat science and technology (S&T) initiatives were laid down in a holistic way. From 2008 to 2016, about 7 programs on goat production have already been funded by PCAARRD.

All these focused on accelerating enhancements for goat productivity by:
• Improving conception rate of does from 75 percent to 90 percent by 2020;
• Shortening kidding interval from 9 to 8 mos. (increased kidding index from 1.35 to 1.52 kidding/year);
• Decreasing preweaning mortalities from 25 percent to 5 percent by 2020;
• Increasing slaughter weight from 15 kg to 30 kg by 2020;
• Establishing standards for goat slaughtering and cutting by 2015;
• Developing standards for halal goat quality assurance by 2018; and,
• Making available authentic halal goats in Muslim Mindanao by 2019.

Intong recommends two breeds of goats that can be reared by both the backyard raisers and the commercial raisers in the country. These include the Anglo-Nubians for milk production, and the Boer, a meat-type breed which can weigh an average of 70 kilograms.

In general, the event emphasized the importance of applying available technologies which can boost the two featured products—bamboo and goat—and their relevance in helping improve the lives of the farmers in the countryside, and the rural economy as a whole.

Prices of natural rubber will continue to increase