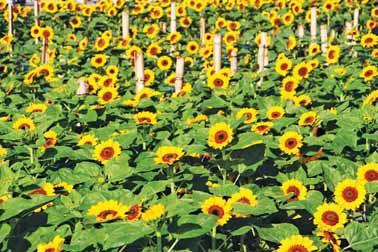 In addition to its yearly tourist attraction of the celebration of the Candle Festival, the municipality of Candelaria in Quezon province now has an emerging tourist destination: the new Girasoles Farm located in Barangay Masin Sur.

It was named “Girasoles,” which means “sunflowers” in English, because it is a sunflower farm that is planted with thousands of sunflowers blooming all year round.

Candelaria is one of the most progressive municipalities in the province, and rapid progress has been made since the 1990s due to the different commercial establishments built around the town, like retail outlets, supermarkets, hardware stores, fastfood chains, shopping centers, and now, the Girasoles Farm.

Mavivian always finds time to go around the farm to be with her blooming sunflowers.

According Rudy Dean and his wife Mavivian, the owners of Girasoles, they decided to convert the once idle 1-hectare farmland into a blooming flower farm as their modest contribution to the town in terms of establishing a new tourist destination in the area. With Rudy’s expertise in ornamental plants and vegetables—earned as an area sales manager of Allied Botanical Corporation (ABC)—and Mavivian’s passion for cultivating flowering plants, Girasoles Farm was born.

While she is a midwife by profession, Mavivian chose to pursue her love for plants and flowers, so they decided to develop the idle land and turn it into a field that is full of vibrant colors, shapes, and textures. For his part, Rudy wants to prove to farmers and agripreneurs the quality of the products that he has been offering, such as seeds of ornamental plants and vegetables, and the farm inputs which ABC distributes in the country.

At Girasoles, they have different varieties of sunflowers that bloom all year-round, together with other annual flowering plants, high-value crops, and even different varieties of watermelons. Visitors and tourists can even learn how to cultivate sunflowers from the husband-and-wife team, who are eager to share their knowledge about farming. This makes Girasoles Farm no mere tourist destination; it can also be an outdoor farm school where enthusiasts can learn something from their visit.

A late afternoon scene at the Girasoles Farm where the warm beauty of the sunset can be enjoyed.

Since its opening early this year, Girasoles Farm has already attracted thousands of visitors coming not only from the surrounding areas but as well as from other municipalities in the region, including visitors coming from urban areas like Metro Manila.

The farm is very accessible due to the three major highways that pass throughout Candelaria town proper. There is the Candelaria Bypass Road (also known as the Candelaria Diversion Road), which serves as an alternative road for commuters coming from Manila who are on their way to Batangas or the Bicol region. Commuters can also easily reach Girasoles Farm through the provincial buses plying the Metro Manila and Lucena City routes that stop at the town’s designated bus stops, where the passengers can take a tricycle going to Barangay Masin Sur where the sunflower farm is located. Candelaria is just about 107 kilometers from Manila, and barely 23 kilometers from Lucena City.

Aside from the very attractive varieties of sunflowers such as Vincents Choice and Vincents Fresh, which are very ideal for “selfies,” other equally attractive varieties of flowers that can be seen in Girasoles Farm, including Zinnia Profusion Double Mix, Celosia Plumosa Century, Coleus Fairway, Cosmos, Marigold, Torenia, and Vinca, among many other varieties of annuals. Cut flowers are always available for visitors who would like to buy “pasalubongs” for loved ones and friends.

There are also locally-made processed delicacies and other interesting items which are on display near the reception area of the sunflower farm.

Here are few tips from Rudy on how to cultivate your own sunflowers in case you want to plant it in your garden:

With Rudy Dean’s invaluable information, you can expect to have a blooming sunflower garden in your own home or farm.

Dean checks the quality of the sunflowers.

Aside from creating an alternative tourist destination, Girasoles Farm has also been providing employment opportunities for the local community, like the tricycle drivers who are ferrying commuters from the poblacion, the households which have been producing local delicacies, and the local industries whose products are being sold at the sunflower farm.

The entrance fee to the farm is just P30. For that, you can be at one with nature, explore the unique “Sunflower Maze” of the farm, feel the fresh air, and have quality time with your loved ones and friends.