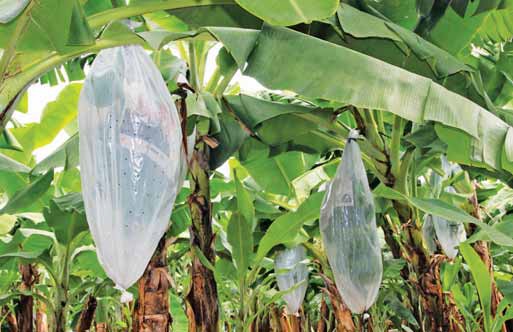 Banana remains one of the most popular fruits because it is available fresh all year-round and is much cheaper compared to other tropical fruits.

They are classified either as dessert bananas or as green cooking bananas. It can be a delicious addition to fruit salads or peeled and eaten as it is. According to the Food and Nutrition Research Institute of the Department of Science and Technology (DOST-FNRI), banana is a good source of fiber, vitamin C, and potassium.

Potassium is a mineral which is important for controlling the body’s fluid balance. It is also needed for muscle contraction, transmission of nerve impulses, and the proper functioning of the heart and kidneys. Potassium helps regulate water balance and blood pressure in cells, together with other minerals like sodium, calcium, and magnesium. Bananas in general contain 400 milligrams of potassium. Most individuals receive approximately 2,000 to 3,000 milligrams of potassium from various foods.

Banana remains one of the most popular fruits because it is readily available and much cheaper compared to other tropical fruits.The Cavendish variety in particular requires intensive labor and better inputs to grow to a profitable volume.

They are also rich in vitamins A, C, K, and B6, and in fiber and magnesium. Lack of vitamin B6 in the diet can cause weakness, irritability, and insomnia. Considering these great health benefits, the banana is truly a wonderful and delicious fruit, and affordable too.

The FNRI explained that the banana is the most unique fruit because it does not come from trees, but from large plants that are giant herbs related to the lily and orchid families.

The volume of production of banana in the country went up by 3.1 percent from 2.33 million metric tons (mt) for the period October to December 2016 to 2.41 million mt during the same period of 2017, based on data from the Philippine Statistics Authority (PSA).

The increase can be attributed to additional bearing hills from the expansion areas of established banana plantations due to the increasing demand, and bigger sizes of fruits developed as a result of fewer weather disturbances in some banana producing areas.

Davao Region was the biggest contributor to total production with 37.4 percent or 901.53 thousand mt, followed by Northern Mindanao with 20.2 percent, and SOCCSKSARGEN (South Cotabato, Cotabato, Sultan Kudarat, Sarangani, and General Santos City) with 13.5 percent. Data also showed that more than half or 51.4 percent of the total production of banana was of the Cavendish variety.

The increase in production can also be attributed to the bigger bunches harvested from the banana farms which have applied technologies and better inputs to improve their production. One such group that applied new inputs and technologies to their plantations is the Manuel Guianga Multi-Purpose Cooperative (MGMPC) in Tugbok, Davao City.

Banana, particularly the Cavendish variety, requires intensive labor and better inputs to grow to a profitable volume. Erratic weather conditions, like the El Niño and La Niña phenomenona, affected the growth of banana plants, causing the yellowing of leaves. This causes production losses and deterioration of the banana plants, leading to poor quality of the fruit. To address the concern, the group used Amino Plus Foliar Fertilizer or APFF.

The application of APFF was done on a weekly basis during normal weather conditions, and every 15 days during the rainy days. During the dry periods, they cannot apply ground support to their plantation, which requires the application of foliar fertilizers. In the six months of the dry season, plants were able to survive the harsh weather, which resulted in the better condition of the banana leaves and the plant growth itself. This also helped the banana plants become sturdier, and they eventually produced bigger banana bunches. On the recovery side, they were able to attain between 30 and 40 percent.

Banana farmers have to be extra careful to maintain the quality of their produce, where the work begins from land preparation to planting of the bulbs, protecting the banana bunches from the effects of strong wind and pest infestations, including extreme weather conditions.

For the proportions of input applicationfor ground support, the group uses Suzuki organic fertilizer (about 60 percent) in tandem with APFF (25 percent).

For every hectare, their plantation can accommodate at least 2,200 banana plants. It was learned that they got a harvest where a box could be filled up to 13.5 kilos each, and the bananas were export quality at that.

But they had to be extra careful to maintain the quality of their produce, where the work begins from land preparation to planting of the bulbs, protecting the banana bunches from the effects of strong winds and pest infestations, including extreme weather conditions. And when harvest time came, the MGMPC workers had to pick, sort, pack, and maintain the quality of the bananas until they reached their export destinations.

Damage to agricultural crops due to weather disturbances can be prevented or minimized with the proper application of farm inputs, like organic fertilizers and other related products. Plants sprayed with APFF are more resistant to diseases and other stresses in the field like drought or flooding. When sprayed, it effectively adheres to the plant’s surface and provides quick supplementation. APFF boosts the growth and productivity of banana plants and other crops like rice, corn, vegetables, fruit trees, and ornamentals.