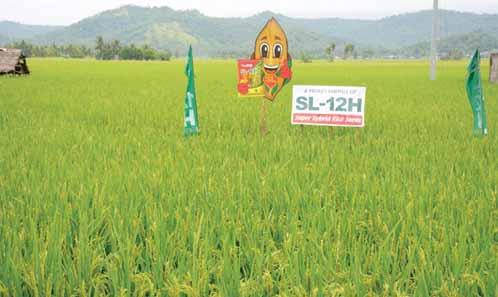 Hybrid rice technology is seen as the most viable option for increasing rice productivity towards a more competitive rice industry, and our long quest for rice self sufficiency. Both public and private sectors are continuosly promoting the benefits of hybrid rice technology. SL Agritech Corp (SLAC), one of the leading hybrid rice companies in the Philippines, is intensifying its information dissemination on hybrid rice technology to reach out to more farmers in the country.

SLAC also conducts different on-ground activies such as field tours and field days in the technology demonstration sites in coordination of local goverments to encourage more farmers to use hybrid rice seeds. Furthermore, SLAC organizes harvest festivals in selected areas in the country.

Recently, a Grand Harvest Festival was celebrated in Brgy. San Pedro Palcarangan,
Lubao, Pampanga to celebrate another bountiful harvest in the entire barangay.

To further extend the knowledge and benefits of hybrid rice technology, the private sector Rice Productivity Advocacy, Inc. (Rice Board) launched the National Rice Technology Forum (Rice Congress) all over the country. Recently, the 6th National Rice Technology Forum was held in Olingan, Dipolog City, Zamboanga del Norte. 3,000 farmers and local extension workers participated. SL Agritech is one of the active members of the Rice Board and an ally of the organization’s mandate.

SLAC advocates helping Filipino farmers and assisting in achieving the country’s rice self-sufficiency by promoting and encouraging the utilization of hybrid rice technology. It is an auxilary of the government in the development of the agricultural sector.