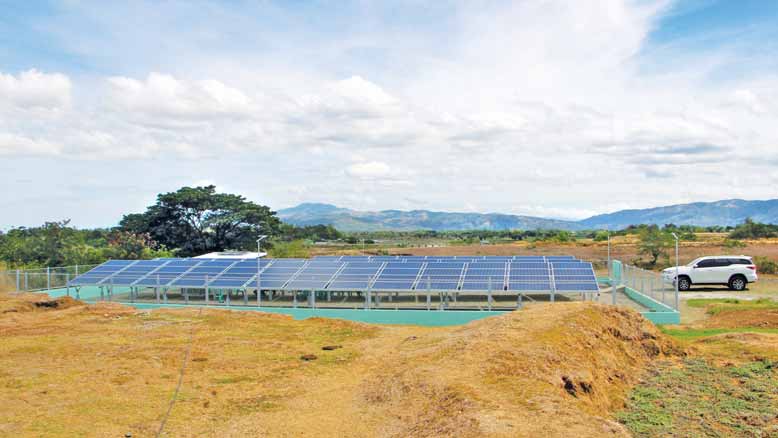 Marginalized farmers in Llanera, Nueva Ecija will have something to be proud of after the Department of Agriculture (DA) implemented the Caridad Norte and Sur Solar Irrigation System in their area, which is believed to be the first and biggest of its kind in Luzon.

The Solar-Powered Irrigation System (SPIS) is a pilot project of the DA Regional Field Office 3 (DA-RFO 3) to enhance and sustain rice production in the highland rainfed areas of the municipality. It was realized through the efforts of DA-RFO 3 Regional Executive Director Roy M. Abaya and DA-RFO 3 Assistant Regional Director for Operations & Extension Crispulo G. Bautista, Jr., and constructed and installed by Bacolod Citybased R.U. Foundry and Machine Shop Corporation (RUFMSC), one of the leading proponents for the development of agricultural mechanization in the country.

Direct beneficiaries under the SPIS are some 125 rice farmers who are members of the Caridad Norte and Sur Irrigators Association or CNSIA.

Access to sufficient irrigation water is the key for many small-scale farmers in order to sustain their livelihoods and attain food security.

The facility is composed of some 140 Lorentz solar panels, a 40-horsepower Lorentz submersible pump, state-of-the-art electronic control devices, a highly-reliable flow meter gauge, concrete storage tank, and irrigation distribution pipelines. The photovoltaic (PV) panels were installed on precision-engineered aluminium frames to withstand extreme weather conditions, which were anchored on dependable concrete posts. The facility draws its water source from a nearby river and pumped to the storage tank for distribution to the nearby farmlands.

With a cost of some PhP 7 million, the solar-powered irrigation facility is expected to supply the water needs to irrigate some 50 to 70 hectares of ricelands, on a rotation basis, in Caridad Norte and Caridad Sur, which formerly depended on rainwater only.

In areas like these two barangays, solarpowered irrigation facilities are increasingly and continuously in demand in order to provide a cost-effective and practical solution to boost agricultural productivity. Access to irrigation water is the key for many small scale farmers in order to sustain their livelihoods and attain food security.

As part of its advocacy of promoting agricultural development, RUFMSC, under its chairman of the board Ramon Uy, Sr., provided additional improvements—at no extra cost to the government—to the project to enhance the solar facility’s performance. The facility was completed on time through the concerted efforts of project engineer Fred Lista, and civil works engineer Marvin Gonzaga, both of RUFMSC and Ecological and Agricultural Development Foundation, Inc. (Eco-Agri).

In most agricultural areas of the country, particularly those in the countryside, the availability of irrigation water depends mostly on monsoon rains or power needed to operate water pumps. Due to a lack of electricity, diesel-operated water pumps are usually used to pump water for irrigation purposes. However, the use of diesel-powered engines has several disadvantages like the ever-increasing prices of fuel which will directly affect the economic success of the farmers, and of course, its effect on the environment. It can be therefore noted that renewable energy options, particularly solar power, is a very promising solution to help attain sustainable agriculture in the countryside.

Marvin Gonzaga while inspecting the pipeline leading to the solar-powered irrigation facility.

For his part, Lista, project engineer of RUFMSC, says the reliability of the SPIS in Llanera is backed by their experience in installing other similar facilities in the country that taught them what is needed to design reliable solar-powered facilities using German technology-based Lorentz equipment and supplies. “We choose the right materials and production techniques to give the facilities we construct a longer life, even in the most difficult weather conditions. Through the use of Lorentz solar pumping systems, we can help transform unproductive land into productive farms and eventually improve the yields from existing crops.”

As this developed, CNSIA chairman Roger Bautista expressed gratitude for the awarding the useful project to them, which materialized through the efforts of the DA-RFO 3. “We thank the Department of Agriculture headed by Secretary Manny Piñol because we can now have a second cropping. If there is no irrigation, we will have no income and this solar pump is a big help to us since we will not be using diesel anymore.”

After all, providing water to locations that do not have any existing infrastructure is practically improving food security and helping the rural farmers to generate substantial income for their families and their respective communities. It is therefore timely to consider the advantages and practicality of solar-powered irrigation systems in order to promote development in the countryside.

Solar-powered irrigation systems are designed to help farmers in the remote areas to irrigate their farmland, which will eventually increase their production during the dry months. This will result in the increase of the farmers’ income, and enable them to save on fuel costs. They can also enable farmers to shift from expensive and pollution-causing diesel-powered pumps towards sustainable and efficient water source.

Aside from providing water for irrigation purposes, the system can also be used to supply water to hard to reach communities, which farmers can use to venture into livestock raising and vegetable gardening.

Environment-friendly facilities will make the agricultural communities a better place to live while helping farmers become more productive and self-reliant.

6th Moringa Congress promotes malunggay as a solution to malnutrition