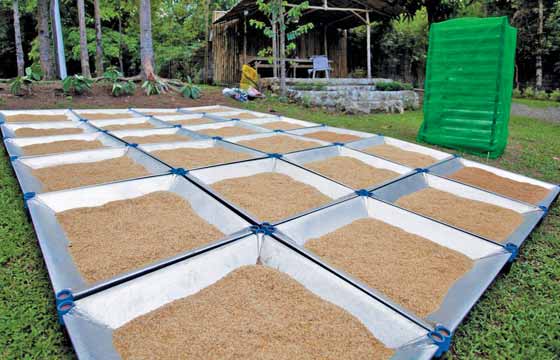 The traditional method of drying palay on the pavements of national highways and roads has continuously placed the safety of motorists as well as passengers at risk, not to mention the post-harvest losses amounting to billions of pesos due to this old and wasteful drying process.

In his effort to alleviate these perennial problems, Francisco “Popoy” Pagayon has invented a portable multi-purpose post-harvest solar speed-drying thermal tray which he called “Portasol.” He says that this will eradicate the perennial problem and will provide fast, safe, and clean solar dryers on any ground away from national highways and roads.

“Traditional drying is still being resorted to by the farmers in the countryside because the usual post-harvest solar dryers, which are mere cement slabs, are regularly turned into basketball courts or used for other purposes,” Pagayon stressed.

It can be recalled that even the Department of Public Works and Highways (DPWH) has banned the drying of palay and other farm produce along national highways under Department Order No. 41, Series of 2013. The order says that in order to safeguard the motorists from any untoward accident, it is unlawful for any person to use any portion of a right-of-way, or to convert any part of a public highway, bridge, wharf, or trail for his own private use.

According to Pagayon, his invention is a very simple solution to an old problem and an immediate response to the need of most Filipino farmers to have a simple, easy, more effective, and indigenous dryer that is expected to put an end to the country’s persistent post-harvest losses.

Pagayon, president of the Filipino Inventors Society Producers Cooperative (FISPC), says that Portasol is expected to entirely revolutionize the post-harvest system through a practical and affordable yet effective and efficient method. Compared to the traditional way of drying palay on road pavements and other multi-purpose concrete slabs in the countryside, the Portasol tray drying system is more effective, more efficient and reliable, and apparently two to three times faster.

He says considerable ease and convenience can be achieved in collecting, re-sacking, and storing dried grains. “Satisfactory drying quality is obtainable even if the trays are stacked five to 10 tiers high, although drying time in this case is almost twice as long and is recommended only when space is limited.”

The tray drying system is said to be more effective, more efficient and reliable, and apparently two to three times faster.

Aside from drying palay, Pagayon says that his invention is practical and convertible, which can also be used in drying corn, beans, vegetables, fruits, and even fish. Portasol can also prevent pest infestations, and allow storage ventilation by providing the necessary breathing space between multi-tiers of stored grains to avoid mold, rot, and mildew spoilage. “Portasol is designed for…Filipino farmers. This can increase the farmer’s income, and eventually [help them] become…better [farmers],” he says.

As an indication of confidence in the invention of Pagayon, even the Department of Science and Technology (DOST) has tapped the use of Portasol to help the small fisherfolk living along the coastal area of Uyugan town in Batanes. According to DOST Region 2 Director Sancho Mabborang, the invention of Pagayon is expected to help the small fishermen to increase the production of their native dried flying fish which they call ‘dibang’. “Portasol would allow the efficient and also a sanitary way of drying the dibang in multiple trays and not the same way as before when they dried it on streets and other wide cement surfaces around the town.”

It was learned that the DOST in Region 2 provided at least two sets of Portasol trays, including a vacuum packaging machine and packaging materials worth some P500,000 under the DOST’s Community Empowerment Through Science and Technology.

Following this development, DOST Secretary Fortunato de la Peña has also endorsed Portasol as a solar drying option for the different crops and products in the regions, which can put an end to vehicular accidents caused by roadside palay and corn drying.