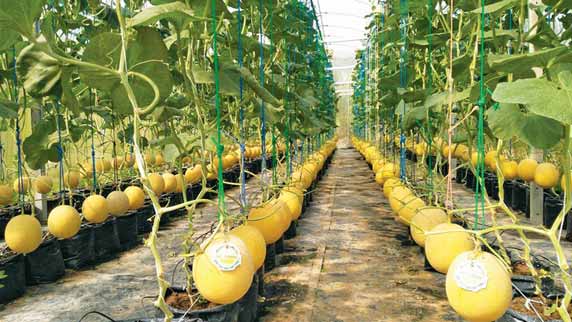 Panu Taweepon, 37, is a happy bachelor who grows melons in his small farm in Surat Thani province, some 500 kilometers south of Bangkok. His NF Farm (New Farmer Farm) is just 3,200 square meters (two rai) but his income from this small parcel could be much more than a rice farmer cultivating several hectares can make.

In his small farm, he has several greenhouses each measuring just about 60 square meters. Do you know how much he makes from each greenhouse every growing cycle of about three months? From one greenhouse, he harvests 500 marketable fruits, each weighing at least two kilos. That means he can harvest one ton from that little space. At 100 baht per kilo, that’s worth 100,000 baht or about P161,000 in Philippine money. In one year, he can grow three crops so that’s a gross of nearly half a million Philippine pesos just from one greenhouse.

We met Panu at the SIMA-ASEAN Agribusiness Exhibition in Bangkok held on June 6-8, 2018 at the Impact Exhibition Center. He showcased a prototype of his greenhouse where he grows his melons.

Sample of Panu’s melons for sale at 100 baht per kilo. One fruit is usually two kilos.

What’s interesting is that he operates his NF Farm by himself with the occasional help of his mother when he is away. That’s not difficult for his mother to look after the farm because the plants under greenhouse are drip-irrigated, so watering and fertilization are done by simply opening a valve.

At the trade show, Panu’s video of his melons was played nonstop which attracted many visitors. It is the same video that he posted on his Facebook account which has been attracting buyers of his high-quality melon fruits nationwide. Panu said that he sells most of his harvest to buyers who have seen his video on Facebook.

Panu said that he sells his fruits throughout Thailand. He sends them by express courier. “If you order and I ship today, you will receive your fruits the next day,” he said. There’s no minimum order required. If the customer orders just one, that’s fine. The buyer will only have to pay the courier’s fee.

One typical order is five fruits in a box weighing about 12 kilos (some fruits weigh more than two kilos). The total cost, including shipping, is 1,450 baht or P2,334.50 in Philippine money.

Really, social media has revolutionized the marketing of farm produce. Panu Taweepon lives in a place that is far away from Bangkok, yet he is able to sell his harvest with the help of his Facebook account which is free.

We gathered that Panu’s little farm has become famous because of his beautiful melons. Visitors are welcome but if you want to visit, you will have to reserve one month in advance. Too many visitors at one time could disrupt his work in his little farm.

There are important lessons that can be learned here for local agripreneurs. It means that even if you have a very small farm, you can maximize income if you can grow the right product or products for the right target market. The important thing is that you have a thorough knowledge of how to grow and market the product you have chosen to specialize in.

Taweepon (right) and Zac B. Sarian inside Panu’s greenhouse at the trade show.

The oft-repeated saying that “Small Is Beautiful” is once again demonstrated by Panu Taweepon. A small farm is easier to manage, especially if you have modern facilities like drip irrigation, greenhouses for year-round production, techniques of balanced fertilization either with organic or non-organic fertilizers.

By the way, Arsenio “Toto” Barcelona of Harbest Agribusiness, one of the hosted visitors at the trade show, is now duplicating the technique of Panu in growing his melons. Toto has already set up his growing system complete with all the necessary facilities in growing his crop at the roofdeck of his new building in Taytay, Rizal. The area is very spacious and Toto will also grow many other things in his rooftop garden. He will be growing tropical strawberry, vine crops like cucumber in the middle of an above floor planting bed, and leafy greens like lettuce and others at the side to maximize production in every space. The idea, he said, was conceived by his son Julius, an Ateneo graduate who is very much involved now in running Harbest Agribusiness with his father. Many of his relatives call him Julius the farmer.

While Toto Barcelona is interested in Panu’s technique of growing his melons, Eugene Gabriel, one of the SIMA-hosted attendees, is very much interested in the Enerossi Silage Mower showcased at the trade show.

This is the dream machine he has been looking for that can facilitate faster commercial production of silage in the Philippines. His company, Right Agri has collaborated with Dr. Ronaldo Sumaoang of Novatech Food Industries in the commercial production of affordable silage for livestock that include dairy and beef cattle, goats, sheep and buffaloes. They are already producing silage for clients but the production is not fast enough to meet the big demand. Aside from the usual silage, they are also producing TMR or Total Mix Ration which is silage enriched with enzymes and beneficial microbes that enhance digestibility of the feed.

The Enerossi Silage Mower can help lower the cost of production because the machine can harvest the forage crop which it simultaneously shreds. The silage crops could include Pakchong 1 (Super Napier), corn, sorghum, sugarcane, King grass and others.

What is usually done at present in the Philippines is that farm workers harvest the standing crop manually and then feed the same to a shredder. The cutting of the corn or napier is very expensive when done manually. It is not as fast as when a machine like the silage mower is used.

The Enerossi Silage Mower is a durable and strong self-loading mower, perfect for the forage crops mentioned above. It comes with a shaft drive, equipped with a system to sharpen knives. The machine has 12 standard knives on the cutter disc and six ventilation flaps for the cut product. It is also equipped with a gear set for adjusting the cutter discs for eight different sizes of the shredded material.

Availability of affordable silage to Filipino farmers can really help increase the livestock population in the Philippines. Today, thousands of backyard farmers raise only one or two cows because they don’t have enough feed for their animals during the dry months when green grass is scarce. With affordable silage, they could raise more cows and other ruminants.

Another exhibit that fascinated the trade show visitors was the video of a handtractor puddling the field for planting rice without any driver. The machine is being operated by a guy sitting under a tree with the aid of a remote control gadget.

The technology was showcased by a farmers’ cooperative in Thailand. While the technology is not yet fully commercialized, it augurs well for other great ideas being developed for agriculture. Perhaps, the new technologies could attract more young people to get into agribusiness. With gadgets such as the one showcased, farming in the Philippines could be more fun.

Another equipment that fascinated the visitors at the trade show was the drone that can be used for spraying crops in the field like rice, corn, bananas, fruit trees, and many more. The machine could be used to spray foliar fertilizer as well as pesticides.

The drone can spray one hectare in just 10 to 15 minutes.

Do you know how fast it can spray one hectare? It takes just 10 to 15 minutes. Toto Barcelona is already ordering a couple of units which he will use for rental spraying. Gabriel said that he will be buying one for use in Isabela.

It is easy to understand why the Thais really love the late King Bhumibol Adulyadej now known as King Rama IX. At the trade show, a cooperative prominently displayed the King’s portrait in its exhibit booth.

We personally know that King Rama IX had helped Thai cooperatives in a big way in his long years as monarch of Thailand. For instance, the biggest dairy cooperative in Thailand, the Nong Pho Dairy Cooperative, is under Royal Patronage. The King himself put up about half of the capitalization of the cooperative that had a revenue of 1.7 billion baht during our visit about five years ago. He received annual dividends but he gave that to the co-op for the scholarship of farmers’ children, for R&D and extension services.

We also visited his Chitralada project in Bangkok within the 100-hectare palace grounds where a virtual agricultural station has been set up complete with a dairy operation that produces fresh and processed cow’s milk, rice byproducts research (briquettes out of rice hull), many varieties of mushroom, vetiver grass for erosion control and many more.

The co-ops at the trade show displayed various fruits that included mangoes, many varieties of bananas, processed farm produce, horticultural crops, and many others.

One new product derived from rice is Diamond Fresh Rice Milk Drink which was showcased at the trade show. No, the product is not a concoction of rice and milk from dairy cows that you may be thinking about. It is an extract from young rice grains in their milky stage which is 7 to 12 days after pollination. The product is claimed to contain bioactive substances such as antioxidants, non-starch polysaccharides, plant sterol, oryzanol, enzymes and vitamins that are good for human wellness.

The Rice Milk Drink is considered an organic product which contains low sugar, low fat, low glycemic index. It has a pleasant taste and is easy to digest.

Rice Milk Drink comes in plastic bottles with two variants. Berry Rice is derived from colored rice. The other comes from Jasmine rice. One bottle costs 40 baht or the equivalent of about P65. There’s an 8-pack handy carton which is perfect for gift giving.

Diamond Fresh was supported by the Agricultural Research Development Agency (ARDA), and the Institute of Agricultural Product Innovation.

It is certified organic by ACT, International Federation of Organic Agriculture Movements (IFOAM), and EU Equivalent.

The Chiang Mai Black Pig was developed into a big swine by crossing two native pigs from Thailand with imported breeds. The researchers crossed the Pietrain with the native with brownish coat. On the other hand, the Meishan pig, also a native, was crossed with Duroc. The purpose was to produce a pig with black coat that is bigger and with excellent eating quality for niche markets.

The Paris-based Salon de la Machine Agricole (SIMA), one of the biggest agricultural trade show organizers in Europe, staged the Asean edition of the trade exhibition for the first time last year in Bangkok. The second edition was held last June 6-8, 2018. It is a promising trade show that will keep the Asean farmers abreast of the latest developments in agriculture. Among the SIMA officials we met in Bangkok were Jean Hugues Barsot, key account manager, and Gillaume Cointereau, communication manager. Sophie Huoch, a young staff coordinator, was most helpful in attending to the needs of the hosted visitors.

SIMA was created by the French Association of Agricultural Machinery Manufacturers under the company called Exposima. The SIMA Europe is staged in a 30-hectare venue every two years and the 78th edition will be held in February 2019 in Paris. In 2017, the show was attended by 232,000 visitors from 145 countries around the world. The exhibitors, on the other hand, numbered 1,270 companies consisting of big names in farm mechanization and other sectors.

The trade shows have contributed tremendously to the widespread dissemination of the latest technologies in agriculture around the world. And of course, it is a profitable business for the organizers. It is also a win-win situation for the farmers, businessmen, and other stakeholders.