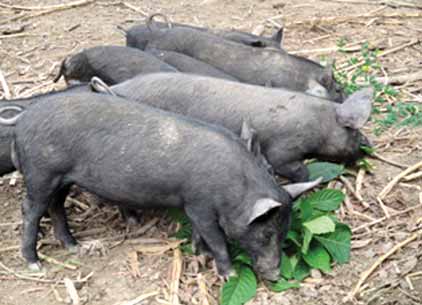 It is a well-known fact among lechoneros (pig roasters) in La Loma, the lechon capital of the Philippines, that the best pig to roast are the native black pigs of Marinduque. Because of the big demand for this native swine, the Marinduque State College (MSC) Torrijos Branch is propagating it to meet the requirements of the roasted pig market in Metro Manila.

There is no better indicator of a seriously good party than a whole lechon (roast pig). For centuries, lechon has been the hallmark of the no holds-barred celebration. It is a timehonored indicator of social status and generosity in the Philippines. One of the largest sources of this delicacy is in La Loma, Quezon City.

The word lechon originated from the Spanish term leche (milk), alluding to the immaturity of the piglet. In the Philippines, it has now come to refer to roasted pig in general. Suckling pigs are referred to as lechon de leche, which corresponds to cochinilloasado in Spain. A suckling pig is slaughtered between ages six weeks to two months. The texture of the meat can be somewhat gelatinous due to amount of collagen in a young pig.

A close-up of lechon.

Lechon is a popular food not only in the Philippines, but also in the former Spanish colonies like Cuba, Puerto Rico, the Dominican Republic, and in the non-Muslim North Sulawesi province of Indonesia.

Lechon is prepared throughout the year for many special occasions, during festivals, and the holidays. Marinduque’s native black pig is the most preferred swine by lechoneros in the lechon epicenter of La Loma in Metro Manila because of its crispy skin when roasted and lean and tasty meat.

After seasoning the pig, it is cooked by skewering the entire animal, entrails removed, on a large stick and roasting it in a pit filled with charcoal. It is roasted on all sides for several hours until done. The process of cooking and basting usually results in crisp pork skin, which is a distinctive feature of lechon.

“The Philippines has four endemic species of wild pigs,” explains Dr. Arnolfo M. Monleon, campus director of the Marinduque State College Torrijos. “These are the Visayan warty pig (Suscebifrons), the Philippine warty pig (Susphilipenensis), Oliver warty pig (Susoliveri), and the Palawan bearded pig (Susanoenobarbus),” he continues. “Marinduque is the center of (propagation) of Sus philippenensis, with a sub-species Sus marinduquensis. “Marinduque has a swine population of 3,000 sows.”

A male native pig has a well-built body, with a coarse, thick black color coat. It has elongated snout, small ears and eyes. It is mostly feed on leaves, roots, tubers and other vegetation by making use of their movable snouts to dig the ground for their food. Its snout is used for their excellent sense of smell. Unlike the impression of many, pigs are very clean animals. They make sure their toilet area is far away from where they eat, lie down, and rest, even a piglet will find a place to go to the toilet far away from where they rest. They have a lifespan of nine to 15 years.

At the nucleus farm at the Torrijos Branch of MSC, the population of native pigs is 186, with 17 sows, nine of whom are pregnant and the rest are boars, piglets, and growers.

“Here, we feed the pigs with trichanthera leaves,” says Monleon. “Native to Colombia and Venezuela in South America, it’s a shrub growing up to five meters and is cultivated as an animal fodder and is fed to pigs, ducks and rabbits,” he adds. Its leaves are relatively rich in protein.

“Trichanthera can replace about 20 to 30 per cent of the commercial diet of growing pigs. Six kilograms of fresh leaves consumed by the pigs per day is equivalent to one kilogram of mixed feeds saved,” concludes Monleoan.

So, next time you bite a crunchy piece of skin of lechon, for sure the roasted pig was a native black pig from Marinduque, geographically the heart of the archipelago and the origin of the tasty lechon you are eating.